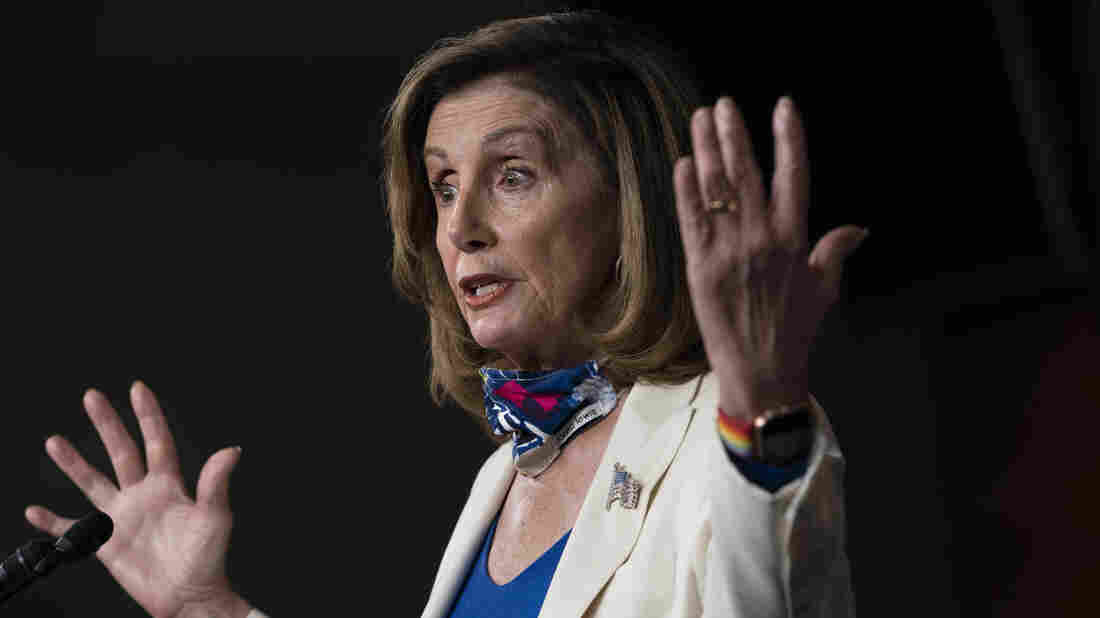 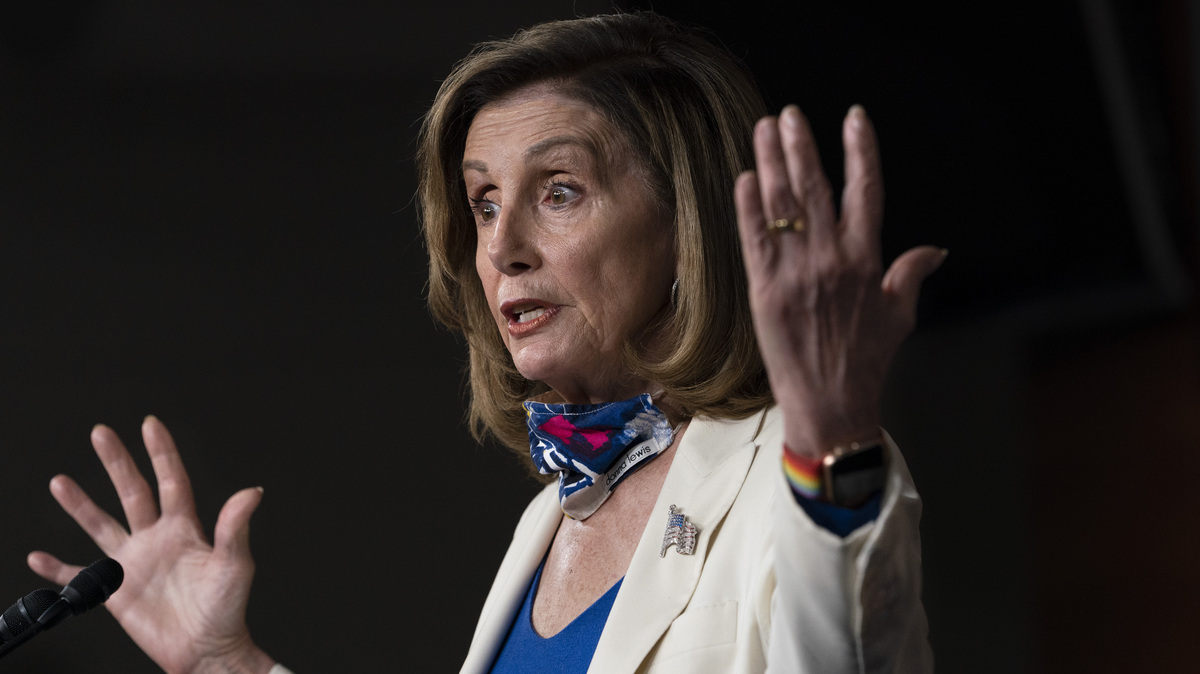 Along with well wishes for a speedy recovery, Democratic lawmakers are lodging some criticism at President Trump following his positive coronavirus test.

“We all received that news with great sadness,” House Speaker Nancy Pelosi told MSNBC. “I always pray for the president and his family that they’re safe.”

“This is tragic, it’s very sad, but it also is something that going into crowds, unmasked, and all the rest, was sort of a brazen invitation for this to happen,” Pelosi said, adding that she hoped the news would be a message to others to follow guidelines for avoiding the spread of the virus.

Pelosi said that she was tested this morning but has not yet received her results. Republican Sen. Mike Lee of Utah said he has tested positive for the coronavirus as well. He was at the White House on Saturday meeting with Judge Amy Coney Barrett — they were photographed without masks. Lee said the test he took while visiting the White House was negative.

“Let us all just pray for the president’s health. Thank God the vice president has tested negatively and the second lady as well,” Pelosi said.

Pelosi said about the negotiations on a coronavirus relief bill, “this kind of changes the dynamic,” adding, “they’re seeing the reality as we’ve been saying all along:”

She said she was in touch with Treasury Secretary Steve Mnuchin, who she met with in person, and notified her early this morning he tested negative.

The speaker, who is second in line of succession after the vice president, said she said she hasn’t talked to anyone in the White House about any plans, but downplayed that issue saying it is the military that handles that issue and “continuity of government is always in place. “

“Maybe this will be the moment where people will say, ‘O.K., masks, distances, sanitation, tracing, treatment.'”

Senate minority leader Chuck Schumer said he wished the president and first lady a “speedy recovery,” and echoed some of Pelosi’s criticism of the president’s pandemic response. “What happened to President Trump is a reminder of why the whole country, including Senators and staff, must follow the science and follow the protocols laid out by the CDC and public health officials.”

Just finished a great phone call with @POTUS. He’s in good spirits and we talked business — especially how impressed Senators are with the qualifications of Judge Barrett. Full steam ahead with the fair, thorough, timely process that the nominee, the Court, & the country deserve.

Other members of Congress have been reacting to the president and first lady’s positive tests, with lawmakers from both sides of the aisle expressing hopes for a quick recovery.

Sen. Mitt Romney, R-Utah, tweeted “Ann and I wish the President and First Lady a swift and complete recovery. Our prayers are with them and all the others who have been afflicted with illness.”

Ann and I wish the President and First Lady a swift and complete recovery. Our prayers are with them and all the others who have been afflicted with illness.

Sen. Chuck Grassley, R-Iowa, at age 87, is the second oldest member of the Senate, and is president pro-tempore of the Senate, which is third in the line of succession to the presidency. A spokesman says Grassley “will continue to follow guidance from the Senate’s attending physician, the CDC and local health officials. We are not aware of any exposure to anyone who has tested positive for COVID-19. Sen. Grassley continues to take precautions to defend against contracting the virus.”

Sen. Chris Murphy, D-Conn., tweeted that “There will be a lot to say about this, but let’s start here: The President and the First Lady have a serious, deadly virus and we should all hope for a full recovery.”

There will be a lot to say about this, but let’s start here: The President and the First Lady have a serious, deadly virus and we should all hope for a full recovery. https://t.co/kGp7IV2LuO

Rep. Dean Phillips, D-Minn., expressed his good wishes for the Trumps, but also expressed concern for residents of his district. Trump held a fundraiser and rally in Minnesota Wednesday. Phillips tweeted that “COVID-19 is a serious and unpredictable disease, and I wish the President, First Lady, and Hope Hicks a speedy recovery. I also have those in my district in Minnesota who may have been exposed on my mind.”

COVID-19 is a serious and unpredictable disease, and I wish the President, First Lady, and Hope Hicks a speedy recovery. I also have those in my district in Minnesota who may have been exposed on my mind. https://t.co/pKSDghZj9n

Other lawmakers told of how the disease has affected them and their families. Rep. Joaquin Castro, D-Texas tweeted that “My dad, 80, had it and was asymptomatic. My stepmom, 78, got it and died.”

It’s so hard to reliably predict how each person’s body will handle COVID-19. My dad, 80, had it and was asymptomatic. My stepmom, 78, got it and died.

I spoke to a friend a few days ago who battled it for 3 months in the hospital, nearly got taken off life support but survived. https://t.co/WPVERa7Dkm

Other lawmakers expressed hope that the President’s illness will lead to better health care for all Americans. Rep. Nanette Diaz Barragán, D-Calif., tweeted that the president “will get treatment other Americans cannot,” and that “All Americans deserve the same care.”

200k+ Americans have died of COVID-19. No one wants more deaths. The President will get treatment other Americans cannot – rapid/multiple COVID testing, top notch healthcare with daily doctor assessments and who knows what prescriptions. All Americans deserve the same care.

Andrew and I are hoping the President, First Lady, and their staff recover quickly from this virus.

This is a serious disease. Everyone please continue to remain vigilant — wear your masks, maintain social distance, and wash your hands often.

Coronavirus shutdowns an Earth Day 2020 gift to the environment

20 years from now, our houses will have mirrors that provide us design ideas...

9 months on, India refuses to restore 4G connectivity in Kashmir

‘Clients Will Pass Away’: One County’s Difficulty To Trump’s ‘Conscience Rights’ Guideline