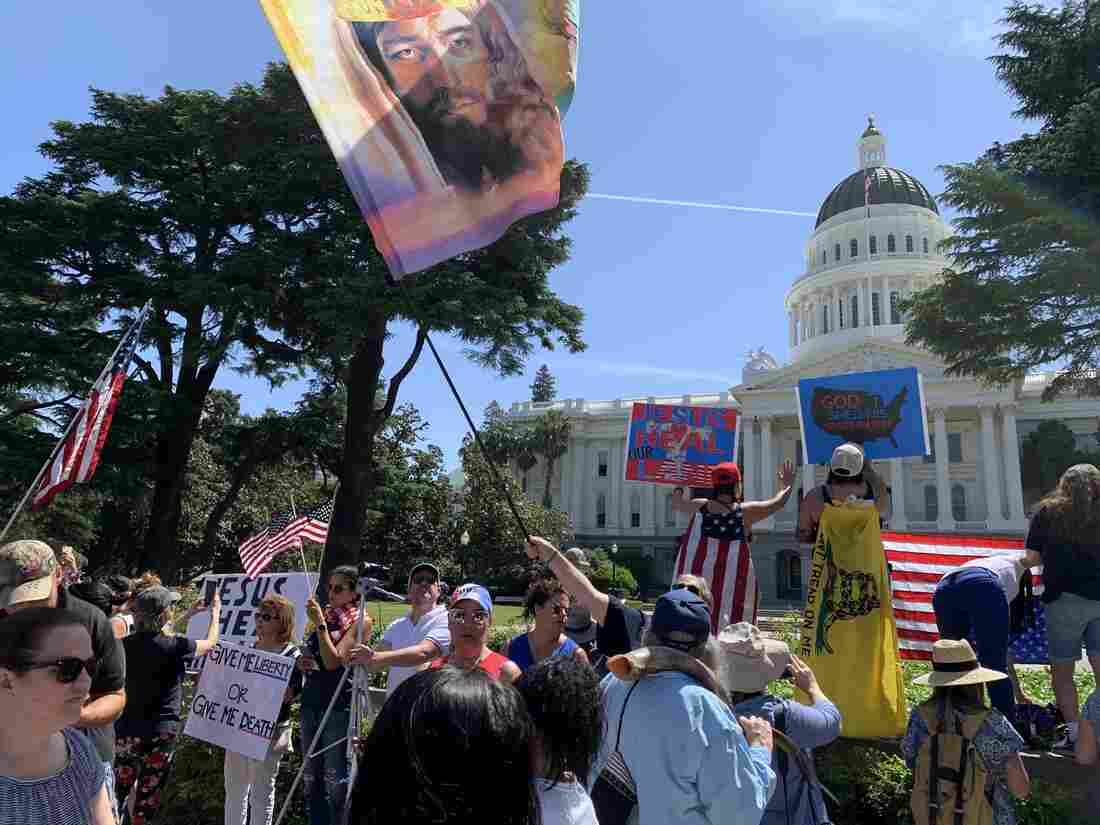 Among those protesting stay-at-home orders this week at the California Capitol in Sacramento were activists who oppose governments requiring vaccinations for school children. 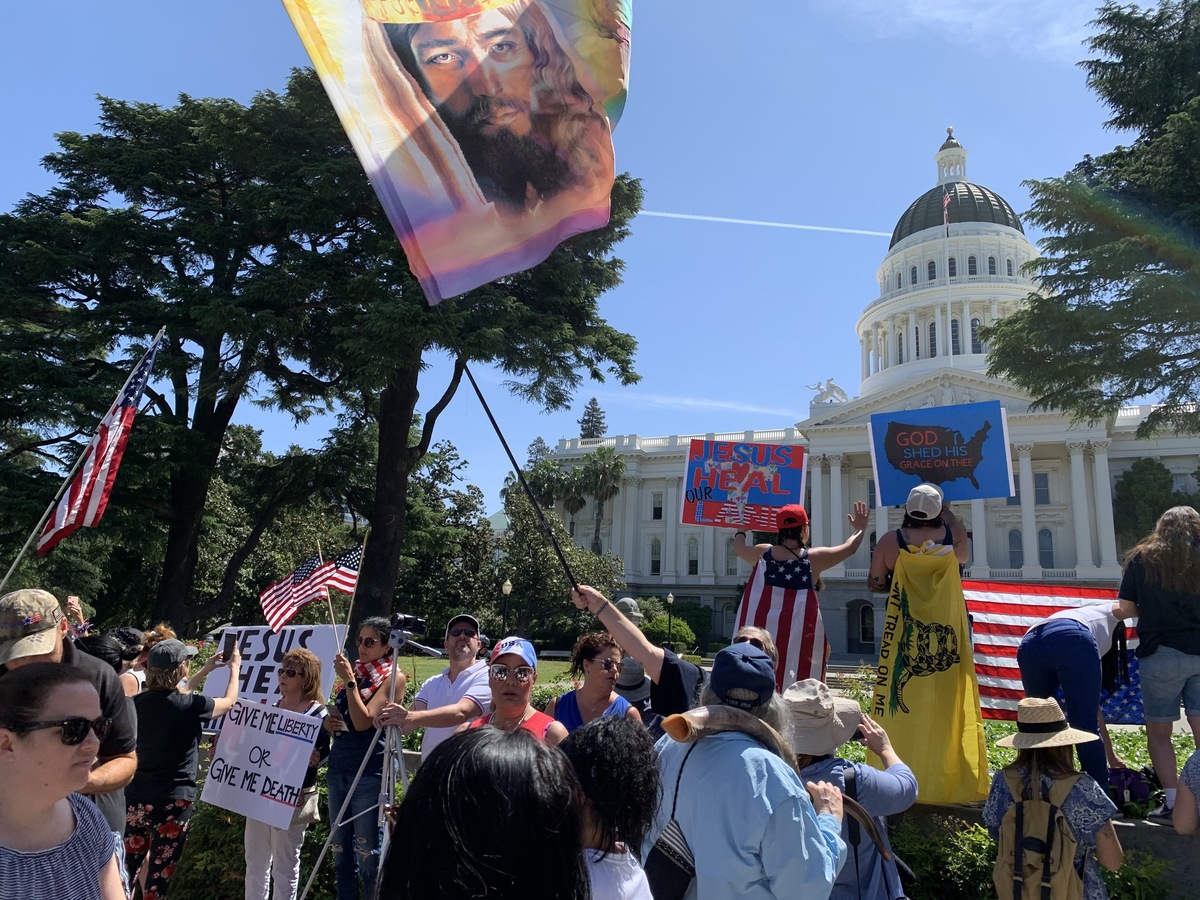 Among those protesting stay-at-home orders this week at the California Capitol in Sacramento were activists who oppose governments requiring vaccinations for school children.

Protests over stay-at-home orders because of COVID-19 have become more common around the country. In California, a surprising group is behind some of them: those who oppose mandatory vaccinations.

On Thursday, a mash-up of people mingled on the sidewalk in front of California’s state Capitol in Sacramento. There were Trump supporters wearing MAGA hats and waving American flags. There were Christians, singing along to religious rock songs and raising their hands in prayer. The event’s MC. urged Gov. Gavin Newsom to tune into their event.

“Everybody up at the Capitol, tell Gavin Newsom [to tune in to] 107.9 FM, if he wants to hear what we have to say,” the MC told the crowd over loudspeakers. “It could be kind of good for him!”

There were also mothers with their children at the rally. Many people were not wearing face masks or observing social distancing protocols.

They’d all come out to protest California’s stay-at-home order, put in place to slow the spread of COVID-19. This week’s event was built around the National Day of Prayer, and featured pastors and sermons. But it was organized by a group called Freedom Angels, which was originally formed to fight mandatory vaccine laws in the state.

At the beginning of the rally, the group’s founders took the stage, including Denise Aguilar.

“Hello everybody, my name is Denise, I’m one of the founders of Freedom Angels,” Aguilar said to a cheering crowd. “Thank you guys for being out here to let Gov. Newsom know we’re not going away! We’ve said this for years!”

The group has become a fixture at the Capitol ever since California passed a law requiring school students to be vaccinated and a second law tightening restrictions on medical exemptions for those vaccines. But another Freedom Angels founder, Stefanie Fetzer, said they’re not a single-issue group. She said these events are about promoting personal freedom.

“I think what we’re seeing now is the predictive modeling that they came out with in the beginning didn’t hold true. We aren’t seeing the numbers that they predicted,” Fetzer said. “And instead of backing off of the shutdown and the restrictive measures that Gov. Newsom implemented, he seems to be doubling down.”

Public health advocates point out that the reason those early predictions didn’t come true is that aggressive social distancing measures — including stay-at-home orders — worked. Democratic state Senator Richard Pan, who authored California’s vaccine laws, believes this anti-vaccine group is aligning with others protesting the stay-at-home order as a way to promote their cause. After all, Pan said, a vaccine would eventually allow the economy to reopen.

“They have staged these protests to basically find a way to get media attention for themselves. They fund raise off of their activities as well,” Pan said. “So, frankly, many of the anti-vaxxers who are involved in this are really there for their own interests.”

It’s common for anti-vaccine groups to latch onto other controversial issues, according to epidemiologist and vaccine educator René Najera. For instance, he points to abortion.

“They try to say that there are aborted fetal cells in vaccines — which there are not — to try to get the anti-abortion people on their side,” he said. “And then they flip it around and say, also, ‘My body, my choice.'”

Najera said those tactics can have dangerous outcomes, including making people think twice about getting vaccines. In fact, he said, in 2019 the World Health Organization named vaccine hesitancy, or people’s reluctance to consider vaccination, as one of the world’s top 10 public health challenges.

Najera is confident vaccine opponents aren’t going away. He says, if anything, the rise of social media has made it easier for them to spread their message. What he finds most frustrating is that these anti-vaccines protesters aren’t just making choices that affect their own families. Najera says choosing not to vaccinate their children and joining other large protests to spread their message puts the health of everyone at risk.

For Impairment Activists, 3 Weeks In Oregon Is A Video Game Changer

Ecological activists are incredibly gluing themselves to structures on Capitol Hill

Sleeping Illness Can Drive You Mad. However Therapy Is Now Simpler Than Ever

The WWDC Liveblog: All the OS information from Apple’s yearly keynote