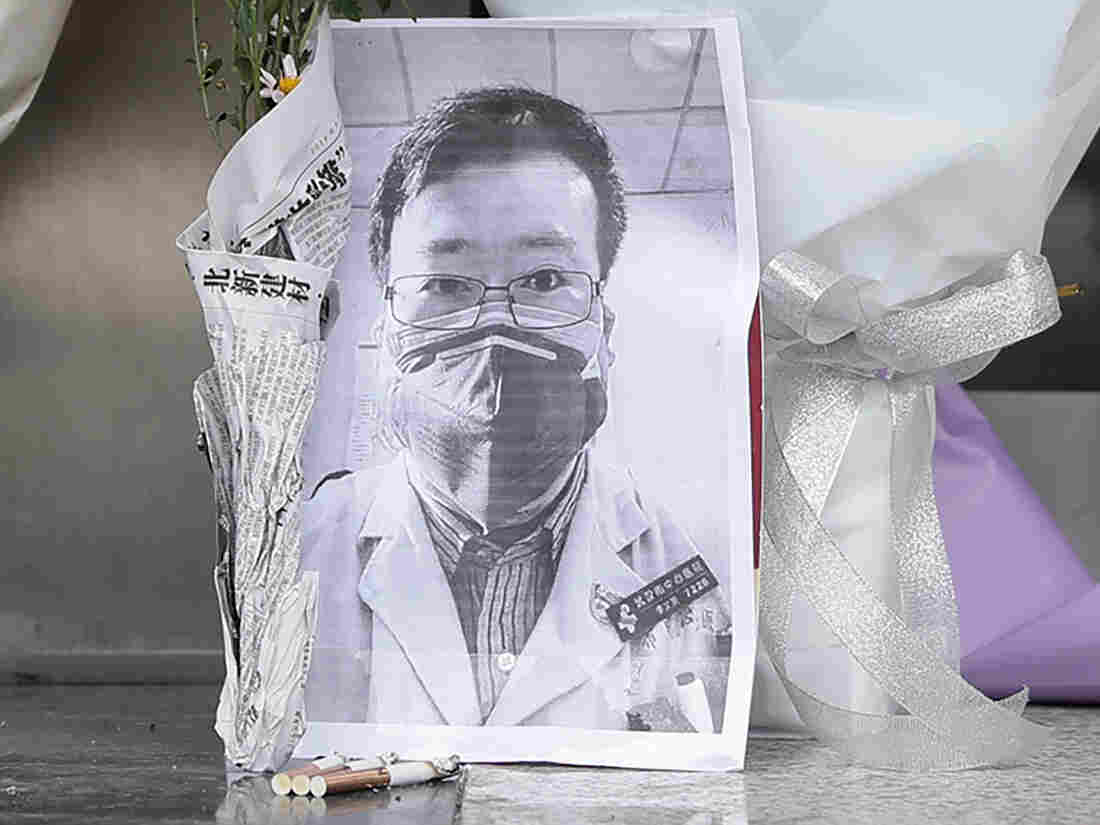 A photo of the late ophthalmologist Li Wenliang is seen with flower bouquets at the Houhu Branch of Wuhan Central Hospital in Wuhan, central China, on Friday. Li, who is being hailed for his efforts to alert the medical profession to the new virus, died Friday after becoming infected. 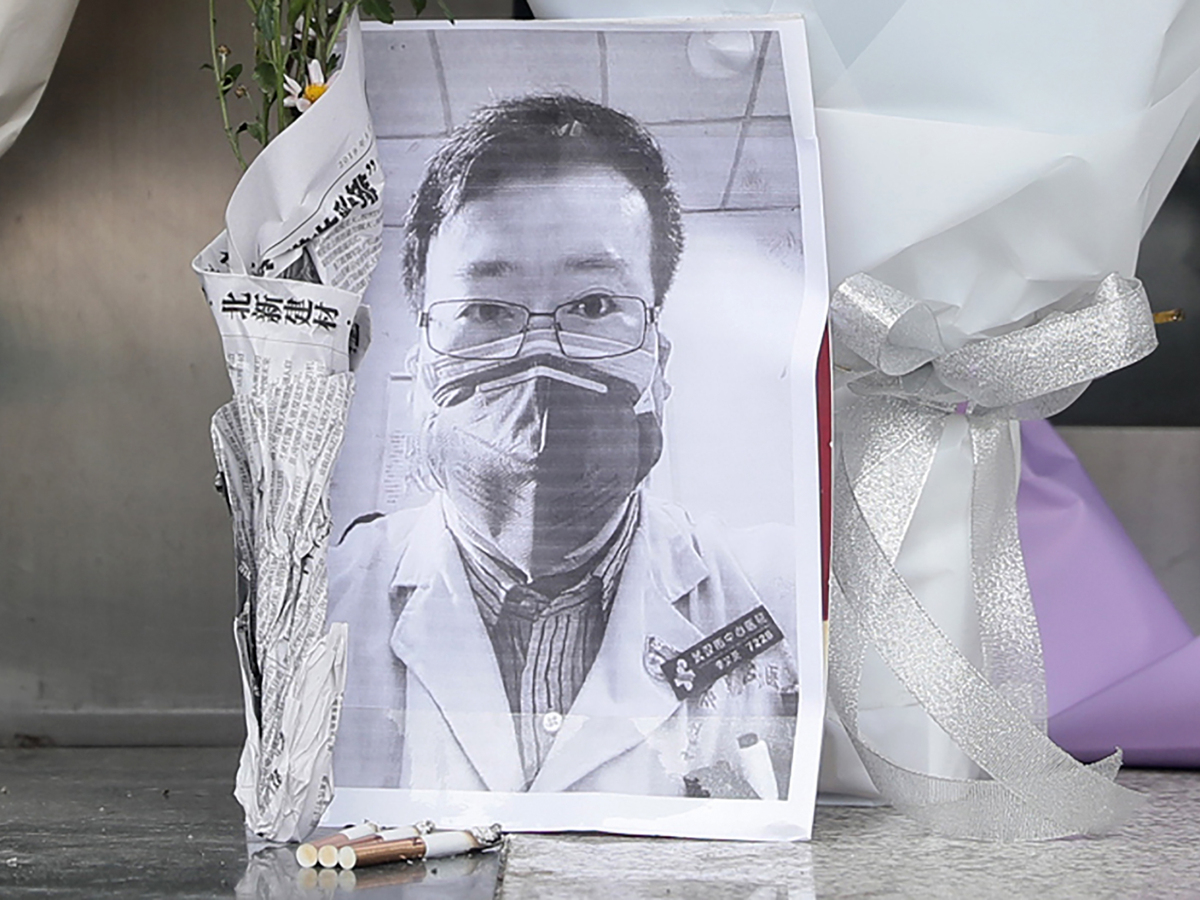 A photo of the late ophthalmologist Li Wenliang is seen with flower bouquets at the Houhu Branch of Wuhan Central Hospital in Wuhan, central China, on Friday. Li, who is being hailed for his efforts to alert the medical profession to the new virus, died Friday after becoming infected.

China says it has launched an investigation into “issues” related to the death on Friday of a doctor whose early efforts to alert his colleagues to the dangers of a new coronavirus were quashed by authorities.

Meanwhile, President Trump spoke with China’s leader Xi Jinping to discuss the coronavirus epidemic, which has rapidly gone global since it began in China in December.

Dr. Li Wenliang, an ophthalmologist working in Wuhan, the Chinese city where the epidemic originated, died on Friday local time, weeks after he was hospitalized and treated for coronavirus infection.

Li, 34, had first sought to warn his college classmates in the medical profession of the disease in late December. Using the popular Chinese social media platform WeChat, Li wrote that he had become aware of several cases similar to severe acute respiratory syndrome, or SARS, another coronavirus that killed nearly 800 people in a 2002-2003 outbreak that Beijing initially tried to cover up.

However, within days, local police paid him a visit and reprimanded him for the posts. He signed a statement on Jan. 3, a copy of which has circulated online in China, in which he acknowledges making “false statements.”

“This is a type of illegal behavior!” the statement said, according to The Associated Press.

Days later, Li himself was hospitalized with coronavirus infection.

After the announcement of his death Friday, China’s National Supervisory Commission, the country’s top anti-corruption body, said it would send a team to Wuhan to “thoroughly investigate issues related to Dr. Li Wenliang,” according to the official Xinhua news agency.

The report did not specify what exactly would be investigated, but it comes within a broader context of growing criticism of Beijing for its handling of the crisis. China was initially praised for being quicker to seek international help than it did during the SARS outbreak; however, in recent days it has become more clear that in the initial phase of the epidemic, authorities may have been less than transparent.

Li is one of several whistleblowers in the medical profession who tried to sound the alarm but were apparently shut down by authorities in the crucial first weeks of the outbreak. News of his death on Weibo, China’s equivalent of Twitter, sparked an outpouring of sympathy and rare expressions of anger at authorities, according to the South China Morning Post.

At latest count, the 2019-nCoV virus has infected 31,426 people worldwide and killed 638. Although the vast majority of infections and all but one death have occurred inside China, worldwide concern about the virus’ spread has caused authorities across the globe to evacuate their personnel from China, cancel flights and quarantine arriving passengers.

While the new coronavirus, which can cause a form of pneumonia, has a relatively low mortality rate compared to SARS or even the seasonal flu, scientists are concerned that since it presents with only mild symptoms in many people that it might spread easily and then mutate into a more lethal strain.

Trump and Xi, during their phone call, discussed China’s efforts to contain the outbreak, according to a summary provided by Xinhua. It said president Xi told Trump that no effort had been spared to combat the virus, calling the effort a “people’s war” against the epidemic.

Beijing has repeatedly criticized Washington’s decision to temporarily close the U.S. consulate in Wuhan and to evacuate its diplomats from the city. The U.S. has also decided to bar any foreign nationals from entering the U.S. if they have been to China in the last 14 days. The State Department has also raised its travel alert for China to the highest level.

Late Thursday, the Department of Defense issued a statement saying it was preparing to receive two State Department chartered flights from Wuhan with 300 passengers who will be placed in a two-week quarantine once they arrive in the United States. One is scheduled to refuel at Travis Air Force Base near San Francisco, then continue to Omaha, Nebraska, via Lackland Air Force Base. The second is heading for Marine Corps Air Station Miramar in San Diego, via Vancouver, B.C.

What Is A Information Science Mindset — And Does Pharma R&D Actually Want One?

Earth Is Spiraling Away From The Sun For Now, But Will Eventually Crash Into...

Planned Being A Parent To Withdraw From Title X, Unless Court Intervenes