Science and Tech News
Home coronavirus Coronavirus FAQ: Is It Safe To Get On The Bus (Or Subway)? 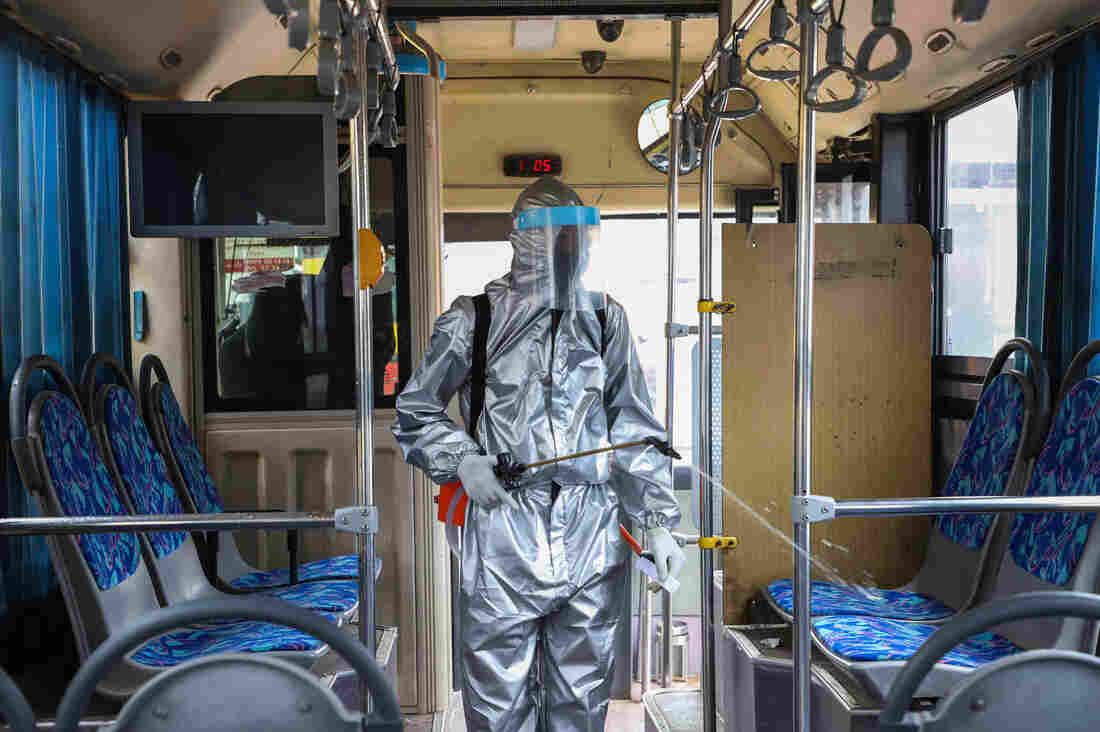 A worker disinfects the inside of a bus in Addis Ababa, Ethiopia. Transit agencies are taking new steps to reduce the risks for riders during the pandemic. 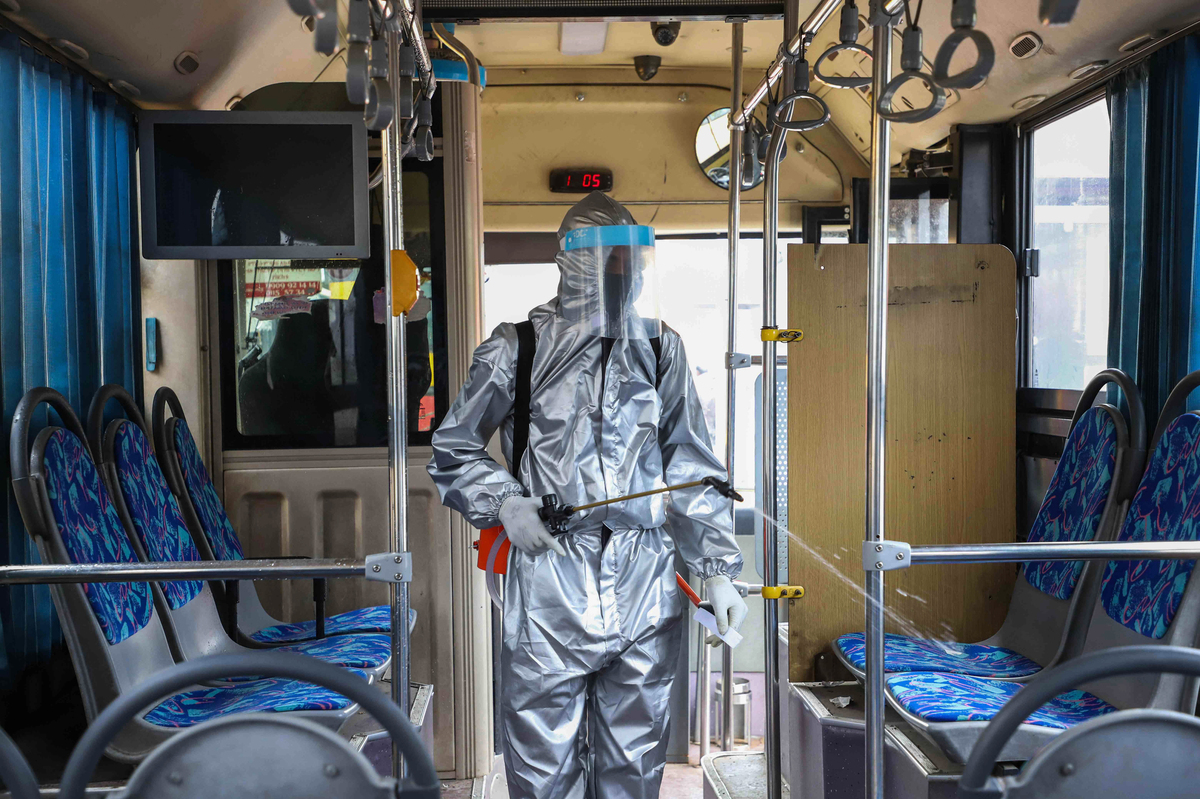 A worker disinfects the inside of a bus in Addis Ababa, Ethiopia. Transit agencies are taking new steps to reduce the risks for riders during the pandemic.

Each week, we answer “frequently asked questions” about life during the coronavirus crisis. If you have a question you’d like us to consider for a future post, email us at goatsandsoda@npr.org with the subject line: “Weekly Coronavirus Questions.”

Is it safe to take public transit?

It’s one of those tricky COVID-19 things to navigate … no pun intended.

On the one hand, data reveals that people are staying away from mass transit in huge numbers compared to before the novel coronavirus. In New York City, for instance, subway ridership is at just 20% of its 5.5 million weekday riders pre-pandemic.

Transit, a mobile app providing real-time public transit data, analyzed 139 transit agencies spanning 68 metro areas and 6 countries and found that demand for public transit has dropped 53% since the onset of the pandemic.

People are understandably worried about the risks of contagion and being trapped in an enclosed space for the duration of a trip.

But ridership is beginning to rebound. Since April, the Transit app data shows, the number of those taking public transit has slowly but steadily increased.

Plus, for many, like essential workers, stopping commuting wasn’t a choice, as Stephen Morse, professor of epidemiology at the Columbia University Medical Center points out.

“Many of us may have no alternative – especially when it comes to essential workers, who, in New York, travel from various boroughs to work,” says Morse. “There’s no alternative to mass transit.”

Unfortunately, few academic studies have systematically looked at the risk of mass transit — although case studies from public health authorities in Paris, Austria and Tokyo have been unable to tie any group of outbreaks to rail lines or city public transportation.

Nonetheless, Morse and other public health specialists urge that mass transit be approached with caution.

Morse says that with all public transit — buses, subways, trains — there is always some risk of infection. After all, you are entering a public space. But he says it’s possible to reduce that risk significantly by wearing a multi-layered mask and maintaining good hand hygiene — in other words, doing the 20-to-30 second wash before and after.

Robyn Gershon, a clinical professor of epidemiology and public health disaster researcher who has studied the impact of COVID-19 on transit workers, says you can divide the safety of motorized transit options into tiers.

Safest is driving your own car, but of course, not everyone owns or can even afford a car.

Rideshare apps like Uber come next, but they’re a little challenging in terms of evaluating risk, Gershon says. It’s a good sign when your driver has put up panels that create a barrier between the front and back of the car, wears a mask and keeps the windows open to encourage ventilation and airflow. Such measures help reduce the risk of viral particle exchange between you and your driver.

Buses and subways represent the final — and greatest — tier of risk. Gershon says buses might pose even more potential risk, because it could be harder for passengers to maintain distance from each other while subways tend to have several cars on a train, offering a greater opportunity to stay 6 feet or more from others.

“I think you can prudently ride the subway if you’re reasonably healthy and have no other risk factors,” Gershon says. “But also, where are you going? — to a bar? To your workplace? This also matters in terms of assessing risk.”

Part of the reason Gershon and Morse feel more confident about the subway: Transit agencies around the world are taking impressive efforts to get squeaky clean.

Gershon gives the example of New York’s MTA: “They started a very extensive and exhaustive program of deep cleaning — those subways have been more clean than, like, forever,” she says. “They shut them down every day from 2 to 5 a.m. to clean.”

In addition, the New York subway system uses HVAC systems in each individual car, which turn over air quickly and filter out viral particles, Gershon says. That may aid in mitigating some of the risk associated with a respiratory disease.

These protective efforts are going on around the world. In Ethiopia, authorities have begun disinfecting public buses to reinstill confidence in transit. Hong Kong has successfully used a disinfection robot to spray bleach in train waiting areas. In Prague, authorities disinfect 10 to 12 trams a day with a deep cleaning. And Seoul has set up isolation rooms in case transit workers develop symptoms.

Meanwhile, transit agencies are taking other steps besides cleaning and mandating face masks. Some systems are increasing service to reduce overcrowding.

You can read more about steps taken by different transit authorities in this report from the International Association of Public Transport.

Wherever you are, if you’re taking public transit, Gershon recommends wearing a mask with at least four layers — for example, both a cloth and surgical mask— and to avoid touching your cellphone or face once you board. (If you can’t keep your hands off your phone, wipe it down with a sterile alcohol wipe and wash your hands with soap and water after disembarking.)

“The first thing to think about is: How are you going to protect your nose, mouth and eyes,” Morse says. “The main concern is that you might pick up the virus from your fingers, whether [by touching] a floor, a pole on the subway, something you hold onto or an inanimate object” — and then touch your face.

Another point to consider before riding: local rates of transmission.

“You should see: Are cases high or are they coming down?” Gershon says. She urges transit patrons to tailor their behaviors to regional trends.

“Quite frankly, I feel the subways [in New York] now are relatively safe,” Gershon says. “It’s definitely better than a bar where people are chewing or talking — that’s probably the riskiest thing right now.”

Pranav Baskar is a freelance journalist and U.S. national born in Mumbai.

Physicians and cosmetic surgeons when again command the greatest pay in the United States....

We Asked, You Responded To: Are Fly-In Medical Missions Useful Or Hazardous?