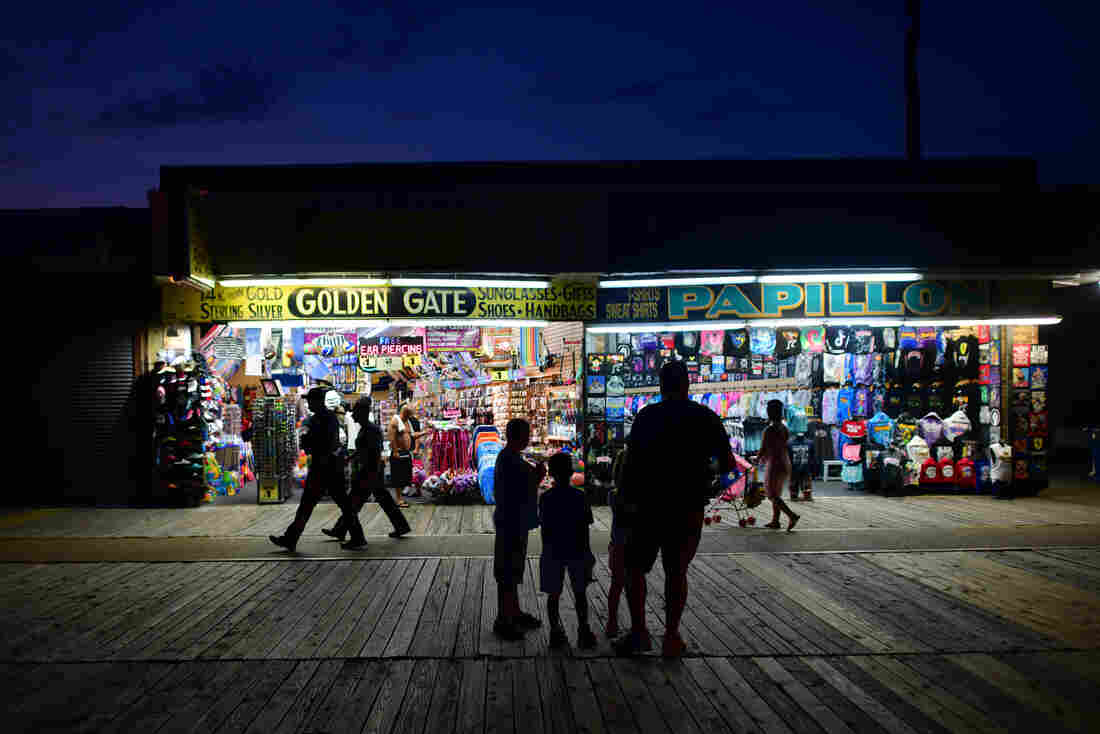 People walk the boardwalk on July 3 in Wildwood, New Jersey, after some coronavirus restrictions were lifted. There’s concern that case counts could push back up in Mid-Atlantic and Northeastern states. 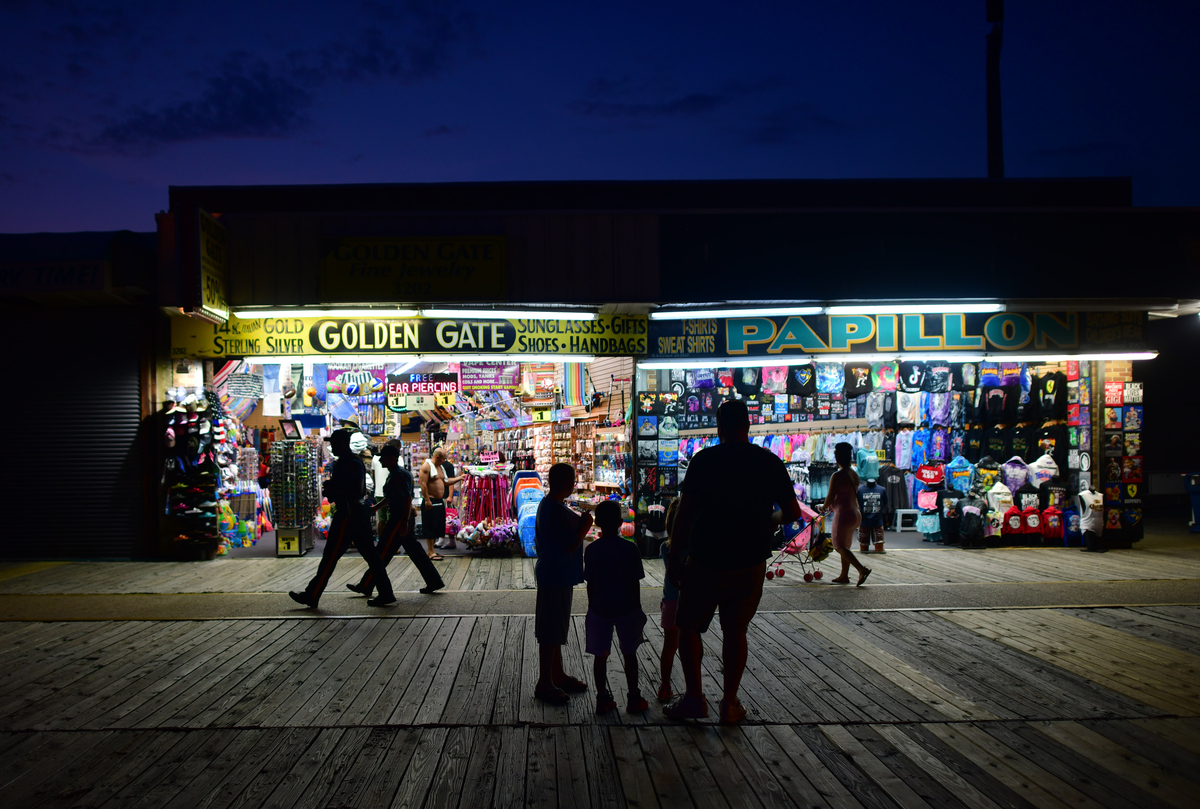 People walk the boardwalk on July 3 in Wildwood, New Jersey, after some coronavirus restrictions were lifted. There’s concern that case counts could push back up in Mid-Atlantic and Northeastern states.

For weeks the U.S. coronavirus pandemic has largely been driven by spiraling outbreaks in the South and West. But some forecasters say Mid-Atlantic and Northeast states could soon be in deep trouble again too.

The warning comes from researchers at the PolicyLab at Children’s Hospital of Philadelphia, which has built a model to provide four-week forecasts for every U.S. county. NPR spoke to David Rubin, PolicyLab’s director, an epidemiologist and professor at University of Pennsylvania. Here are five takeaways.

The virus is marching up the East Coast

Rubin says in recent weeks there’s been a noticeable trend of rising cases moving northward from Florida “up travel corridors like I-95.”

Over the last two weeks, he notes, “the highest infection rate of case growths we’ve seen in a major city in this country have been in Baltimore, Maryland.”

And, he adds, “we are now seeing a clear resurgence in the Philadelphia area and [surrounding] counties. We’re starting to see upticks in the shore regions of New Jersey. And we’re actually seeing some elevated [transmission rates] every week in the New York City boroughs.”

New England is also at risk: “[Transmission rates in] New Haven are clearly increasing. The state of Rhode Island broadly has increasing transmission. And in the Boston area, we’re seeing the same patterns we saw a couple of weeks ago in Philadelphia. We even now have an outbreak on Cape Cod. And we’re seeing [more of the virus] in New Hampshire.”

The eastern seaboard isn’t Rubin’s only concern. He’s “extremely worried” about a number of Northern and Midwestern cities such as Indianapolis, Detroit and Milwaukee that “no one is talking about now but [for which] our models very clearly are detecting elevated risk for the next few weeks, not just in the cities but in their suburban counties.”

The current low case numbers are obscuring the looming problem

Rubin says in many instances, these incipient outbreaks haven’t attracted much attention yet because while the rate of growth in cases is rising, the number of daily new cases is still relatively low — especially compared to the current outbreaks in the South as well as to some of the outbreaks in these same Mid-Atlantic and especially Northern states in the spring.

“When your case counts have been degraded for a while, a doubling [of the numbers] doesn’t look as impressive.” says Rubin. “But those doublings are there.”

“What worries me most about areas like New York and Philadelphia and Boston,” he adds, “is they’re at much higher levels of population density. Even though it may have taken three or four weeks for some of these other areas down South to see exponential growth, our models don’t know exactly how well an area like the Bronx or Queens is going to be able to contain transmission if it becomes widespread there.”

The prospect of a blow-up in New York seems all the more poignant given how devastating the spring outbreak was there — and how successfully the subsequent shelter-in-place strategy proved in bringing the caseload down.

“I give all the credit to the leaders throughout the Northeast region who really handled this crisis the way it needed to be handled,” says Rubin. Not only did they institute strict social distancing, he notes, they kept it in place long enough to bring daily new infections to manageable levels and eased up on social distancing slowly.

“I saw areas in the Northeast wait an extra week or two — to great frustration of residents — because they weren’t satisfied they had degraded their counts enough,” says Rubin. “So it was reopening later but also [doing so] more cautiously and slowly that helped these areas.”

Unfortunately, he says, much of the South followed the opposite pattern. He says that they failed to keep social distancing in place long enough, and then “they pushed very quickly through the gates and they ignored clear warning signs. As their resurgence was really starting to grow they continued to go through the reopening plans.”

This absence of a unified national approach is what is now threatening the Mid-Atlantic and Northeast. “This virus doesn’t know state lines,” says Rubin. “People are traveling — that’s what we do as Americans. We travel. We go on family vacations. And I’ve privately heard officials [in northern counties] express some level of resignation that, ‘We could even go back into sheltering in place. But if families are traveling outside the area and coming back, as soon as we lift those restrictions, the transmission will return.’ “

The surge of cases in the South has also coincided with the summer travel season. At first the impact of this was most noticeable in Southern localities, says Rubin.

“What you saw was major traffic going to some of these vacation destinations like Galveston, Texas. And you could very clearly see within a couple of weeks, the conferred risk not just to Galveston but back up to Houston as people came and went between these major metro areas to their vacation destinations.”

Then, “in the Carolinas, you saw similar things,” says Rubin. “When you look at Hilton Head and Myrtle Beach they really took off in a similar fashion.” (Although Rubin adds that the sheer number of meat and poultry processing plants in the Carolinas also played a role in fueling local outbreaks.)

In recent weeks the trend “has just continued to evolve to Virginia Beach, the Eastern and Western shores of Maryland, the entire Lake Michigan coastline.” Many of those vacation destinations are starting to have some of the highest rates of transmission nationwide, Rubin says. “So very clearly travel is playing a significant role here. People have been penned up in their houses for a long time and are blowing off steam and getting out there.”

Interestingly, efforts by northern vacationers to avoid destinations in the south have only created new problems. “People made logical decisions to try to seek areas where they thought there was less transmission,” says Rubin. “We saw the greatest amount of traffic on the July 4th weekend in New Jersey shore locations as I think people looked at the South and said, ‘We’re going to go North.” But, Rubin says, “this is now conferring new risks to regions that weren’t as impacted before.”

Rubin says he’s seen it firsthand. “I spent a lot of time in upstate New York, and the campsites throughout the Adirondack region are packed right now because there’s nothing to do in the cities. So there’s a lot of spreading out going on this summer, and that is just increasing the amount of mixing that people are doing.”

It’s even creating a noticeable spike in infections in certain rural areas that lie between major population centers and vacation spots. Normally such rural areas are more insulated. But “people are traveling through and when they go to the convenience store or the gas station, that’s where these infections are occurring,” says Rubin. “And so we’re seeing even rural areas really blow up.” These include ones, he adds, “without the health-care resources that are necessary to respond to this challenge.”

It’s not too late

As grim as all this sounds, there is still hope.

For one thing, it’s worth keeping in mind that the forecast from Rubin’s team is one of many models. According to Nicholas Reich, a biostatistician at University of Massachusetts Amherst who has created a system to compare many of the most prominent forecasts, there’s fairly broad agreement among those that forecast the county level that coronavirus infections will increase in Virginia Beach, Baltimore, Detroit, Milwaukee and Indianapolis. But for some other areas — such as Philadelphia, Rehoboth Beach in Delaware and New York City Rubin’s model is noticeably more pessimistic.

Even if Rubin’s predictions are correct, he notes that the Mid-Atlantic and and northern counties that are at risk have an advantage: Because their case numbers are low, if they act now they can bend the curve of infections before large numbers of people contract the virus.

“That’s why we do these forecasts,” he says. “We’re making assumptions [about what could happen two to three weeks in advance] so that people could hopefully calibrate their routines.”

A return to full shelter-in-place is not necessary but people will need to ramp back up their social distancing and step up mask wearing — ideally as part of a nationwide strategy to get case numbers under control across the country by Labor Day.

“We need to be a little bit more proactive in terms of our response and talk about a sacrifice right now,” says Rubin, “for the good of having those school reopenings and getting us back to work in the fall so that we don’t squander all that we have achieved.”

Lost your drive? Here’s how entrepreneurs can recapture their spark

A Bronze Age video game called 58 holes was discovered sculpted into stone in...

Enjoy stargazing while you can, SpaceX Starlink is about to ruin it

YouTube’s strategy to reward ‘quality’ material has some issues