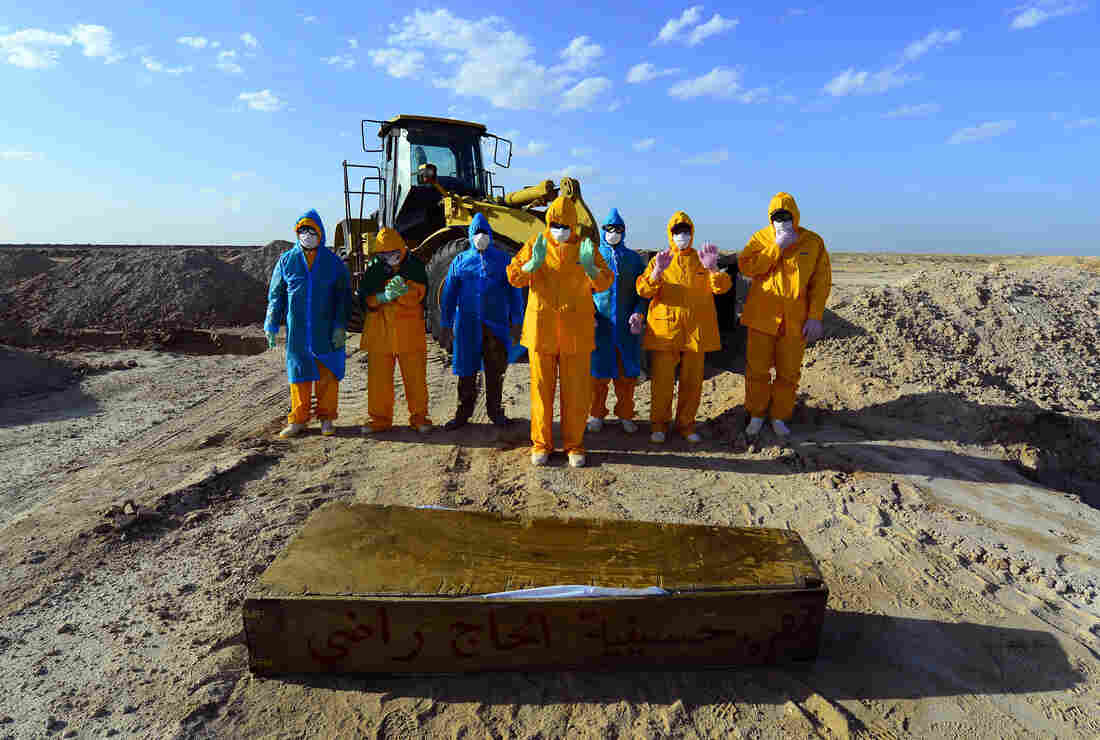 On April 3, Iraqi volunteers in full hazmat gear prayed over the coffin of a 50-year-old who died of COVID-19. She was buried at a cemetery specifically opened for such deaths, some 12 miles from the holy city of Najaf. 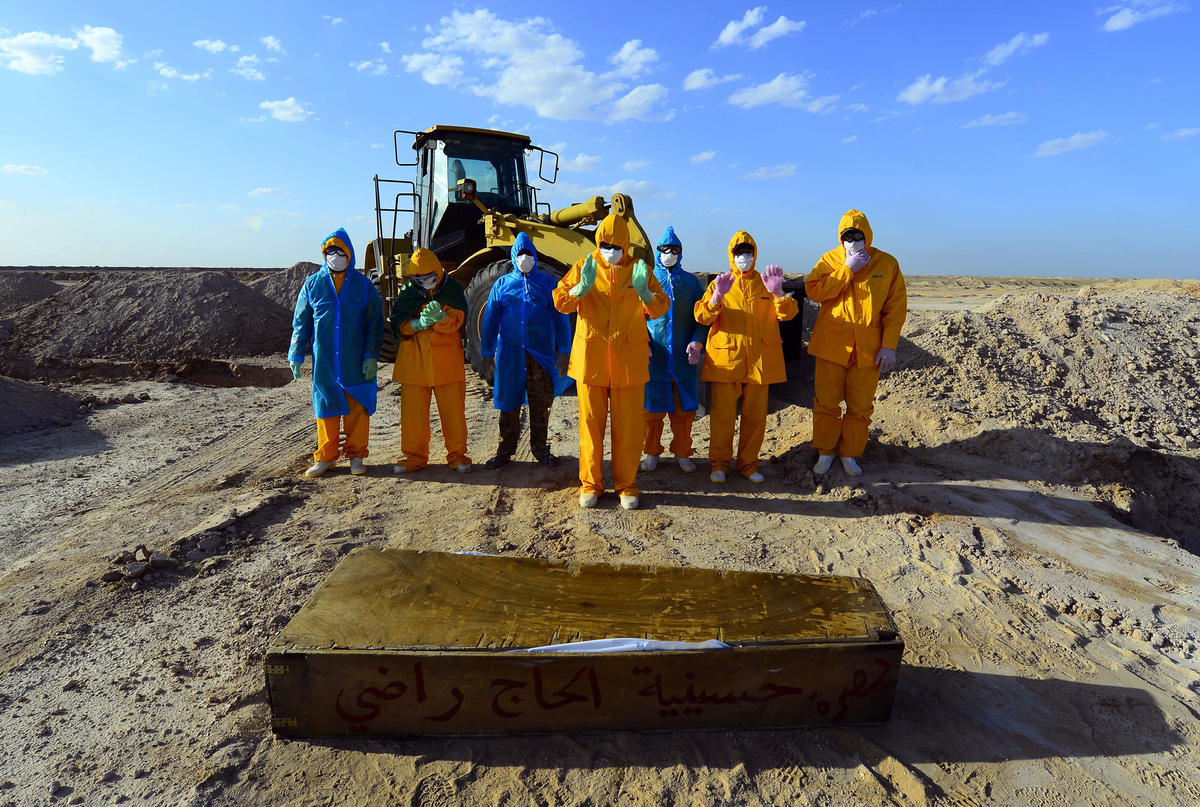 On April 3, Iraqi volunteers in full hazmat gear prayed over the coffin of a 50-year-old who died of COVID-19. She was buried at a cemetery specifically opened for such deaths, some 12 miles from the holy city of Najaf.

For centuries, Hindus gathered to burn corpses on funeral pyres along the Ganges River. Jews received condolences at home during a seven-day mourning period. Muslims huddled together to wash the corpses of loved ones in Iraq and across the Arab world.

But global burial rituals are being dramatically changed by the coronavirus pandemic.

The World Health Organization in its March 24 guidance on burials of COVID-19 victims says dead bodies are generally not infectious. But its recommendations that relatives not touch or kiss the body and government rules on social distancing to prevent the spread of disease have upended important funeral and death rituals in virtually all of the world’s faiths.

Just as the United States now restricts gatherings for funerals, so do countries and religious authorities around the world.

Here, some of NPR’s foreign correspondents share details of how COVID-19 has changed traditions in the countries they cover.

Iraq: Days of delays for some burials

In Iraq, relatives participate in washing the bodies of their loved ones and preparing them for burial. The dead are buried the same day wherever possible. For both Muslims and Christians, deaths are normally followed by three days of condolences held in large tents or mosques or church halls. With the family surrounded by relatives, friends and neighbors, outpourings of grief are expected and often encouraged.

But with the pandemic, such public gatherings of grief are no longer allowed.

“It took eight days to get the body of my father from the morgue,” says Abdul-Hadi Majeed, whose father died of COVID-19 in a Baghdad hospital in March. “It was very difficult arranging the burial.”

Majeed, a soldier, says his father’s body was among a group of bodies the government intended to bury in a field near Baghdad, outside the city. But tribal leaders refused to allow the bodies to be buried there, mistakenly fearing they could spread disease.

So paramilitary forces in hazmat suits took over the process and conducted the burials according to Islamic rites at a sprawling cemetery in the holy city Najaf, south of Baghdad, in a special section of COVID-19 victims.

India: Empty banks on the Ganges, a controversial call for cremation

In India, where the government has reported 124 COVID-19 deaths (as of April 6), new guidelines for disposal of dead bodies, which were issued on March 15. Funerals are now limited to 20 or fewer attendees. Gone are the big, public funeral processions that are a key part of mourning for adherents of many faiths across South Asia.

In the Hindu holy city of Varanasi, on the banks of the Ganges River, a lone Hindu priest now recites a truncated daily prayer as a symbolic gesture to the Hindu goddess Ganga, whom faithful believe embodies the river. Thousands of people — including tourists — used to gather here for sunrise and sunset ceremonies honoring the river goddess. Typically lined with funeral pyres — giant piles of wood set alight to burn corpses — the riverbanks are now largely empty because of a nationwide lockdown,.

Many of India’s majority Hindus believe that being cremated next to the Ganges or having ashes submerged in its waters, ensures salvation. But with limited public transportation and travel curtailed under lockdown, families are unable to transport the bodies or ashes of their loved ones to the river, and there are reports of ashes piling up in crematoriums because families can’t come to pick up the ashes.

A major association of Hindu priests is asking mourners to postpone travel to the northern Indian city of Haridwar, another popular pilgrimage site on the Ganges River, citing a shortage of priests to perform rituals — again, because of the lockdown.

“After the waiver of the [lockdown] restrictions, one can come to Haridwar for ritual ash immersion,” Pradeep Jha, president of the association, called Ganga Sabha, was quoted as saying. “Our [priests] will duly perform the rituals for peace and salvation to the deceased souls.”

The Indian central government’s new guidelines also prohibit bathing or embalming the corpse of a COVID-19 victim and ban relatives from kissing or hugging the body to avoid any risk of transmitting the virus. The rules are carefully worded, without mentioning any specific religion. But body-washing is typically practiced by Muslims, who number at least 180 million in India, and have faced religious discrimination and attacks in the past.

In the commercial capital Mumbai, municipal authorities announced last month that all COVID-19 bodies must be cremated. The order said the city’s burial grounds were in densely-populated areas, which might pose a risk of contamination.

While cremation is most commonly practiced by India’s Hindu majority, it is strictly forbidden in Islam.

After a Muslim politician intervened, the order was withdrawn within hours. Muslims can continue to bury their dead, with the order rescinded.

There is one burial tradition in India that doesn’t involve crowds, and is thus still allowed: Sky burials. Practiced by Parsis, Zoroastrians and some Tibetan Buddhists, adherents place dead bodies on a high platform or mountaintop, and allow vultures to dispose of the remains.

Pakistan, Turkey and Ireland: Grieving at a distance

It was not immediately clear how widely that is being respected, but one video shared from a remote Pakistani province showed a handful of worshippers standing carefully apart as they prayed for a COVID-19 victim about to be buried.

In Turkey, close farewells have been replaced by distance burials. Only those physically involved in the burial are allowed at the pre-burial body washing ritual normally attended by close family members, and only the closest relatives can attend the burial, with the imam praying from a safe distance away, speaking through a mask. Authorities have forbidden mourners from approaching the coffin for a last look or word.

In Ireland, people are determined to pay their condolences despite new rules. Last week, when an elderly resident died in a village in county Kerry, Catholic parishioners lined a more than mile-long road to the local cemetery — socially distanced at several feet from one another — in a tribute that was filmed and shared widely on social media.

Yesterday we buried a lovely woman. Due to #Covid19 there was no wake & our community couldn’t enter the church.

But the entire parish came out & lined the 2km road to graveyard to say goodbye to Betty Ryan.

France and Brazil: No more than 10 funeral guests 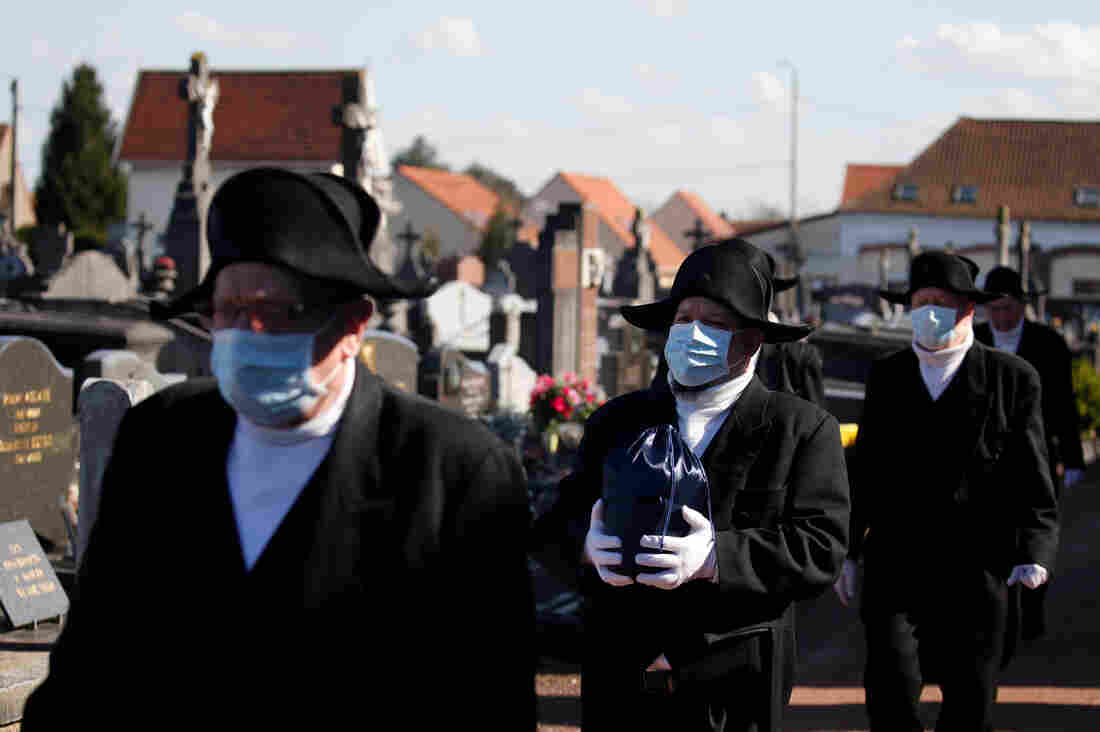 Members of the Charitable Brotherhood of Saint-Eloi de Bethune, which first formed during the plague 800 years ago, carry an urn to a family tomb at the cemetery in Bethune, France. The photo was taken on March 18.

Many countries are limiting the number of mourners allowed to attend funerals. In both Brazil and France, authorities urge people to limit funerals to ten attendees. In Brazil, they also specify that mourners must remain about six feet apart — a stark contrast from traditional funeral gatherings there, which often last all day and are attended by hundreds of people. 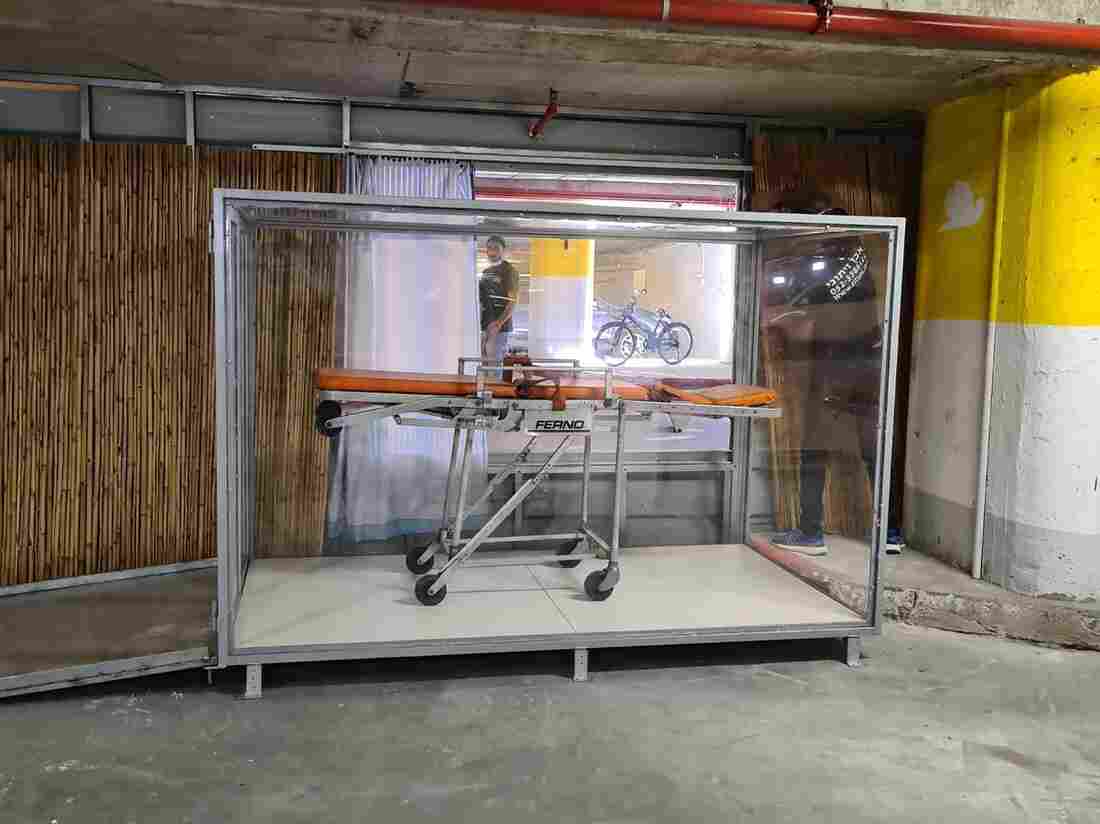 Some Israeli hospitals, like the Sheba Medical Center, place the body of a person who died of coronavirus in a glass booth. That way, families who weren’t able to be with a dying relative can say a last goodbye. 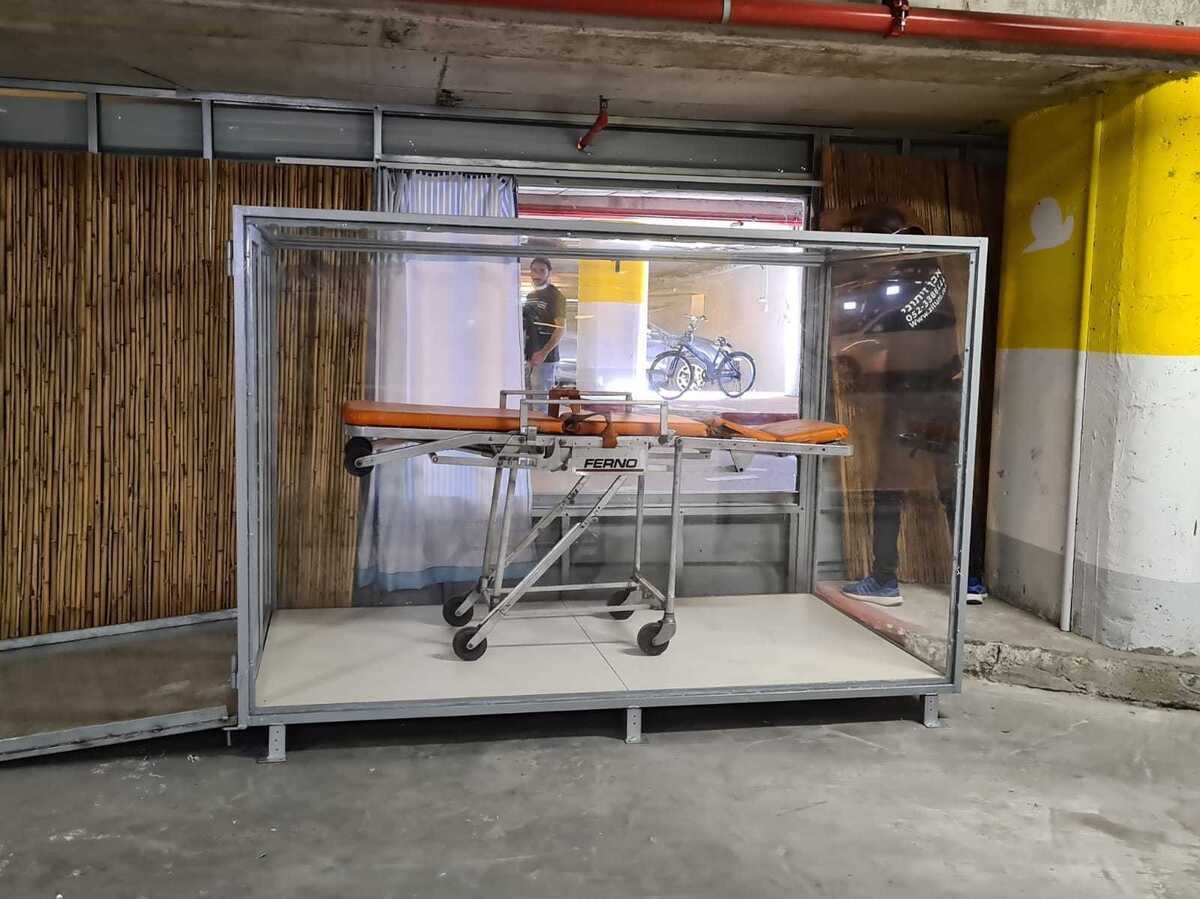 Some Israeli hospitals, like the Sheba Medical Center, place the body of a person who died of coronavirus in a glass booth. That way, families who weren’t able to be with a dying relative can say a last goodbye.

Some Israeli hospitals have offered alternatives to families blocked from coronavirus wards to bid goodbye to a dying loved one. Sheba Medical Center built a glass booth in which to place the body so families may get a last glimpse. Families stand on the other side of a wall and peer through a window to see the deceased.

Burial officials restrict funerals to 20 guests and forbid the custom of passing around a shovel for attendees to scoop dirt into the grave so participants don’t touch the same shovel. At some funerals, participants insist on keeping the tradition to honor the dead by scooping up dirt with their bare hands. Coronavirus victims’ bodies are wrapped in two plastic body bags to protect those who handle the body, since coffins are not typically used in Jewish burials in Israel and bodies are lowered directly into the grave, wrapped in shrouds.

Israelis may no longer host guests for the shiva, the weeklong mourning gathering for family, friends and well-wishers. The bereaved must grieve at home alone. Some host shiva gatherings by video conference, but many Orthodox Jews must give up reciting the special mourner’s prayer, the kaddish, because it requires the physical presence of a quorum of ten. More liberal rabbis have permitted a virtual quorum to gather through video conference for the mourner’s prayer.

Some coronavirus victims in parts of Europe have been flown to Israel for burial, following a Jewish custom to be buried in the Holy Land. But not U.S. Jews, an Israeli burial official told NPR. United Airlines, servicing the only remaining direct U.S.-Israel flights, has suspended international funeral shipments, a service airlines provide to transfer the deceased to their desired final resting place. A leading Orthodox rabbi in New York has permitted temporary burial in the U.S. until casket shipments are renewed and the bodies can be exhumed and reburied in the Holy Land.

In the city of Wuhan, the epicenter of the virus in China, families under lockdown hadn’t been able to pick up the cremated ashes of their loved ones for the last two months, until about late March in the run up to Tomb Sweeping holiday. That traditional Chinese festival, which pays respect to ancestors, was observed this year on April 4.

To prevent large crowds from forming, authorities in Wuhan require families to reserve a time slot to pick up their loved ones’ ashes and bury them, while accompanied by a neighborhood official.

Philippines: Cremation within 12 hours, with some exceptions 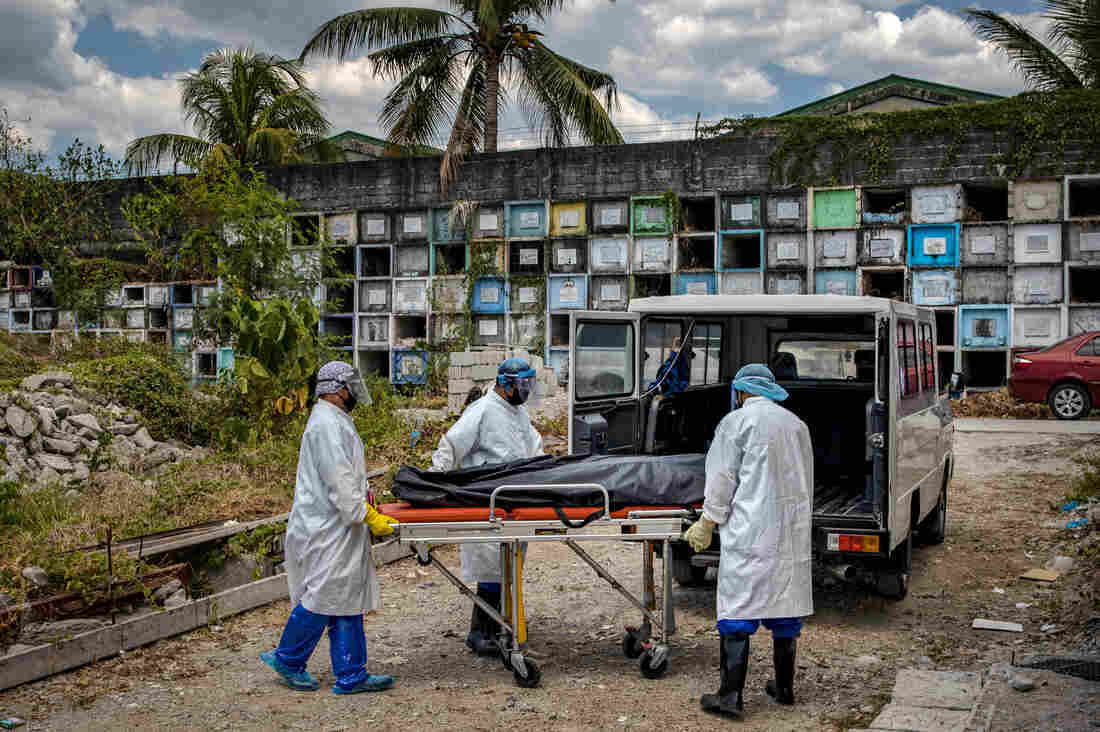 On April 3, funeral workers in protective suits unloaded the body of a person presumed to have died of the coronavirus, to be cremated at a public cemetery in Manila.

In the Philippines, a government edict has decreed that the remains of a COVID-19 victim should be cremated within 12 hours, with an exception if a religion forbids cremation. If the deceased is a Muslim, for example, the body of the deceased should be placed in a sealed bag and buried in the nearest Muslim cemetery according to Muslim rites, also within 12 hours.

The speedy burials are a disrupting departure from traditional Christian burials in the Philippines, a predominantly Catholic country where the “lamay” or wake can last three to seven days.

When It Pertains to Vaccines And Autism, Why Is It Difficult To Refute False...