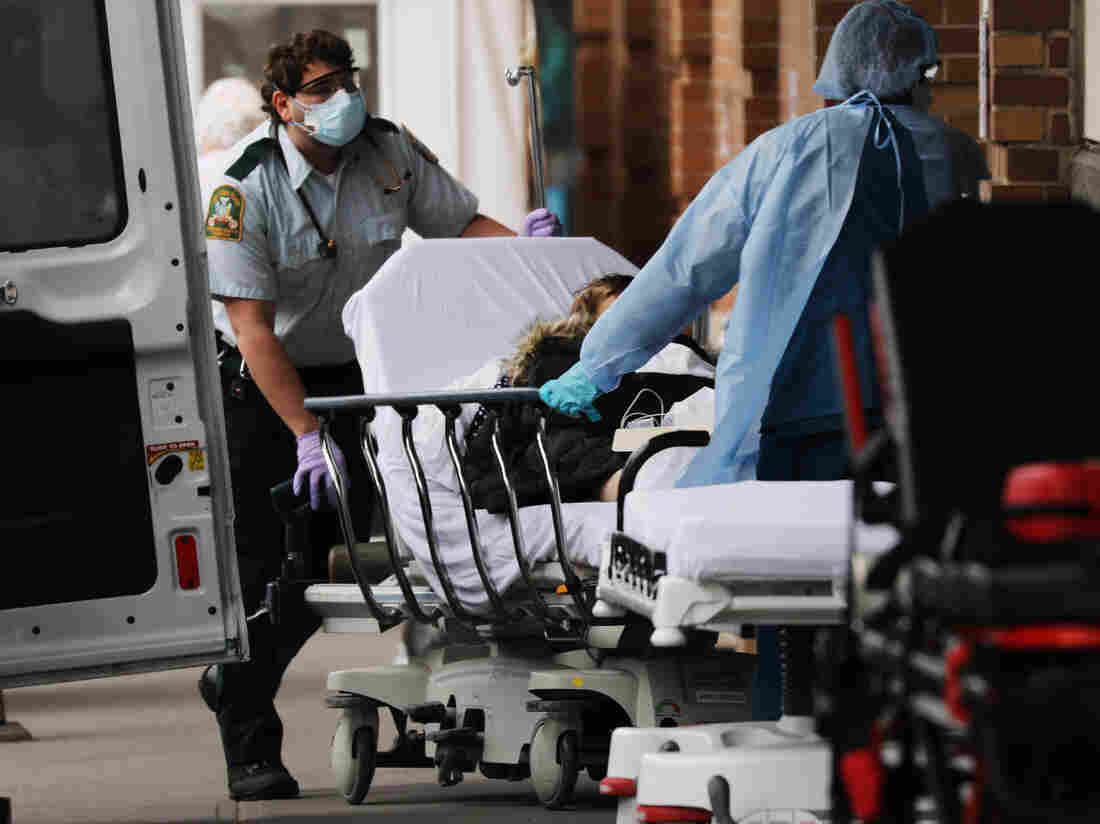 A patient with suspected COVID-19 arrives at Maimonides Medical Center in Brooklyn Thursday. Even as the risk of big medical bills climbs, many Americans are losing their jobs and health insurance right now. 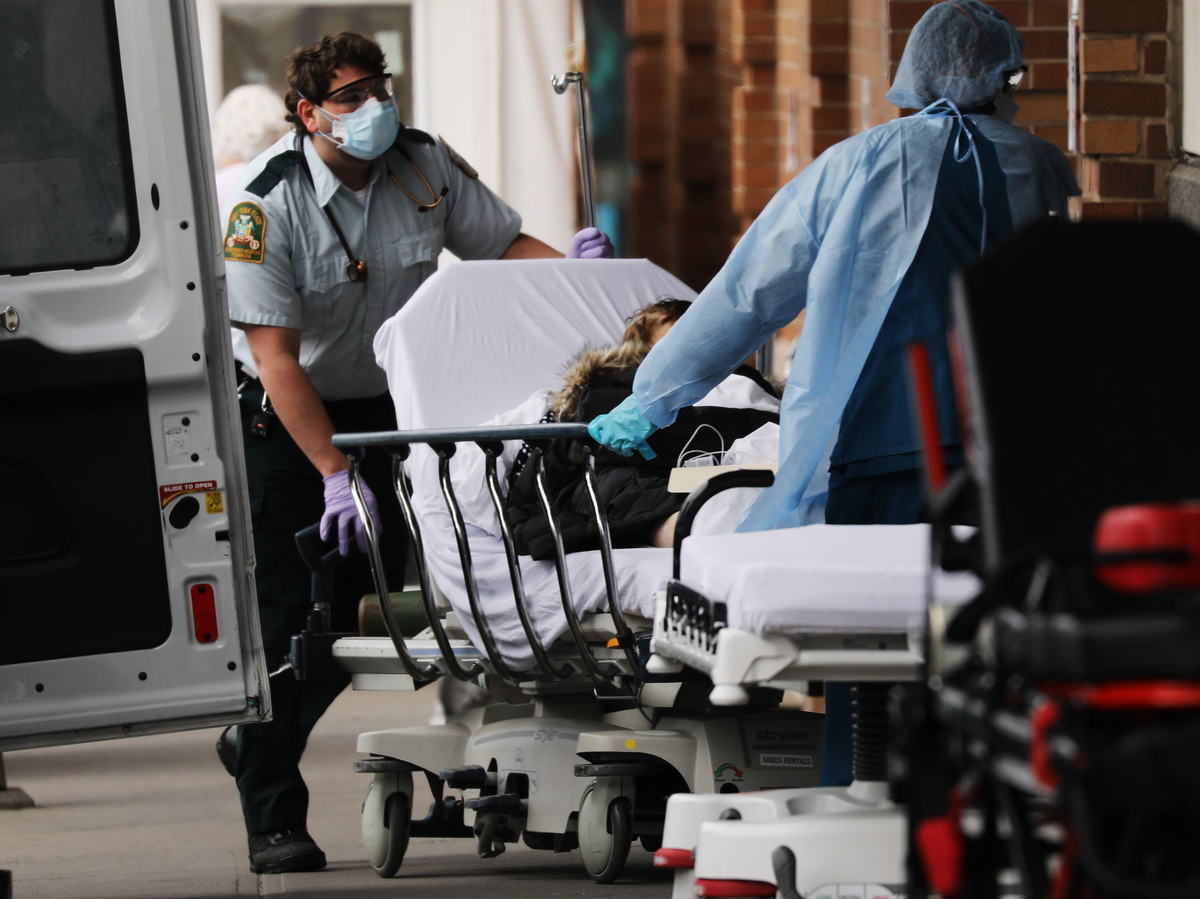 A patient with suspected COVID-19 arrives at Maimonides Medical Center in Brooklyn Thursday. Even as the risk of big medical bills climbs, many Americans are losing their jobs and health insurance right now.

In normal times, when you choose your health insurance plan — usually during a fall “open enrollment period” — you try to guess at what the next year and your health will be like. You look at your budget and compare monthly premium costs and deductibles. If you take certain medications and have favorite providers, you try to make sure they’re covered within the health plan you choose.

Now, all of that planning for 2020 is pretty much out the window. Many of us — especially those who are older than 65 or have underlying health conditions — are facing the possibility of getting sick with COVID-19 in the coming months, and we’ll have to deal with the bills afterward.

Millions of people have lost jobs — and often the health coverage that came with those jobs. More still have had their work hours reduced or have received drastic pay cuts, so monthly premiums that may have been manageable before are now out of reach.

Here are some of the scenarios Americans are facing, and tips for navigating the storm of insurance worries:

I got laid off and had insurance through my job

You might be able to keep the same health plan under federal rules known as COBRA — if you worked for an employer with 20 employees or more. Larry Levitt, executive vice president for health policy at the Kaiser Family Foundation says one advantage of COBRA is “it provides the most continuity of coverage, because you stay in exactly the same plan you were in when you were employed — same network of doctors and hospitals, same deductible — everything is identical.” But this continuation of your current health coverage can be quite expensive because, at least under normal circumstances, you’d have to pay the full monthly premium, without your employer chipping in to make it more affordable. Your insurer is required to notify you if you have the COBRA option, and you have 60 days to elect to do so.

The next place to look is the insurance exchanges set up under the Affordable Care Act. Losing health insurance that you got through your job is considered a “qualifying event” to enroll in a plan on all the health insurance exchanges. That means you can go to Healthcare.gov or your state-run exchange and shop for a new plan. The Kaiser Family Foundation has a handy subsidy calculator so you can see what you might pay in premiums for these plans — remember that your unemployment benefits count as income.

If your income has been wiped out with the lost job, you should also check to see if you qualify for Medicaid, the national health insurance program for low-income people that’s jointly funded by federal and state governments. Medicaid enrollment takes place year-round, and is based on monthly income, not annual income.

I don’t have health insurance

Your options to get covered if you’re one of roughly 27 million Americans who were uninsured even before the COVID-19 crisis depend on where you live. Medicaid may work for you, but the rules for eligibility (including the income cut-off) vary by state. States that have not expanded Medicaid — which is how Obamacare broadened coverage to 12 million previously uninsured people — have more restrictive rules about who qualifies. According to KFF, nearly 6 million adults right now qualify for Medicaid but aren’t enrolled.

If you don’t qualify for Medicaid, next look to the state insurance exchanges that were set up under the ACA. The Trump administration White House has confirmed to NPR that it has decided not to open a special enrollment period for Healthcare.gov, the federal insurance exchange. But some states run their own insurance marketplaces, and have created a special enrollment period during the coronavirus crisis. In these states — including hard hit places like California, Washington, and New York — that means you don’t need to have a “qualifying event” like job-based coverage loss or the birth of a child to newly enroll right now in an Obamacare plan..

It’s worth checking to see if you can enroll and get an affordable plan — according to KFF, more than 4 million people who are uninsured would qualify for a subsidized ACA health plan that would cost them nothing in monthly insurance premiums.

One thing to note is that Congress has tried to help hospitals and health systems pay for care for the uninsured during the coronavirus crisis. “While people who are uninsured might still receive bills from providers, the stimulus bill will help reduce the burden on patients because the hospitals will be compensated at least partially for their costs,” says Sabrina Corlette, co-director of the Center on Health Insurance Reforms at Georgetown University.

It’s not yet clear how the $100 billion allocated for the health system will be used, but White House officials have pointed to this funding as a reason why a federal special enrollment period may not be necessary. Uninsured patients’ bills related to COVID-19 might be forgiven by doctors and hospitals, the White House suggests. Many details about how that federal funding will be dispersed are still up in the air.

My kids have lost their coverage, too

There will be many people — more than 2 million — who don’t have access to insurance they can afford, even with the options mentioned above. If you can’t get a health plan for the adults in your family, your children might still be able to get coverage — the rules are different for them, and for pregnant women as well. InsureKidsNow.gov is a good place to start to determine if your children may be eligible.

What about short-term or “skinny” plans?

Short-term health insurance plans were originally designed to be used for just several months — to tide people over between the end of schooling and the start of a new job, for instance. Since then, the Trump administration has promoted these plans, and their more affordable monthly premiums, as good long-term alternatives, too.

But the plans often have more limitations in what they cover than ACA plans do. They’re allowed to restrict enrollment to those without preexisting conditions, for example, and don’t have to cover all “essential benefits” included in all Obamacare plans. “They might exclude prescription drugs; they might cap how much they’ll pay in a hospital,” says Levitt. “So if you look at one of these short-term plans, you really want to read the fine print carefully.”

Once I’m insured, what’s covered in the time of coronavirus?

Congress has required that the cost of coronavirus testing be covered by insurers (though testing is still not widely available). What’s less clear is how much your treatment will cost you if you get seriously ill and need to be hospitalized for COVID-19.

Hospital and emergency care are considered essential benefits and must be covered, but patients may still have to meet the annual deductible of their policy and pay things like copays and coinsurance on top of that. So far, three large commercial insurers — Aetna, Cigna and Humana — have pledged to waive these patient costs for COVID-19 treatment, and several nonprofit community health plans — including Fallon Health and Harvard Pilgrim Health Care — have as well. The lack of diagnostic testing may make it tricky to prove you qualify for these benefits, Levitt points out.

Unfortunately, surprise bills are still a concern — those are bills that come directly from out-of-network hospitals or doctors who provide your care. Nearly 1 in 5 inpatient admissions for pneumonia results in a surprise bill, according to a KFF analysis. It’s possible members of Congress will try to address this in future coronavirus legislation, but until they do, this will remain a way that people could be exposed to high medical bills.

If you do get a surprise bill from COVID-19 treatment, the same advice applies as always (this will be familiar to those who follow NPR’s Bill of the Month series): Call your hospital or doctor and/or insurance company, and try to negotiate a lower bill. If they won’t budge, check with the doctor or hospital to see if they can help you with a payment plan, or forgive the debt, as a part of a charity care program.

How Long Does Immunity To SARS-CoV-2 Last?

Slay the Spire, the decade’s best deckbuilding game, coming to iOS in June

Viewpoint: Why The Swimming Pool Survey Need To Provide United States Time Out

Disrupting death: Could we really live forever in digital form?