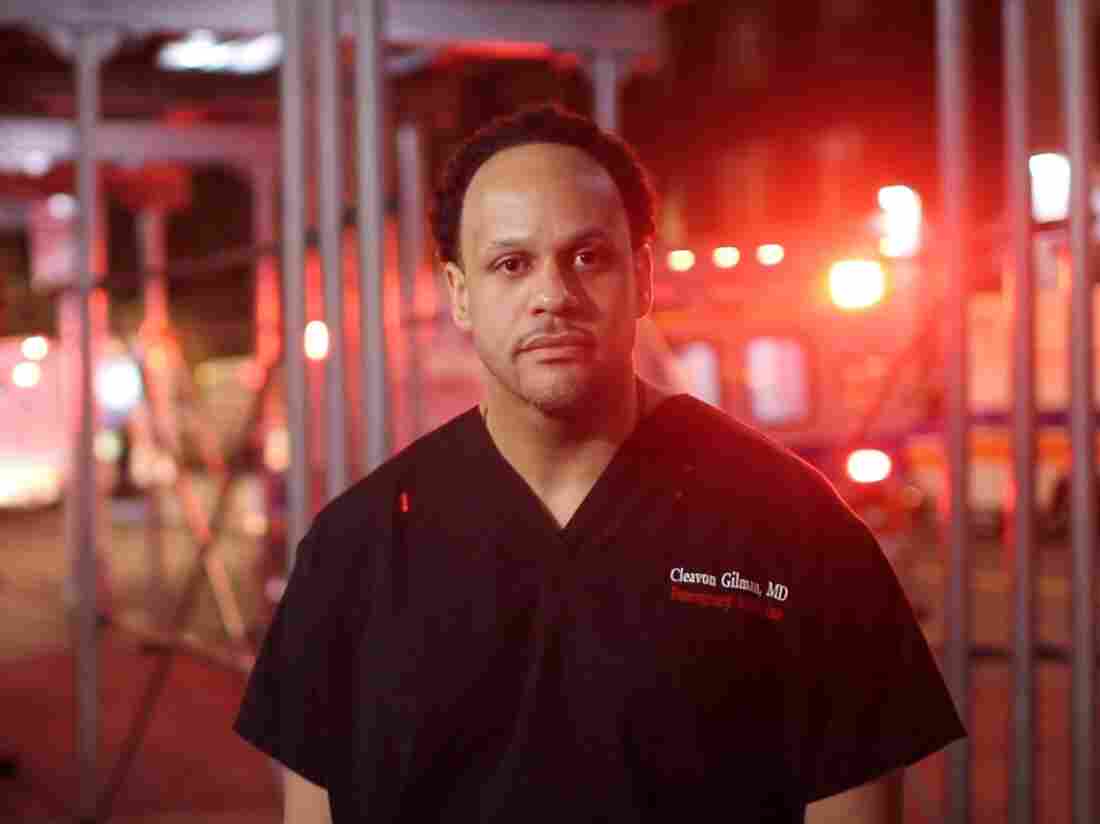 Cleavon Gilman, an emergency room physician and former combat medic, says he has had three colleagues die from the coronavirus. “You can actually die at your job now, and that’s never really been an issue before,” he says. 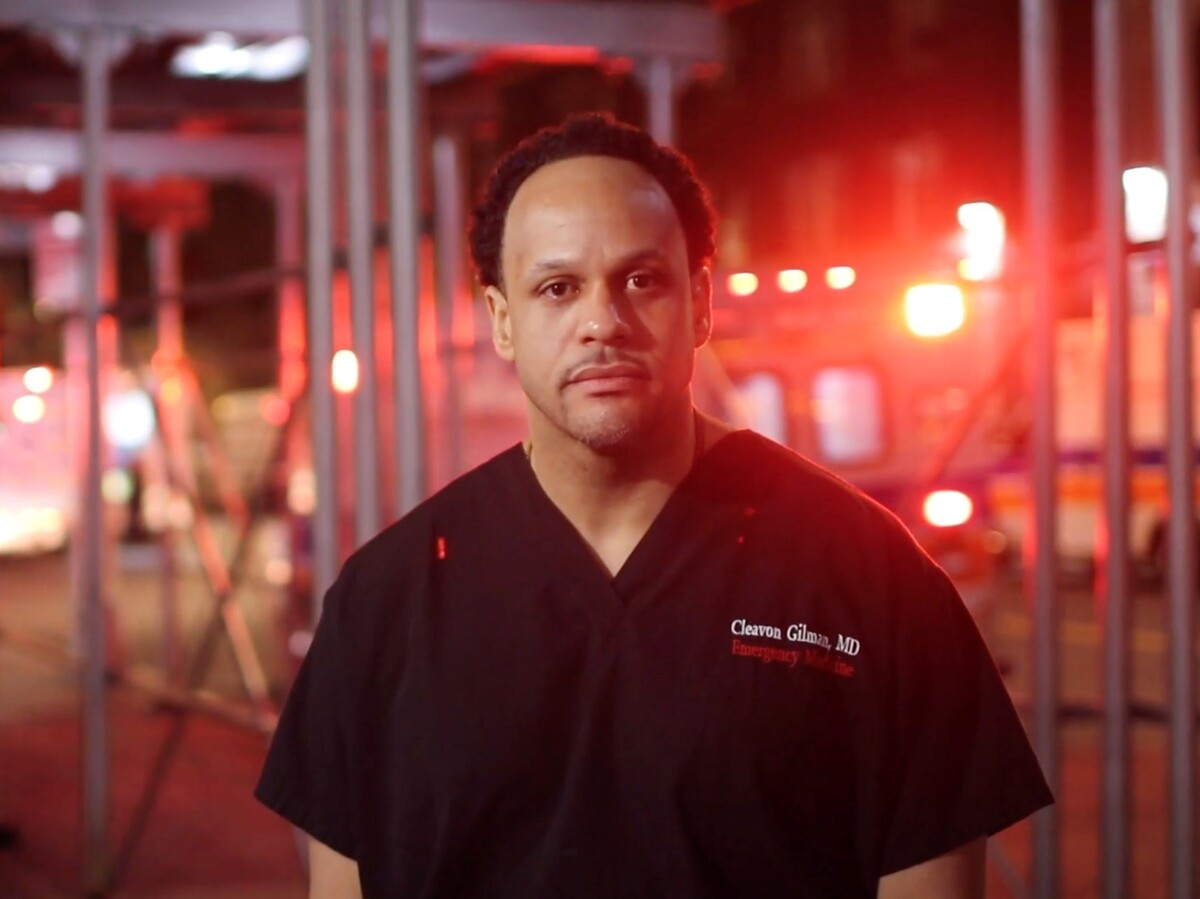 Cleavon Gilman, an emergency room physician and former combat medic, says he has had three colleagues die from the coronavirus. “You can actually die at your job now, and that’s never really been an issue before,” he says.

Emergency room physician Cleavon Gilman compares working in a hospital amid the pandemic to war.

“You can actually die at your job now, and that’s never really been an issue before,” he says.

He has the experience to make the comparison: Gilman served as a combat medic in the Iraq War.

“Health care providers are walking into a war zone every day where we can be killed by this virus, and even serve as a Trojan horse to bring it home to our family and to kill our loved ones,” Gilman tells Rachel Martin on Morning Edition. “The amount of emotional strain our health care providers are under right now is just unimaginable.”

The pandemic has created multiple crises for health care workers.

Hospitals are stretched thin — in beds, but more so in staffing. In Yuma, Ariz., where Gilman works, about half of the county’s hospital beds are occupied by COVID-19 patients. That level is a “nightmare” scenario for staff, as one health researcher recently described it.

Then health workers have to worry about getting sick with COVID-19 themselves. More than 1,400 health care workers have already died, according to one count by The Guardian and Kaiser Health News.

And there’s also mental health strain. Researchers expect many of those working now to be at enhanced risk of developing post-traumatic stress disorder. Physicians are already at higher-than-average risk of suicide, with one analysis putting the number at about 300 to 400 dying by suicide per year in the U.S., or about one per day.

Gilman has spent months writing about the virus and the strains it has caused for frontline workers, but he gained widespread attention last month after tweeting that there were no longer enough ICU beds at Yuma Regional Medical Center.

Gilman says he was let go because of the tweet, but the hospital later called it “a misunderstanding.” On Monday, he was back at work, or “back on the battlefield,” as he tells NPR in an interview about the challenges that he and other health care providers have been dealing with throughout the crisis. Here are excerpts.

How have you been doing?

This pandemic has been very personal. I’ve had three colleagues who have died from this. Two nurses, as well as my mentor, Lorna Breen, who got COVID in New York, and she took her own life. I think that this has just been extremely hard. I’ve also lost a cousin as well who was 27 years old, Simon Press. One thing I’ve kind of taken for granted is the toll that this has also taken on my family as well. We’ve been isolated, quarantining for 10 months. And this has really been very hard on my fiancée, who I’ve taken from New York and I’ve brought to a small community here.

Can you talk a little bit about the stigma of mental health and what it means for health professionals?

There’s this false image that we are supposed to be perfect and that things can’t really affect us.

I think even prior to this, I believe that one physician that committed suicide per day and that was twice the national average. It’s a very hard job to be an E.R. doctor. You know, at baseline, we work under a lot of stress. Lives are in our hands. And we have to make split second decisions that will affect an outcome of a person.

One of the problems is if we say something about that, when you actually apply for a job, there’s actually a questionnaire that you have to put psychiatric history on. So people are reluctant to have that follow them throughout their medical career.

When I was a resident in New York, three doctors committed suicide — actually four — over my four years there. And so this is a very prevalent problem and it needs to be addressed. One of the things that’s occurring now is this Lorna Breen Act … to create more mental health programs and well-being programs.

What was it like to watch the first health care workers get vaccinated this week?

It’s really amazing because we’ve been waiting for this so long. And it’s really important to get health care workers vaccinated because we are a limited resource. I’m really excited to get vaccinated here, it’s supposed to happen on December 20th. …

I’ve been doing this since March, for 10 months. God bless that I have not been sick. I’ve been very lucky.

The audio for this story was produced and edited by Nina Kravinsky and Kelley Dickens.

How to Celebrate Pride Month as a Family

How to Get a Bedtime Message From Star Wars, Marvel, and Disney Characters