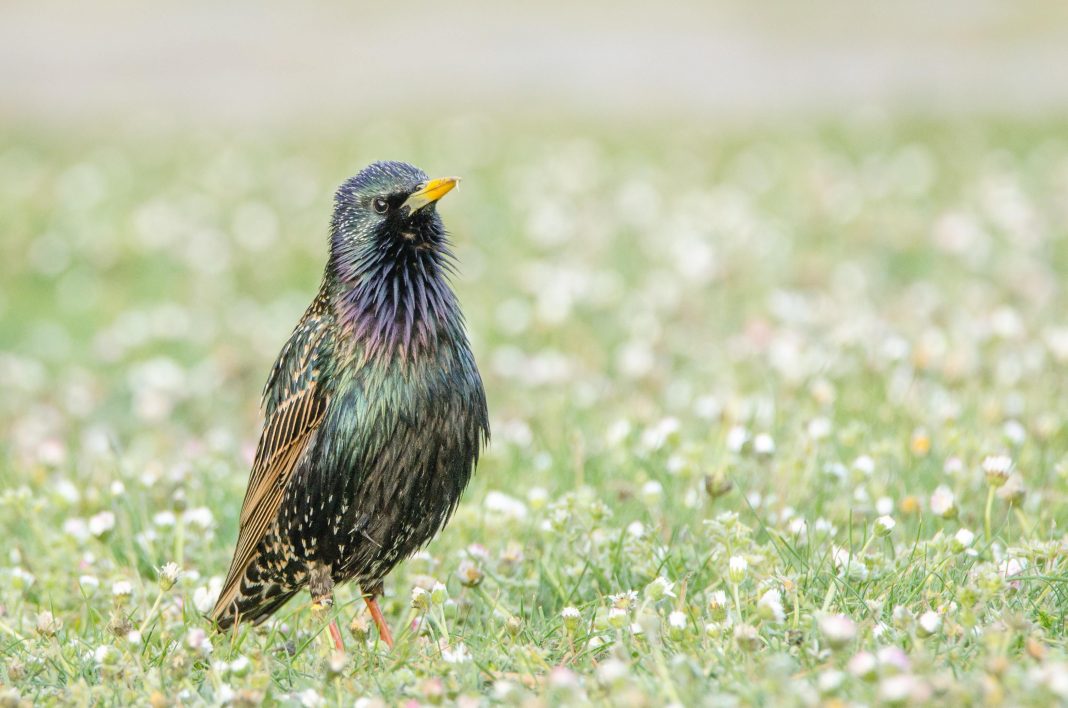 European starlings are not native to North America, as their common name suggests. They arrived in North America after a small group was imported in 1890 and again in 1891 by a wealthy and misguided New York drug manufacturer, Eugene Schieffelin, who released them into New York City’s Central Park. This simple, inexplicable act of environmental vandalism unleashed a tsunami of the glossy purple-black songbirds that swept across the continent. Along the way, their numbers increased from just 100 individuals to more than an estimated 200 million by 1970.

How did these smallish European songbirds successfully expand their geographic range to invade so many different habitat types all across North America? How did these birds expand their population numbers into the hundreds of millions from a tiny founder population of just 100 individuals in such a short time?

These are two of the many important questions that European starlings have inspired over the decades amongst those who study, conserve and observe these birds.

To investigate these questions, a team of scientists, led by Natalie Hofmeister, a PhD Candidate in Ecology and Evolutionary Biology at the Cornell Lab of Ornithology, and her collaborators set out to examine the birds’ genomes to better understand how genetics may play a role in their extreme adaptability.

Starlings in North America Show Local Adaptations In Their Genomes

Employees of the U.S. Department of Agriculture (USDA) Wildlife Services collected 166 adult male European starlings between January and March 2016 and again in 2017 from 26 dairies and feedlots across the United States (Figure 1).

Ms Hofmeister and her collaborators obtained DNA from muscle samples and analyzed the sequence data to identify whether their study starlings showed any population structure (Figure 2). Population structure is a situation where particular variants of a given gene occur in more often birds living in some places than in others, usually because they (and their genes) are separated by either geographic features, such as mountains, or by vast distances. Populations where individuals often disperse across large distances are revealed by the overall genetic sameness in their DNA.

So Ms Hofmeister and her collaborators didn’t identify any obvious differences in genes or their geographic distributions, but closer analysis did reveal some very tiny genetic differences in the starlings’ DNA. These so-called ‘genomic signatures’ were associated with regions in the starlings’ genomes that control how they adapt to local variations in temperature or precipitation. Based on these findings, Ms Hofmeister and her collaborators proposed that invasive starlings’ genetics reveal that they are adapting extremely rapidly to either scant precipitation or low temperatures in North American habitats, conditions that the birds’ ancestors never encountered in Europe.

“The amazing thing about the evolutionary changes among starling populations since they were introduced in North America is that the changes happened in a span of just 130 years in parallel with a huge expansion in the bird’s range and population size,” Ms Hofmeister said in a statement.

This raises the question: where did the birds’ genetic adaptations to the local environmental conditions originate? Did the founding population already possess these genetic variants, even if they weren’t adaptive in Europe?

“A genetic variation that might not have been useful in one environment could turn out to be very beneficial in another,” Ms Hofmeister pointed out. “So, a variation related to temperature and rainfall that enhanced survival became more common in a new environment.”

The answer to this question may lie in the source of these adaptations. Unlike genetic mutations, molecular changes in gene expression and activity (known as epigenetic shifts) can occur extremely quickly (more here & ref). Epigenetics are heritable changes in observable characteristics, or phenotype — such as the ability to thrive in arid environments — that do not stem from alterations in the sequence of the building blocks, or nucleotides, that DNA is made from.

“What I think is really cool is that the starlings in North America appear to have adapted to different conditions across the range,” Ms Hofmeister said. “So, it wasn’t just that they reproduced really quickly, and then just kept reproducing. It’s that they specialized once they arrived in new areas.”

Other invasive species, such as house sparrows, Passer domesticus, that have been introduced into new environments around the world are quite similar to European starlings. Previous studies of house sparrows have suggested that epigenetic shifts are the basis for their invasiveness in Africa (ref) — although curiously, not necessarily in Australia (more here & ref).

Despite this, it is important to consider that epigenetics may be the true engine of rapid adaptation for many species, especially those that are invasive.

“For a long time we didn’t think that [such big adaptive change] was possible, that it took millions of years for genetic mutations to change a genome.”

True, but epigenetic shifts do not change genes themselves; they change the where and the when of genes that already exist.

But even epigenetics are not a panacea for rapid adaptation. For example, in spite of their impressive beginning, European starlings have now declined by 63% in urban and suburban areas across North America. They also are in steep decline in Europe, as are house sparrows. Considering all the many and varied damages that people are inflicting on the planet, such as climate change, habitat destruction, widespread pesticide abuse and pollution with a host of other environmental toxins, I think the billion-dollar question becomes: have we pushed the global system beyond even the powerful adaptive reach of epigenetics? Have we destroyed so much of the planet that no living thing, not even humans, will be able to cope in the near future?

What Yuri Gagarin Saw From Orbit Changed Him Forever

SpaceX loses its third Starship prototype during a cryogenic test

Wednesday’s Google Doodle Gives A Nod To The Wackeldackel