Science and Tech News
Home started He Started Vaping THC To Cope With Chronic Pain. Then He Got... 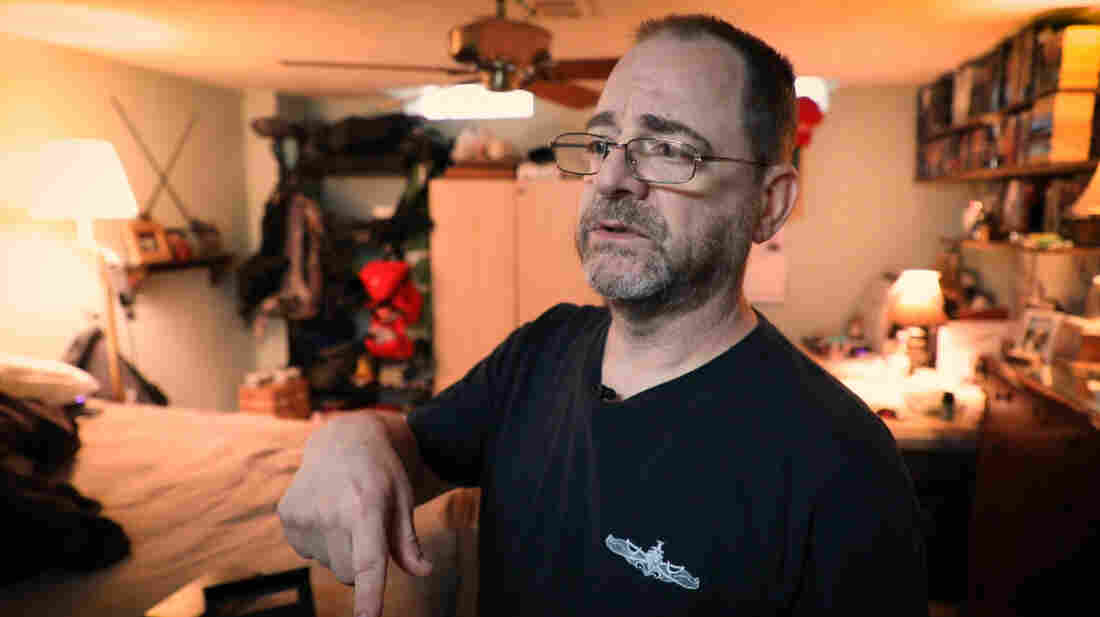 Paul Lubell used to vape medical marijuana to manage his chronic back and neck pain, instead of using opioid medications. Now, after getting hospitalized for lung sickness, he doesn’t vape. 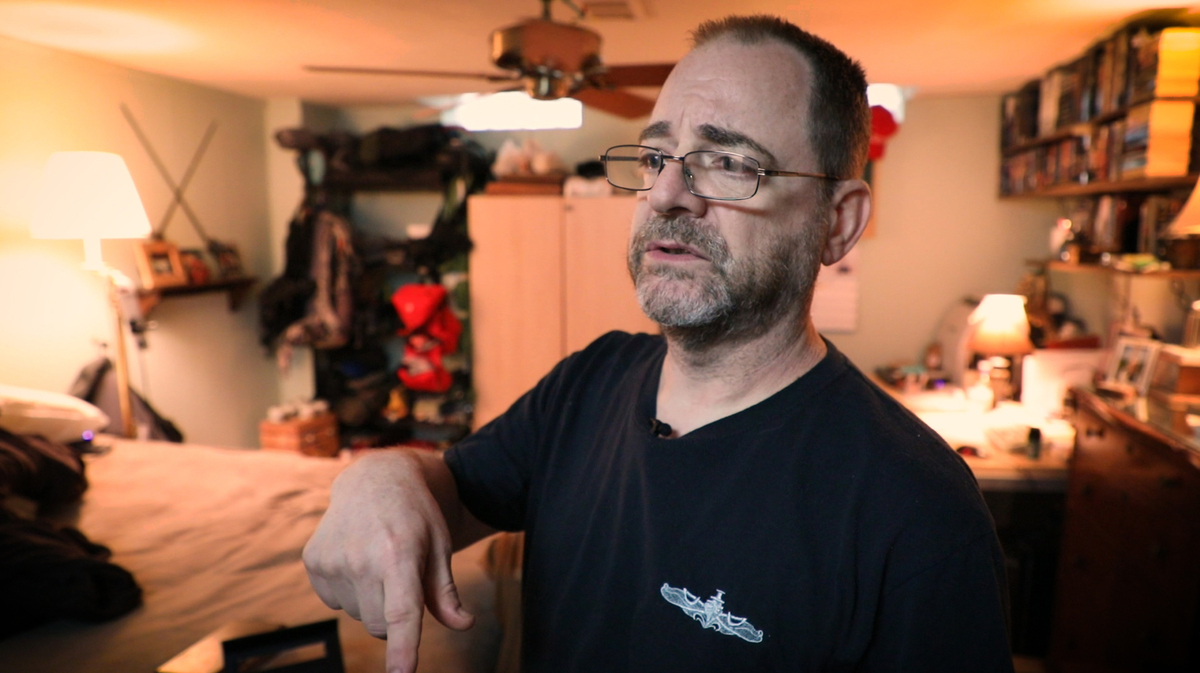 Paul Lubell used to vape medical marijuana to manage his chronic back and neck pain, instead of using opioid medications. Now, after getting hospitalized for lung sickness, he doesn’t vape.

As vaping has grown more popular in recent years, the trend has been fueled by the habit’s pleasurable allure: Compared with smoking cigarettes or pot, vaping is discrete and less smelly. Vaping fluids come in hundreds of flavors. There’s no tar or other byproducts of burning. And vape pens are high-tech, customizable and sleek.

But none of that mattered to Paul Lubell when he decided to try vaping. He wasn’t thinking about pleasure; he was just trying to avoid pain. The retired Navy veteran turned to vaping marijuana, hoping it would help him cope with his chronic, debilitating musculoskeletal pain.

Unfortunately, it wasn’t long before he became part of the national statistics tracking an outbreak of vaping-related lung illness that has killed four dozen Americans and sickened more than 2,200. Lubell ended up in the hospital, seriously ill from vaping an oily liquid containing extracts of THC, the psychoactive ingredient in marijuana.

Lubell, who lives in the Cleveland suburb of Beachwood, is older than most of those who have contracted what is now being called “e-cigarette or vaping associated lung injury,” or EVALI.

Three-quarters of patients with the condition have been under age 35; Lubell is 59.

But like patients in the majority of those cases, he used THC. And the latest information from the Centers for Disease Control and Prevention suggests that it’s some added ingredient in THC vapes — likely vitamin E acetate — that is causing the lung disease. The CDC is warning people to stop vaping altogether, given the risk of lung illness, which puts people who vape to manage pain in a tough position.

“My pain would be gone”

Lubell suffers from pain in his back, neck and knees. He is not sure when his problems started, but he wonders if they are related to his days on a Navy helicopter rescue team.

“It was fun. I was indestructible and good at what I did. Everybody wanted me,” he recalls, while looking at photos of his much younger self posing on top of one of the helicopters. 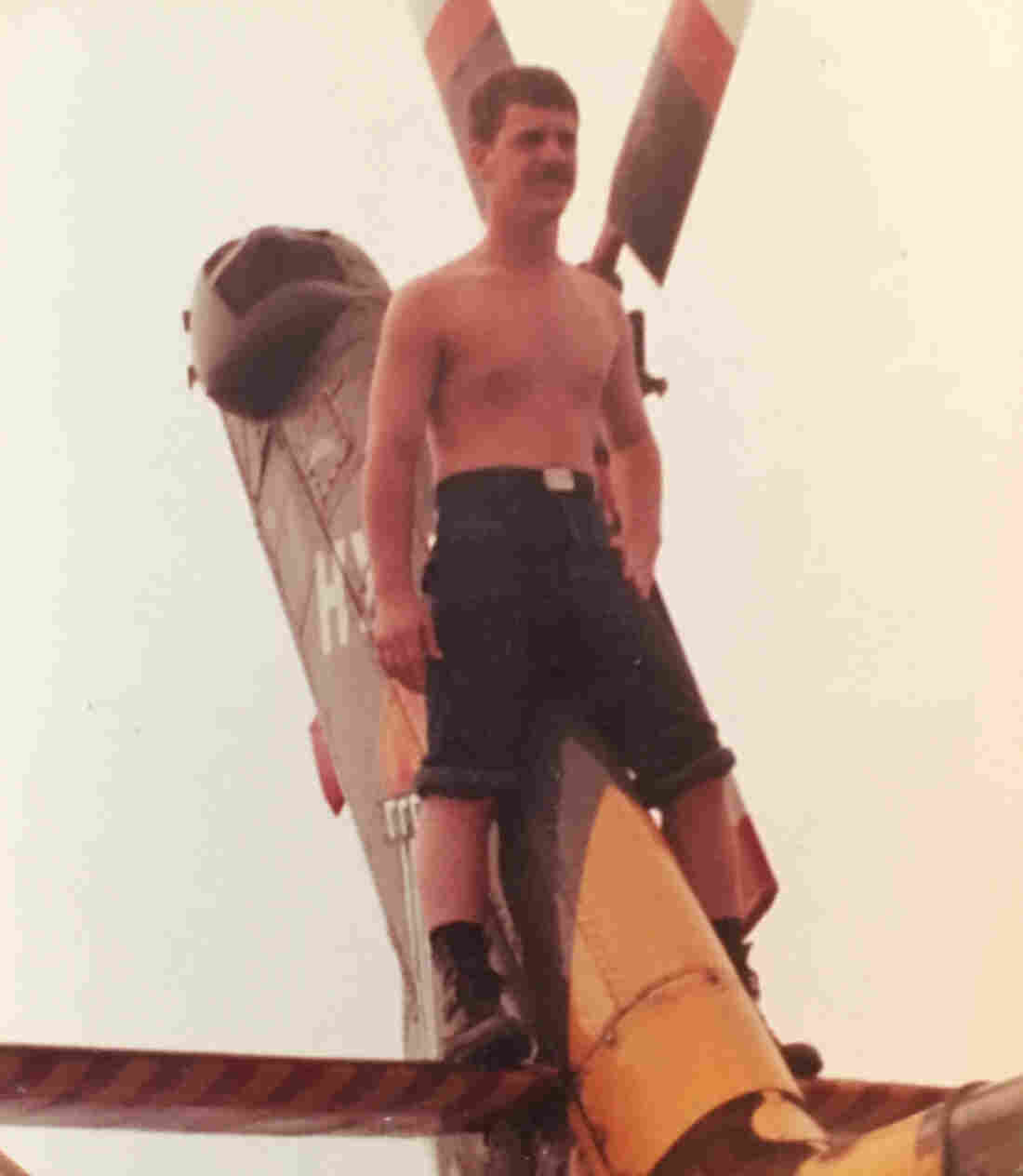 Lubell during his time in the Navy in the late 1970s. 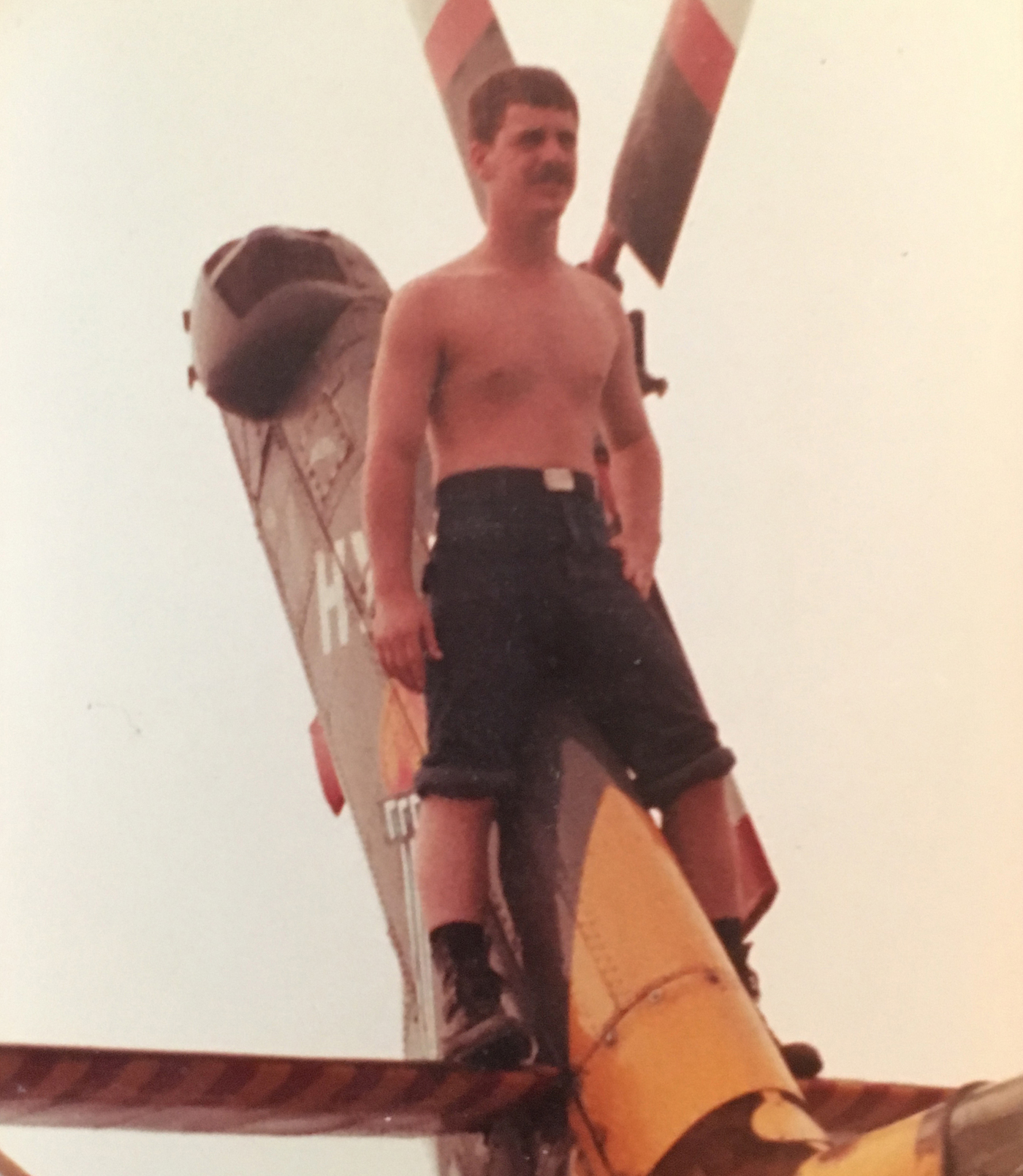 Lubell during his time in the Navy in the late 1970s.

Lubell sometimes jumped out of the helicopter and smacked into the water during training and rescue missions. That could have been the genesis of some of his back pain, he says.

Lubell has had two back surgeries, and he also suffers from serious neck pain.

Every day is a struggle, he says.

Looking for relief, he has tried many medications, including opioids such as hydrocodone, but that drug is no longer an option. Lubell is a patient at Louis Stokes Cleveland VA Medical Center, and in the wake of the national opioid addiction epidemic, the VA has revised its pain-treatment protocols.

“The VA is not a friend of opioids at all,” Lubell says. “Unless you’re coming out of the hospital for surgery or something like that. They do not give vets opioids.”

“It leaves someone who is in chronic pain in a very tough situation, having to decide how to deal with it,” he adds.

Lubell started using an electronic cigarette device paired with prefilled THC cartridges. Medical marijuana is legal in Ohio, as it is in 33 other states, plus the District of Columbia. When Lubell vaped, the pain went away quickly, he says.

“When I say it took away pain — it was almost instantaneous,” he says. “Within the span of 10 minutes, my pain would be gone.”

Lubell knows that it was not a cure for the underlying problem. “[The pain] may have been masked, but it made me capable of doing my daily activities,” he says.

Lubell describes his old vaping cartridges as tiny sticks that screwed on top of the vaping pen. When he inhaled at one end of the pen, it pulled the THC extract and other liquids in the cartridge over a heating element.

When he let go of the pen and exhaled, he could see a cloud in the air, but that was different from when he had smoked marijuana, Lubell says.

Hospitalized with cough and fever

Lubell purchased the THC cartridges from a friend at what he described as a below-market price. A few months later, in July, Lubell started running a very high fever and went to the Cleveland VA Medical Center.

“He had this cough that was persistent. He just looked very, very sick,” recalls Dr. Amy Hise, who was on the team of physicians that treated Lubell.

“He was put on very strong broad-spectrum antibiotics, and yet he continued to have fevers. He continued to feel unwell. He had very flu-like symptoms,” Hise says. 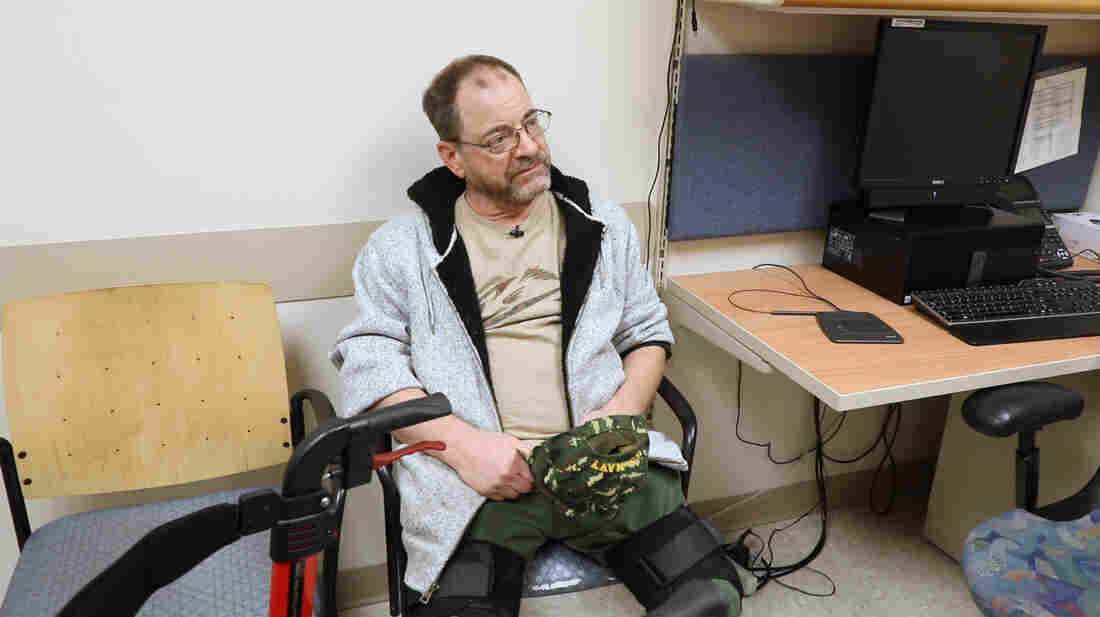 Lubell waits for his doctor in an examination room at the Louis Stokes Cleveland VA Medical Center. 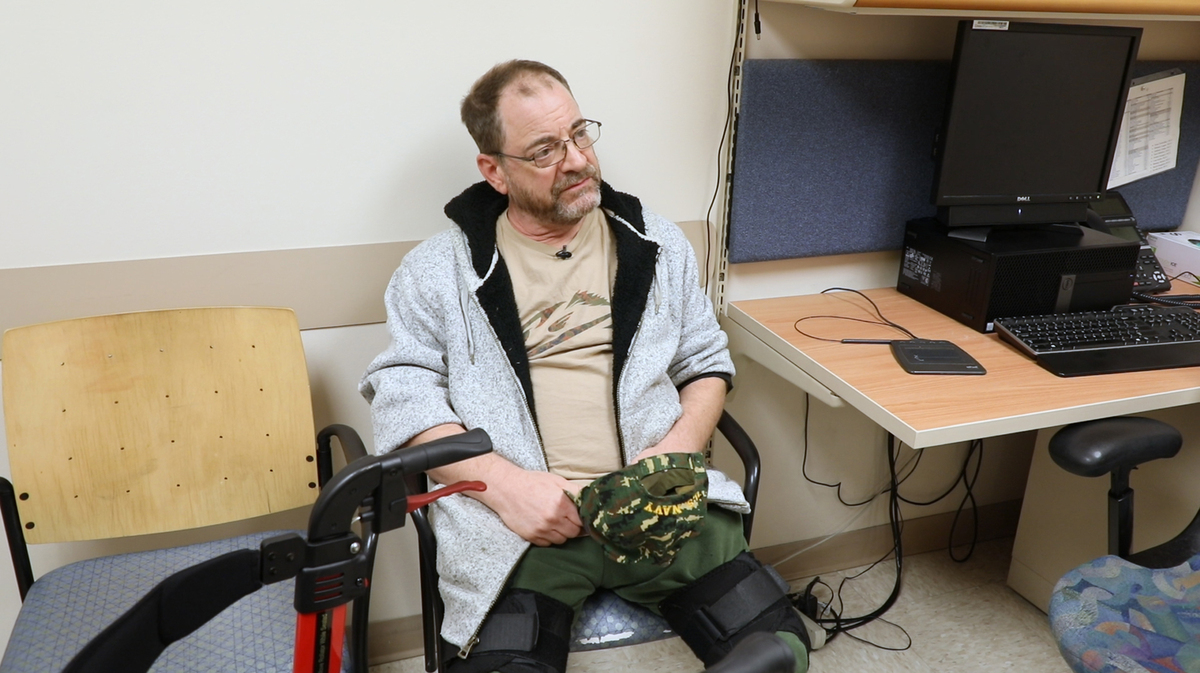 Lubell waits for his doctor in an examination room at the Louis Stokes Cleveland VA Medical Center.

After a few days, Lubell seemed to improve and was released, according to Hise. But then, he grew ill again.

Hise says she was surprised when he came back to the emergency department in late August.

By then, however, she had seen a new alert from the CDC about the vaping illness. Lubell had also seen reports in the media about health problems related to vaping.

“He was forthright that he had been vaping, and indeed what had happened is when he was in the hospital before, he’d stopped vaping,” Hise says. “He stopped for a period of time until he started to feel better. And then he started it up again, and that’s when his lung disease came back.”

The doctors at the VA switched tactics, taking Lubell off antibiotics and starting him on steroids, based on information provided by the CDC. Lubell was soon released and on the road to recovery.

Even though vaping eased his pain, those two bouts of respiratory sickness were too much. Lubell says he won’t vape again.

Hise agrees with that decision.

“I think there’s just too much that’s not known about what’s in these products to safely use them,” she says.

But Lubell is not alone in having turned to marijuana for pain management. Dr. Melinda Lawrence, a pain management specialist at University Hospitals, says many patients have told her that they are trying marijuana to see if it will help.

“That is probably something that I get from patients every day,” Lawrence says. “And it’s not just people who are young, in their 20s. [There are] people in their 80s who are telling me they are looking to try anything to help with their pain.”

Even though some patients say marijuana helps their pain, there is not enough research to prove that it’s broadly and reliably effective, Lawrence says.

“Personally, I don’t recommend it for my patients. But maybe after we have more studies, it can be something in the future” she adds.

Lubell, who has an Ohio medical marijuana card, is still planning to use marijuana — but he won’t vape it. He turned over his equipment and leftover THC cartridges to health officials for analysis.

This story comes from NPR’s partnership with Cleveland’s ideastream and Kaiser Health News.

What to anticipate at Google’s Pixel hardware occasion