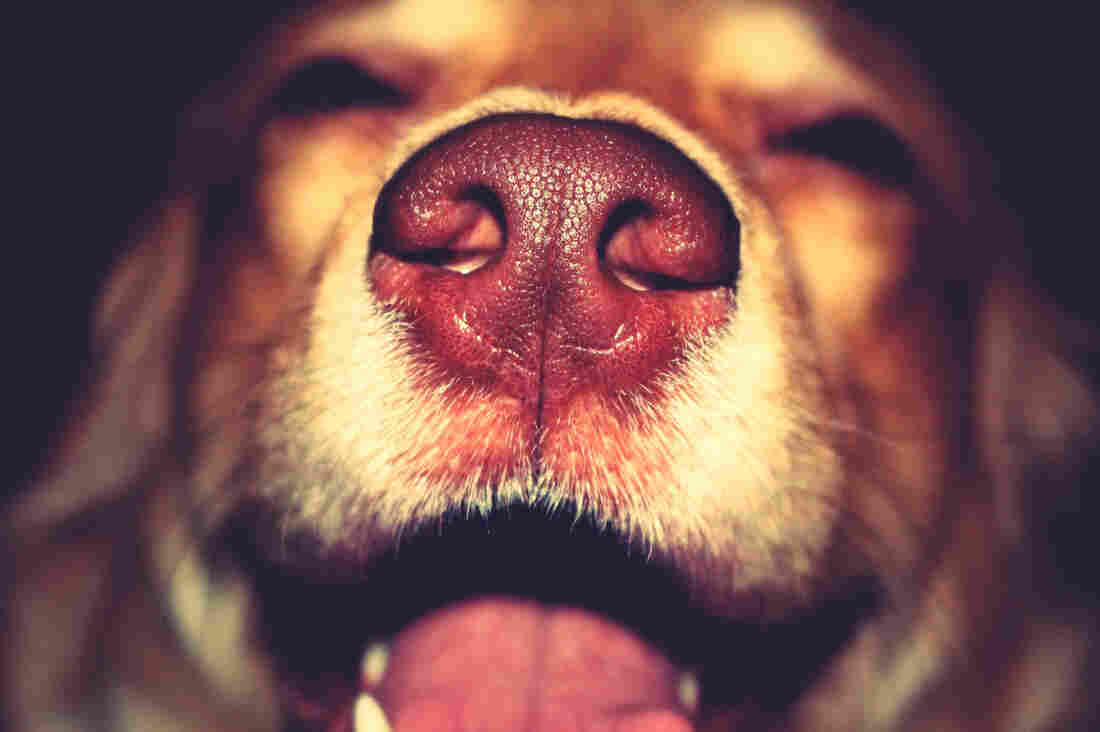 Dogs’ olfactory capacity — they can sniff in parts per trillion — primes them to detect disease. 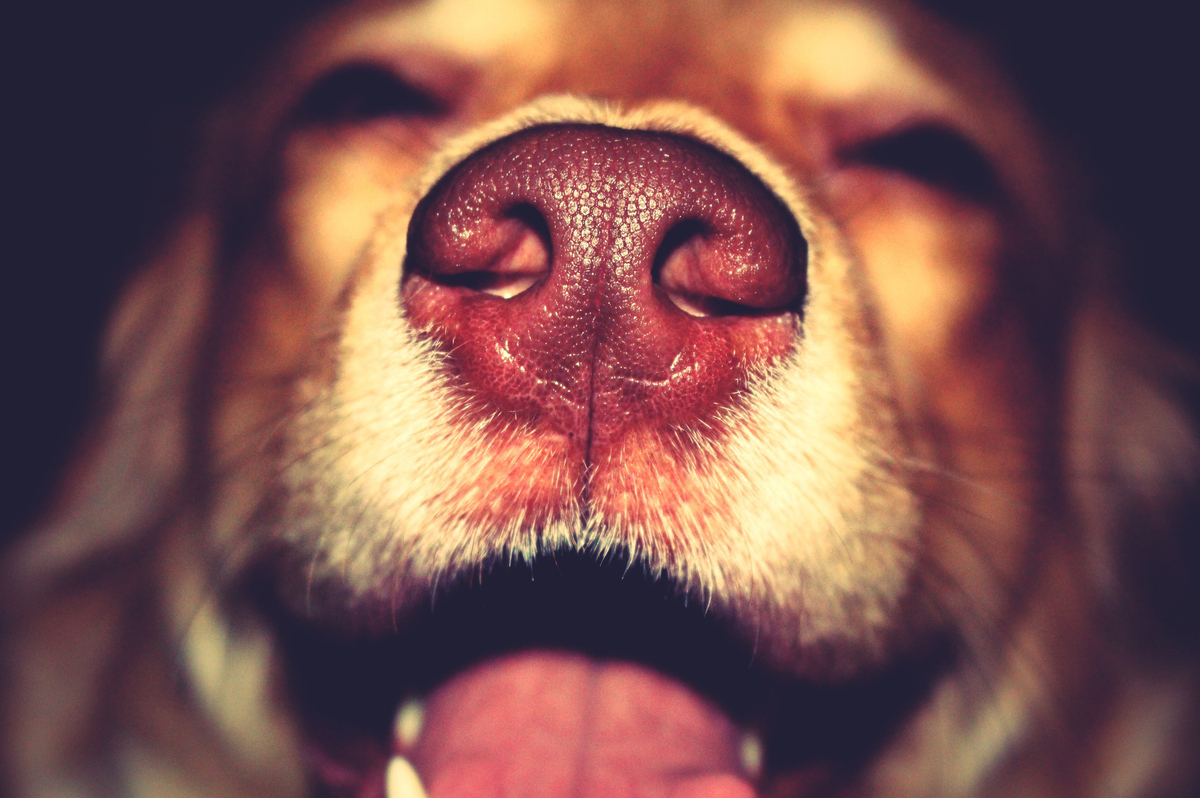 Dogs’ olfactory capacity — they can sniff in parts per trillion — primes them to detect disease.

As the owner of a yellow lab named Gus, author Maria Goodavage has had many occasions to bathe her pooch when he rolls around in smelly muck at the park.

Nevertheless, her appreciation for his keen sense of smell has inspired her write best-selling books about dogs with special assignments in the military and the U.S. Secret Service.

Her latest, Doctor Dogs: How Our Best Friends Are Becoming Our Best Medicine, highlights a vast array of special medical tasks that dogs can perform — from the laboratory to the bedside, and everywhere else a dog can tag along and sniff.

Canines’ incredible olfactory capacity — they can sniff in parts per trillion — primes them to detect disease, and their genius for observing our behavior helps them guide us physically and emotionally.

Goodavage spoke with NPR contributor John Henning Schumann, a doctor and host of Public Radio Tulsa’s #MedicalMonday about what she has learned about dogs in medicine

What led you to look into dogs in medicine?

I’ve been reading and writing about military dogs and Secret Service dogs for many years now, and it was sort of a natural next step. These are dogs on the cutting edge of medicine. They’re either working in research or right beside someone to save their life every day. And really, doctor dogs are, for the most part, using their incredible sense of smell to detect diseases. And if they’re paired with a person, they bond with that person to tell them something that will save their life.

You reported on dogs doing this kind of work all over the world.

Yes, I did go around the world. The first doctor dogs I learned about were in Japan. There’s a village about five hours north of Tokyo where scientists were doing some research among a population that has a very high level of stomach cancer. And I wanted to find the best of the best, cutting-edge medical dogs around the world. It was really fun to see these service and research dogs working with their people and how good they are. They’re incredibly good at detecting disease.

You also report on dogs that can detect ovarian cancer, which is personal for you.

I do have skin in this game, actually, because unfortunately, we have ovarian cancer in the family. My mom died of it.

The fact that the dogs can do this is exciting to me, and I think for so many people who have hard-to-detect cancers in the family.

What the dogs are doing now is remarkable and it’s because their sense of smell is so keen. They can sniff in parts per trillion. They can detect a tablespoon of a substance, like a packet of sugar, in two Olympic-sized swimming pools. Humans have six million olfactory receptors and dogs have up to 300 million. So their noses are really primed.

Another area in which dogs excel in the clinical world is for patients with diabetes.

Yeah. It’s amazing. We don’t know what the dogs are smelling, but the trainers are training the dogs on the scent of hypoglycemia and also hyperglycemia. The dogs are somehow able to put it together and tell the person 15 or maybe 20 minutes before the person’s devices even say, ‘Hey, you’re going into the low range!’ because the dogs detect this in real time. So the person has an extra bit of time to do what they need to do, take glucose or whatever.

I was fascinated to learn that doctor dogs may also have a role in detecting so-called “superbugs,” that is, antibiotic-resistant microbes.

Yes. Actually, there are three or four of these dogs working in a hospital in Vancouver who are sniffing out C. diff, which is one of those superbugs that can easily spread in vulnerable populations in hospitals and manifests in diarrhea and all kinds of issues that can actually kill people. And these dogs are stopping it in its tracks. Researchers have found that where these dogs work, the rates of C. diff really diminish. I hung out at this hospital one day and I just watched one of the dogs do his rounds, and he found what seemed to be C. diff — and before I knew it, they had a whole cleaning team.

How do dogs help people suffering from PTSD?

There are people from the military, war veterans and active duty soldiers even who are suffering from PTSD and who have gotten service dogs who, again, have been game changers. They save lives.

One of the dogs I learned about was placed with a soldier who had been to Iraq twice. He had PTSD and his life was falling apart. His marriage, his health, everything. He was on a cocktail of drugs. It made him a zombie. He hated that feeling. And one day someone told him about doctor dogs for PTSD.

He ended up getting one. Now if he’s feeling anxious, he’ll say, like, “snuggle” and the dog will just come in for a big hug, or another of various commands. His life changed dramatically for the better. His marriage is really good now. He’s a stable dad and he’s working. He’s down to only one or two meds.

You write about doctor dogs helping people with autism. Can you share an example?

Yeah, it’s really beautiful. Sometimes these dogs may be using their nose. Sometimes they’re just being highly observant. And dogs are. They watch our body language all the time. But there are now more dogs being used for children on the autism spectrum, and they are remarkable. They can usually tell ahead of time when a child is about to have a tremendous amount of anxiety, panic, meltdown or what have you. When there’s too much stimulation for a child with autism and the dog is there, they’ll lean into the child.

Dogs change lives not just of these children, but of the whole family.

There is a family I wrote about in Minnesota, with a sweet boy who waited for four years to get a service dog for his autism. He was not able to go to restaurants. The family, therefore, couldn’t go to restaurants. He couldn’t travel. He could barely leave the house. He did go to school, but that was tough, too. And so they waited four years. They tried to get a regular pet dog in the meantime, thinking, “Oh well, you know, it’s a dog. It’ll work.” But it was a disaster. It did not work at all as a service dog.

So they got a service dog named Lloyd. He’s a big black lab. As the boy met him, he started crying. His mother had never seen him cry. Tears of joy.

And right there, boom, everything changed. Lloyd is the super calming presence. He’s able to be with the boy and change his behavior. The boy could not go to the barber and get a haircut before Lloyd. Now all he has to do is just have his hand on Lloyd’s head.

And the boy and Lloyd like to have their own table at restaurants!

John Henning Schumann is an internal medicine doctor and serves as president of the University of Oklahoma’s Tulsa campus. He also hosts Studio Tulsa: Medical Monday on KWGS Public Radio Tulsa. You can follow him on Twitter: @GlassHospital.

Making Super Bowl Guacamole? Be Careful To Avoid The Pits Of An Avocado Hand Injury

Performing Arts And Cultural Organizations Close Their Doors Due To Coronavirus

Here’s why the Cybertruck’s windows broke, according to Elon Musk

Apple’s brand-new head of retail simply got about $8 million in stock grants, and...

How to ‘right-click’ on an iPad without a mouse, and a breakdown of all...