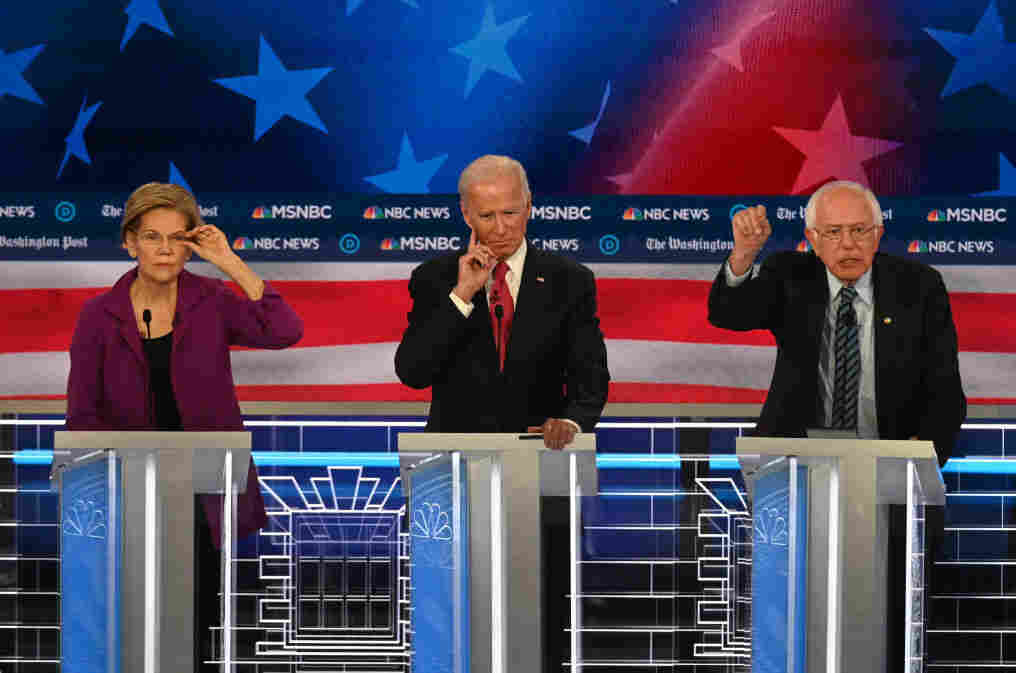 As Democratic presidential candidates prepare to debate again on Tuesday night, health care proposals are likely to come up, as they did during the November 20 debate. Presidential candidate Sen. Elizabeth Warren, D-Mass., (left) Former vice president Joe Biden and Sen. Bernie Sanders, I-Vt., (right) will be among the candidates debating. As Democratic presidential candidates prepare to debate again on Tuesday night, health care proposals are likely to come up, as they did during the November 20 debate. Presidential candidate Sen. Elizabeth Warren, D-Mass., (left) Former vice president Joe Biden and Sen. Bernie Sanders, I-Vt., (right) will be among the candidates debating.

If the last few Democratic presidential debates are any guide, tonight’s will likely delve into health care proposals. Do voters know what we’re talking about when we talk about various plans and concepts, including “Medicare for All?” Or any of the other health policy terms that get thrown around?

According to one poll from the Kaiser Family Foundation, 87% of Democrats support “Medicare for All,” while 64% of Democrats support “single-payer health care.” Here’s the catch — those two phrases describe almost the same thing. The language in this debate is murky, confusing and hugely consequential. So we’re laying out some key terms to help you keep up.

This is a kind of health care system where the government provides insurance to everyone. Think about it as if you’re a doctor: a patient comes in, and you treat them. Who’s paying you for that care? Under our current system, it could be a variety of payers: state Medicaid programs, Medicare, or a private insurance company like Aetna or Cigna or Blue Cross and Blue Shield — each with different rates and different services that they cover. Instead, under the single-payer model, there’s just one, single payer: the government.

If single-payer is fruit, Medicare for All is a banana. In other words, single-payer is a category of coverage, and Medicare for All is a specific proposal, originally written by presidential candidate Sen. Bernie Sanders (as he often reminds us). It envisions the creation of a national health insurance program, with coverage provided to everyone, based on the idea that access to health care is a human right. Private health insurance would mostly go away, and there would be no premiums or cost-sharing for patients.

Important note: it would not actually just expand Medicare as it exists now for all people (as you might guess from the name). Medicare doesn’t cover a whole lot of things that this proposed program would cover, like hearing and vision and dental and long-term care.

The idea of a “public option” was floated back in 2009 when the Affordable Care Act was being debated. The idea is that along with the private health insurance plans that you might have access to through your employer or through the individual insurance exchanges, there would be an option to buy into a government-run insurance program, like Medicare. Private insurance would still exist, but people could choose to get a government insurance plan instead.

There are many kinds of public option proposals, and different presidential candidates have their own ideas on how it would work, whether it’s lowering the age for Medicare access or creating a new program that’s not Medicare or Medicaid that people could buy into, among others. The idea is that the government might be able to offer a more affordable option for people, which could push down prices in the private insurance world.

Many opponents of Medicare for All and other health proposals use the term “government-run” as a dig against them, including President Trump. (Sometimes the term “socialized medicine” is used as well.) In the U.K. and some other places, the government doesn’t just pay people’s health care bills, it also owns hospitals and employs doctors and other providers — that’s a government-run health care system. The single-payer concept being discussed in this country’s presidential campaign would not operate like that — the industry would still be mostly private, but the government would pay the bills. How the government would generate the money to pay those bills is subject to debate.)

This isn’t a plan, it’s a goal that everyone has health insurance — that health insurance coverage is universal. The Affordable Care Act made a system for states to expand Medicaid and created the individual health insurance exchanges, , both of which significantly cut down on the number of uninsured people, but currently 27 million Americans do not have health insurance, and the rate of people who lack insurance is rising. Most Democratic presidential candidates would like to achieve universal coverage — the debate is about the best approach to get there.

The CDC Says Racism Is A Public Health Threat. Here’s What It Means

NASA discovered where that strange rectangle-shaped iceberg originated from

LIGO will be getting a quantum upgrade

This Is Why We All Need ‘Supermoons,’ ‘Blood Moons’ And ‘Pink Moons’ (And There...