Games industry journalist Jason Schreier has left his mark over the years by digging up behind-the-scenes dirt at sites like Kotaku and Bloomberg, but he may be best known for Blood, Sweat, and Pixels. This 2017 book broke down like a Schreier’s “greatest hits” collection: Every chapter followed a particular game and its lead studio through a wild “triple-A” period in the late ’00s and early ’10s.

If you’ve read BSP or any of Schreier’s other investigative stories, you’ll likely notice common threads at modern game studios, no matter which genre or specific company is involved. The first brilliant stroke of his newest book, Press Reset: Ruin and Recovery in the Game Industry, is to take that concept a step further. Individual games and studios get an occasional spotlight, but this time, Schreier often follows individual developer résumés to answer a few huge industry questions. 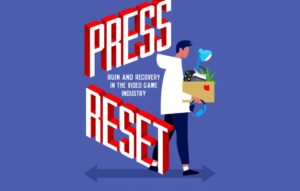 Press Reset: Ruin and Recovery in the Video Game Industry

(Ars Technica may earn compensation for sales from links on this post through affiliate programs.)

What are the common woes faced by game developers big and small? Why is the industry so fickle? And what hope is there for developers caught up in a job market so clearly marked by tumult and layoffs?

How close we came to Epic Scrooge

Press Reset has less in the way of tantalizing news nuggets than you might expect from an average Schreier production, though if you’re simply looking for a mix of gaming history and secrets, you’ll find those gems along the way.

But in a media world where a single headline can be plucked, shared, and misconstrued without anyone reading the source material, Schreier makes the wise decision to focus on arguably more humdrum stories of individuals whose experiences routinely get lost. To be fair, “humdrum” means these aren’t necessarily shocking stories about abuse and harassment. Rather, this book showcases the anger and mourning that individuals experience when confronted with an all-too-common game-industry issue: layoffs.

Press Reset begins with a surprisingly frank dive into Warren Spector‘s history as a game developer, fueled largely by his own quotes and insights. This opening section may lull you into expecting Schreier’s reporting-as-usual approach for the rest of the book. And the chapter does include its fair share of private boardroom moments. One of the book’s brand-new tidbits confirms how the Epic Mickey game series began: Disney pitched its megaton mouse to Spector as an available license—minutes after Spector suggested he was more interested in making a new Scrooge McDuck game. In another anecdote, Spector admits that he spent “a few months” in the mid-’00s working with Valve and Gabe Newell on a Half-Life 2 episode before that project was canceled.

You go public, you survive for decades, you get acquired, or you go out of business.

Yet the chapter sneakily sets a tone for the rest of the book by making clear that Spector—who’s among the most idolized industry innovators thanks to his work on System Shock and Deus Ex—has never been immune from the game industry’s capriciousness. Again and again, Spector would receive funding from a new publisher or business partner, only to see money dry up in ways that forced his hand. His story emphasizes Spector’s unpleasant decisions along the way. Usually, he had to decide whether to keep projects going at any cost or contend with publishers’ whims.

“The reality of the games business is, there are four endgames,” Spector says to Schreier in the book. “You go public, which nobody does. You survive for decades, like Valve. You get acquired. Or, you go out of business.”

NASA Takes A $10 Billion Breath As It Packs Up ‘Golden Mirror’ Ready For...