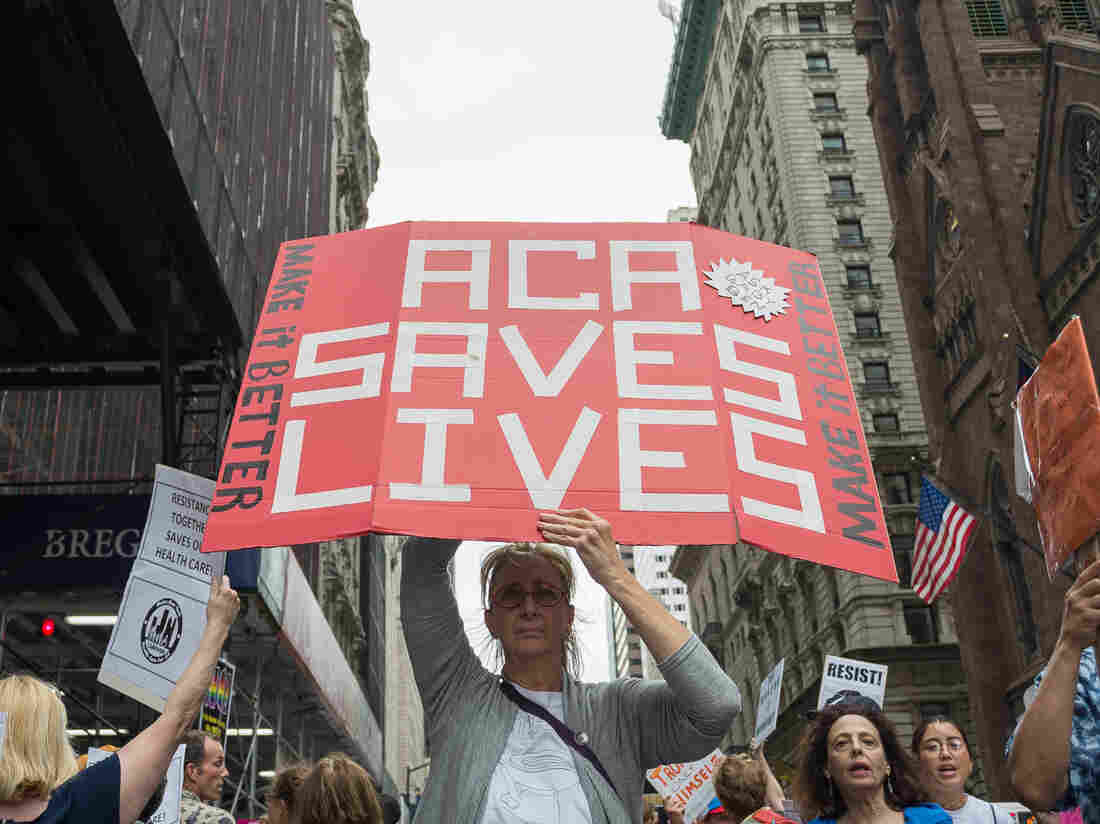 Since its passage, the Affordable Care Act has been the subject of multiple court cases and attempts to derail it in Congress — attempts that garnered protests in 2017 and beyond. The law has survived, so far, but a key provision was struck down Wednesday in federal court. 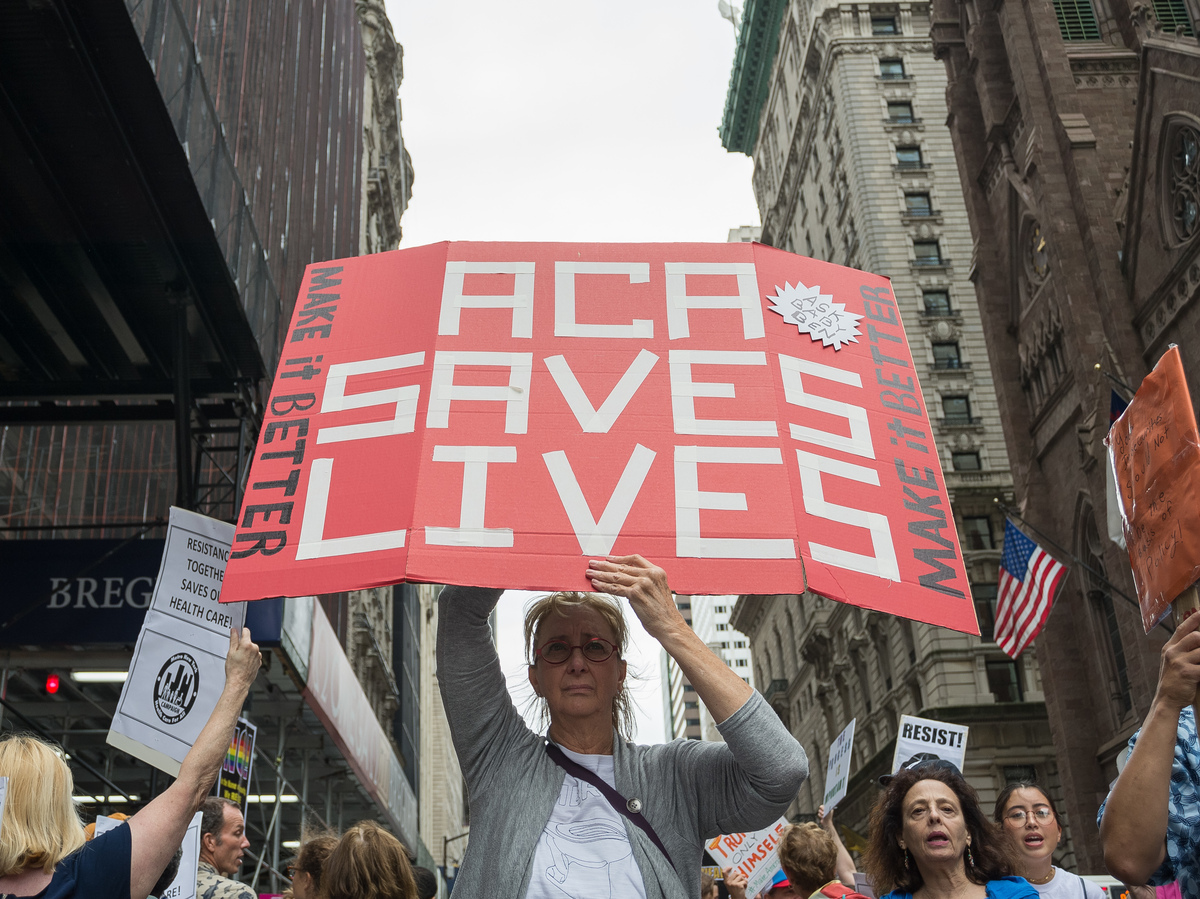 Since its passage, the Affordable Care Act has been the subject of multiple court cases and attempts to derail it in Congress — attempts that garnered protests in 2017 and beyond. The law has survived, so far, but a key provision was struck down Wednesday in federal court.

A federal appeals court panel in New Orleans has dealt another blow to the Affordable Care Act, agreeing with a lower-court judge that the portion of the health law requiring most people to have coverage is unconstitutional now that Congress has eliminated the tax penalty that was intended to enforce it.

But it is sending the case back to the lower court to decide how much of the rest of the law can stand in light of that ruling.

That likely means the fate of the law will not be settled before the 2020 election.

The stakes could not be higher. The case is widely expected to end up at the Supreme Court. California Attorney General Xavier Becerra, who is leading a coalition of states defending the health law, announced Wednesday night that he would appeal to the high court immediately. And if the high court — which has upheld the ACA twice since its original passage in 2010 — agrees with the appeals court, the decision could upend the nation’s entire health care system.

“It’s time to get rid of the uncertainty,” Becerra told reporters at a news conference. “Americans don’t need to be jerked around when it comes to their health care.”

Hanging in the balance is not only health coverage for the roughly 20 million Americans who are directly served by the ACA, but also hundreds of millions more whose health care and coverage have been affected by the thousands of changes that the ACA made to federal law. Those include provisions as wide-ranging as changes in Medicare drug copayments, requirements for calorie counts on menus, a pathway for approval of generic copies of expensive biologic drugs and, perhaps most important politically, protections for people with preexisting conditions.

The requirement for coverage, often referred to as an individual mandate, was inserted in the law to give insurers a wide pool of customers since they were now required to cover people with chronic medical conditions.

Concerns about losing that guaranteed coverage for preexisting conditions was a potent argument of the Democrats when they made big gains in the 2018 midterm elections.

President Trump heralded the court’s decision, saying that he has long asserted “that the individual mandate, by far the worst element of Obamacare, is unconstitutional.” He said overturning the mandate “will not alter the current health care system” and said his administration will work to protect guarantees of coverage for people with medical problems. But he didn’t give any specifics of how that would work.

Meanwhile, Democrats point out that the law has been working fine without the tax penalty – which was officially eliminated at the beginning of this year. They say that means, by definition, that the mandate is not necessary for the function of the rest of the law.

In the court’s decision, two of the three judges on the panel agreed with the plaintiffs in the case, who wanted the law struck down. Judge Jennifer Walker Elrod wrote that “the individual mandate is unconstitutional because it can no longer be read as a tax, and there is no other constitutional provision that justifies this exercise of congressional power.”

But at the same time, the appeals court majority declined to say how much else of the law can remain. Instead, it ordered the lower court “to employ a finer-toothed comb … and conduct a more searching inquiry into which provisions of the ACA Congress intended to be inseverable from the individual mandate.”

The third judge on the panel, Carolyn Dineen King, disagreed with both the lower court and the other two judges. In her dissent, she wrote that sending the case back to the lower court “will unnecessarily prolong this litigation and the concomitant uncertainty over the future of the healthcare sector.”

Democrats were angry.”Tonight’s ruling is a sharp reminder to Americans that a heartless lawsuit supported by Congressional Republicans and President Trump is why vital health care protection, especially protections for people with pre-existing conditions, are in grave danger,” said a statement from Senate Minority Leader Chuck Schumer.

Conservatives were pleased. “Today’s decision reminds us that Obamacare has been on shaky ground since its creation,” said Marie Fishpaw of the conservative Heritage Foundation. “Patients deserve better than the high costs, limited choices and narrow provider networks that Obamacare brought to the health care system.”

But many Republicans also know that if the law is struck down, it could cause major repercussions to the health system. Sen. Lamar Alexander (R-Tenn.) said in a statement that while he was satisfied that the individual mandate itself might be unconstitutional, “I am not aware of a single senator who said they were voting to repeal Obamacare when they voted to eliminate the individual mandate penalty.”

A group of Republican governors and state attorneys general filed the case, Texas v. United States, in early 2018. They charged that when Congress eliminated the financial penalty for not having insurance as part of its 2017 tax bill, it rendered the rest of the health law moot. That is because the 2012 Supreme Court decision upholding the law said it was the tax that made the law constitutional, since the ACA relied on appropriate taxing powers given to Congress through the Constitution.

Legal scholars on both sides say that the high court’s logic is flawed, but in December 2018, U.S. District Judge Reed O’Connor, of the Northern District of Texas, ruled the entire law unconstitutional.

The Trump administration, meanwhile, has taken several positions on the case. Last year, it told the lower court it did not believe eliminating the tax required the entire law to be declared void.

But Justice Department officials said they supported striking down the provisions of the law most closely tied to the tax penalty: the ones requiring insurance companies to sell coverage to people with preexisting health conditions and not charge them more.

Those are among the most popular provisions of the law. Democrats’ success in taking back the House in last year’s midterm elections was largely credited to consumers’ fears of losing that provision when Republicans threatened to repeal the health law in 2017.

After the lower-court ruling, however, the administration decided to support the GOP plaintiffs. In March, a Justice Department spokeswoman said officials had “determined that the district court’s comprehensive opinion came to the correct conclusion and will support it on appeal.”

That left a group of Democratic state attorneys general to defend the law, led by California’s Xavier Becerra, along with the U.S. House of Representatives — which voted in January, after Democrats formally took over the majority, to join the lawsuit.

But in July, the Trump administration’s position shifted again. In a filing with the court, its attorneys argued that perhaps the health law should be invalidated only in the GOP states that are suing, rather than in all states. It is unclear how that would work.

A New Normal. How Private Sector Meteorologists Are Adjusting Amid COVID-19 Outbreak

People Who Use Dating Apps Are More Likely To Have ‘Dark’ Personality Traits, Say...

At Least 7 Things Dr. Ted Fujita Gave Us Beyond A Tornado Scale