Science and Tech News
Home Hospital Over 900 Infants Died In One Hospital In India In 2019. What... 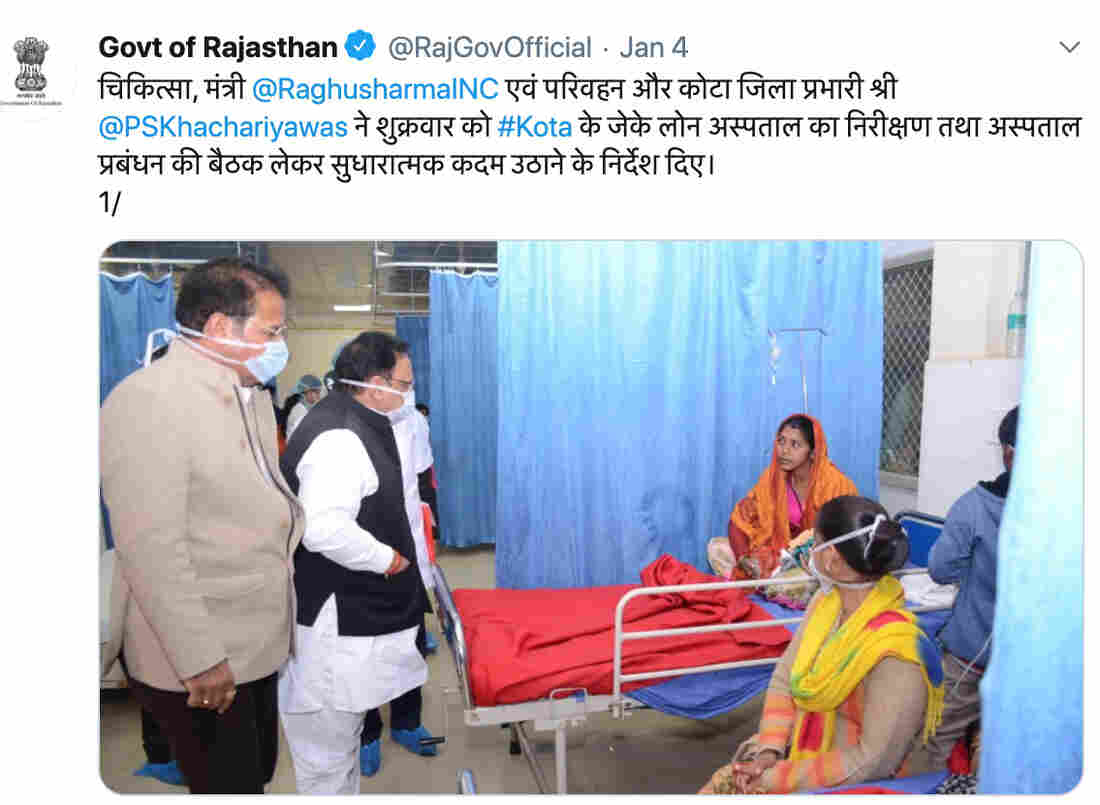 The Rajasthan government tweeted out a photo of its minister of health Dr. Raghu Sharma on a visit to inspect J.K. Lon Maternal and Child hospital in Kota, where nearly 100 infants died in December.

In December 2019 and in the first week of January, 104 infants died in a government-run hospital in Kota, a city in the northern Indian state of Rajasthan.

And in one 48-hour period in mid-December at the J.K. Lon Maternal and Child Hospital, there were ten deaths: five newborns and five children under 2 years of age.

The deaths made nationwide headlines, but despite the media coverage — and the ensuing political infighting over the cause of the deaths — this is not a new turn of events. Over the course of 2019, the hospital recorded 940 infant deaths.

Hospital authorities did not comment on specifics except to note that some of the infants had low birth weight. The World Health Organization reports that babies who die within the first 28 days of birth often suffer from conditions and diseases associated with a lack of quality care at birth or in the days immediately after.

As the media ramped up coverage of this issue, the infant deaths became a political battleground. Members of the BJP, Prime Minister Narendra Modi’s party, and its main rival, the Congress, which is in power in Rajasthan, blamed each other for alleged administrative negligence and implied that the hospital had misused funds. The National Commission for Protection of Child Rights (NPCR), a government body with officials appointed by the BJP, examined the hospital in the last week of December. Their report to the media described crumbling infrastructure, broken window panes and pigs roaming on campus.

On January 2, India’s health minister Dr. Harsh Vardhan issued a press release stating that he would be inspecting the hospital along with a multidisciplinary team of pediatricians. In a series of tweets, Vardhan said that 91.7 lakh rupees ($127,629) had been advanced to J.K. Lon hospital in 2019 under the National Health Mission. He pledged additional financial assistance to fight neonatal deaths.

Despite the evidence of improvement, which UNICEF has confirmed, the latest government statistics indicate that the problem remains severe in the northern Indian states of Madhya Pradesh, Rajasthan, Bihar, Assam and Uttar Pradesh.

For context on this issue, NPR reached out to Dr. Shiv Chandra Mathur, based in Jaipur, Rajasthan. Mathur is a specialist in preventive and social medicine and author of the book Public Health in Rajasthan, published by the State Institute Of Health and Family Welfare, in 2007. Though Dr. Mathur was not a part of the team that inspected the hospital during this crisis, he has been teaching and strengthening primary health care and public health systems for over 40 years in the region and has specialized in maternal, newborn and child health as well as health sector reform. This interview has been edited for length and clarity.

Every year, we hear reports of infants dying soon after birth from causes that could have been prevented. What kinds of conditions are responsible for tragedies like this?

There are many factors to consider. Doctors are often blamed but it’s not always medical negligence that causes these situations.

What problems can you identify?

I would say a lack of proper infrastructure — a limited [number of] beds creating conditions of overcrowding, where newborns are placed closer together and at more risk for potential infection to spread, as well as [lack of] hygiene all around public hospitals. Also, in many government-run hospitals, neonatal intensive care units have a dearth of trained nursing staff.

Systems that ensure hygiene are lax. For instance, there are no [limits on] visiting hours nor is there a bar on the number of visitors allowed into the hospital wards. Visitors often don’t wear masks while entering NBCU [Newborn Care Units]. Poor hygiene practice increases the risk of infection. The chances of contracting life-threatening bacterial infections like septicemia [blood poisoning] are high, especially during the first month, when a child’s immune system is vulnerable.

Also, it isn’t just within the hospital — there are threats from the outside too. For instance, if you travel a one-mile radius around the J.K. Lon Maternal and Child Hospital in Kota, you can understand where the germs are coming from. You’ll find open defecation, wild pigs, mired courtyards, often choked sewers, and indiscriminate tobacco spits.

In order to save lives, we need a sharper focus on sanitation. We need to change our behavior in and around hospital zones, for that matter all around human habitation!

Why do you think there were so many infant deaths reported in just the last month in that one hospital?

Hypothermia is a killer. And this year, winter in Rajasthan is said to be the worst in the last two decades. According to reports, several incubators [warmers] were not functioning in the hospital in Kota, when the infants died. There were broken windowpanes in the hospital.

If enough warmers aren’t in working condition, especially for premature and low-birth weight infants, it can be fatal. Regular maintenance checks should be made to keep equipment functioning at peak efficiency. Health-care workers must be trained better at operating the equipment. It is important to advocate kangaroo care [a method of holding premature infants so that there is skin-skin contact which keeps them warm] and to monitor neonates constantly. The right antenatal care can make all the difference. But there is a severe shortage of trained staff who can provide [neonatal] nursing care across India.

So you think better training is needed for health-care workers.

Yes, better training is needed at every level of public health hierarchy.

The government of India launched the National Rural Health Mission in 2005 to help public health system of each state. The IPHS — Indian Public Health Standards — were developed at [rural] health facilities.

Central government support to every state government is generously available for rural health centers. Even after one-and-half decades of such a support system, large numbers of health facilities have yet to come up to IPHS standards because there are severe shortages in doctors and medical staff in rural areas.

Keep in mind that the numbers of public health centers in Indian states are very large. It’s an enormous operation. But we don’t have enough manpower to go around — lesser numbers of doctors are working in public health.

Are there efforts to educate parents on this and other issues about neonatal health?

Anganwadi Workers [government appointed workers in rural child care and health centers in India] and ASHA [accredited social health activists] have a great responsibility in educating parents about prenatal and postnatal care. They should have more intensive training. The effectiveness of their work will reflect in how well women are prepared mentally and physically for birth.

Do you believe that India is making progress in infant mortality, despite these setbacks?

Public health interventions have made a substantial change. Four decades ago, in 1975, we were losing as many as 124 infants [for every 1,000 live births] in Rajasthan. Today, that number is less than 38. We are making progress, but to see more of an impact at this stage, we need more focused interventions.

How do you judge the reaction of the government?

Rather than politicizing the issue, or suspending doctors and demoralizing them when tragedies like this occur, bureaucracies controlling public health systems need to be more sensitive, empathetic and draw lessons to facilitate and expedite the implementation of public health policy.

This is such a tragedy for the parents. How does the medical community react?

Death diminishes everyone — doctors and health-care workers feel the loss of every preventable death acutely.

Kamala Thiagarajan is a freelance journalist based in Madurai, India, who has written for The International New York Times, BBC Travel and Forbes India. You can follow her @kamal_t.

How to quickly type emoji, emoticons, and signs in Windows 10