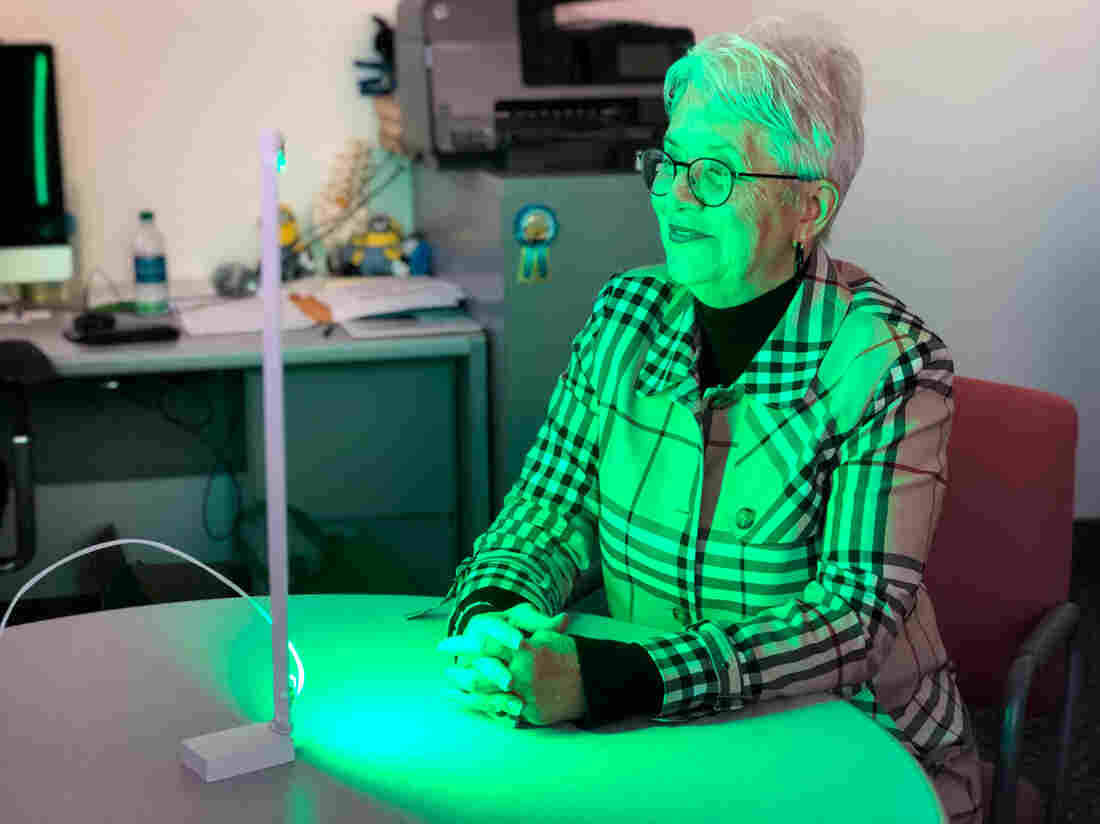 Ann Jones has been spending two hours each day in front of a green LED light as part of an experimental treatment aimed at alleviating migraines and other forms of chronic pain. 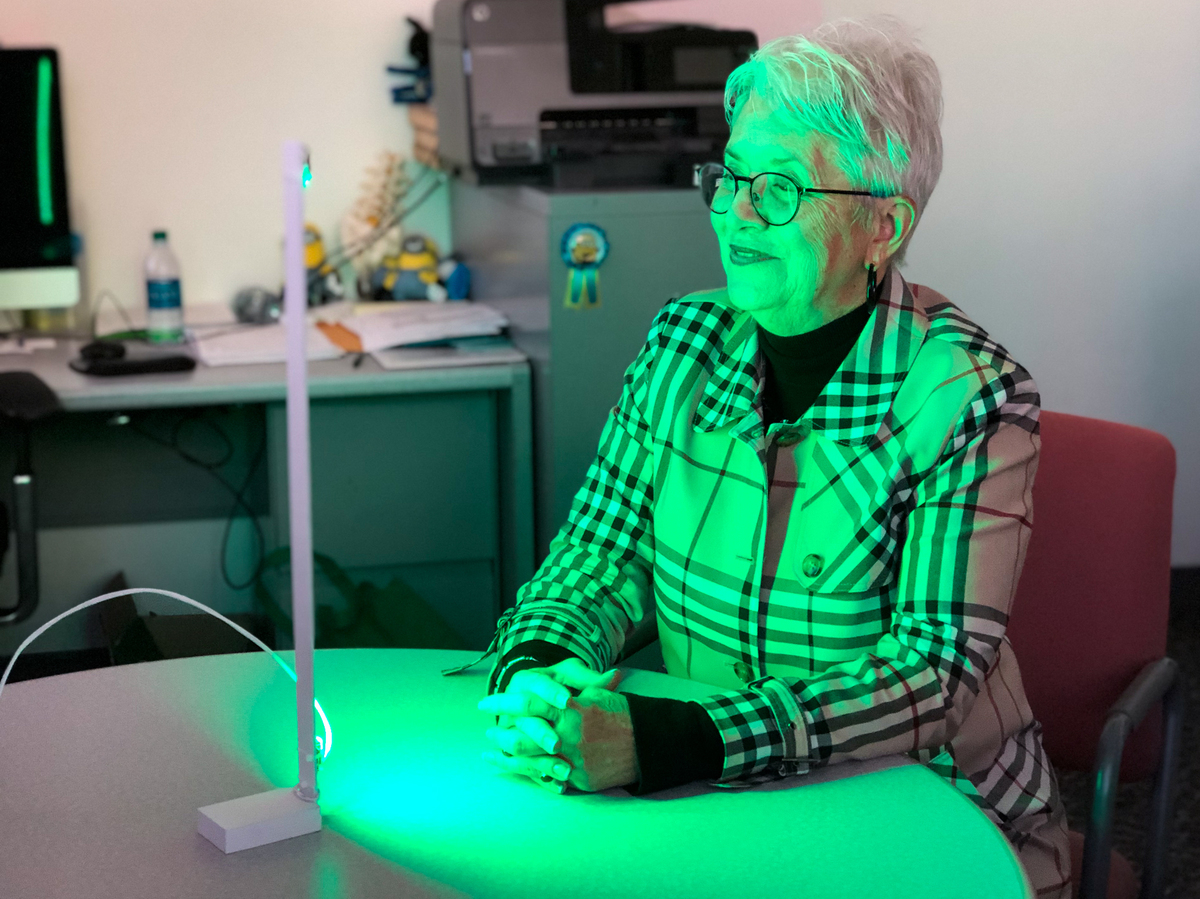 Ann Jones has been spending two hours each day in front of a green LED light as part of an experimental treatment aimed at alleviating migraines and other forms of chronic pain.

Ann Jones tried everything short of surgery for her chronic migraines, which have plagued her since she was a child.

“They’ve actually gotten worse in my old age,” says Jones, who is 70 years old and lives in Tucson, Ariz.

Jones would have as many as two dozen migraines a month.

Over the years, some treatments might work initially, but the effects would prove temporary. Other medications had such severe side effects she couldn’t stay on them.

“It was pretty life-changing and debilitating,” Jones says. “I could either plow through them and sometimes I simply couldn’t.”

In 2018, her doctor mentioned a study that was taking place nearby at the University of Arizona: Researchers were testing if daily exposure to green light could relieve migraines and other kinds of chronic pain.

“This is going to be one more thing that doesn’t work,” she thought to herself.

But she brushed aside the hesitation and enrolled in the study anyway.

It began with her spending two hours each day in a dark room with only a white light, which served as the control. In the second half of the study, she swapped out the conventional light for a string of green LED lights.

For more than a month, Jones didn’t notice any change in her symptoms. But close to the six week mark, there was a big shift.

She began going days in a row without migraines. Even when the headaches did come, they weren’t as intense as they had been before the green light therapy.

“I got to the point where I was having about four migraines a month, if that many, and I felt like I had just been cut free,” Jones says.

Some patients in the study of about 25 people noticed a change in just a few days. For others, it took several weeks. Dr. Mohab Ibrahim, the migraine study’s principal investigator and an associate professor at the University of Arizona, says on average, people experienced a 60% decrease in the intensity of their migraines and a drop from 20 migraines a month to about six.

The results of the migraine study aren’t published yet. But they build on a small but growing body of research suggesting a link between green light and pain, including animal research done by Ibrahim’s team. While there are not yet robust data on humans, some researchers see promise for a drug-free approach that could help with migraines and possibly other forms of chronic pain.

A hunch and a headache

At his office in Tucson, Ibrahim demonstrates a device he has been using with patients. It’s a thin vertical stand mounted with green LED lights — an update from his earlier model which was a simple string of lights.

Ibrahim, who directs the chronic pain clinic at Banner – University Medical Center Tucson became interested in the idea of green light therapy because of something his brother told him about his headaches. Instead of taking medicine, he would sit in a garden and eventually they would subside. 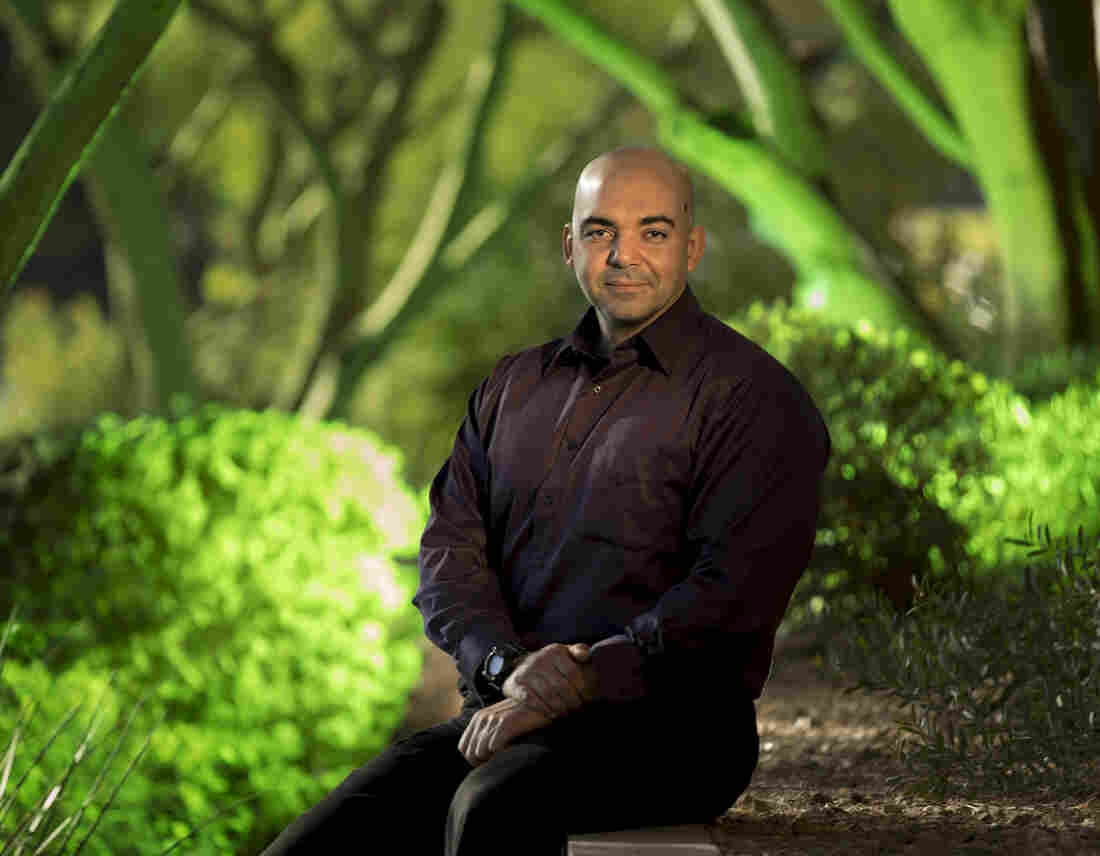 Dr. Mohab Ibrahim, an anesthesiologist and associate professor at the University of Arizona, is exploring the potential to control pain through regular exposure to green light. 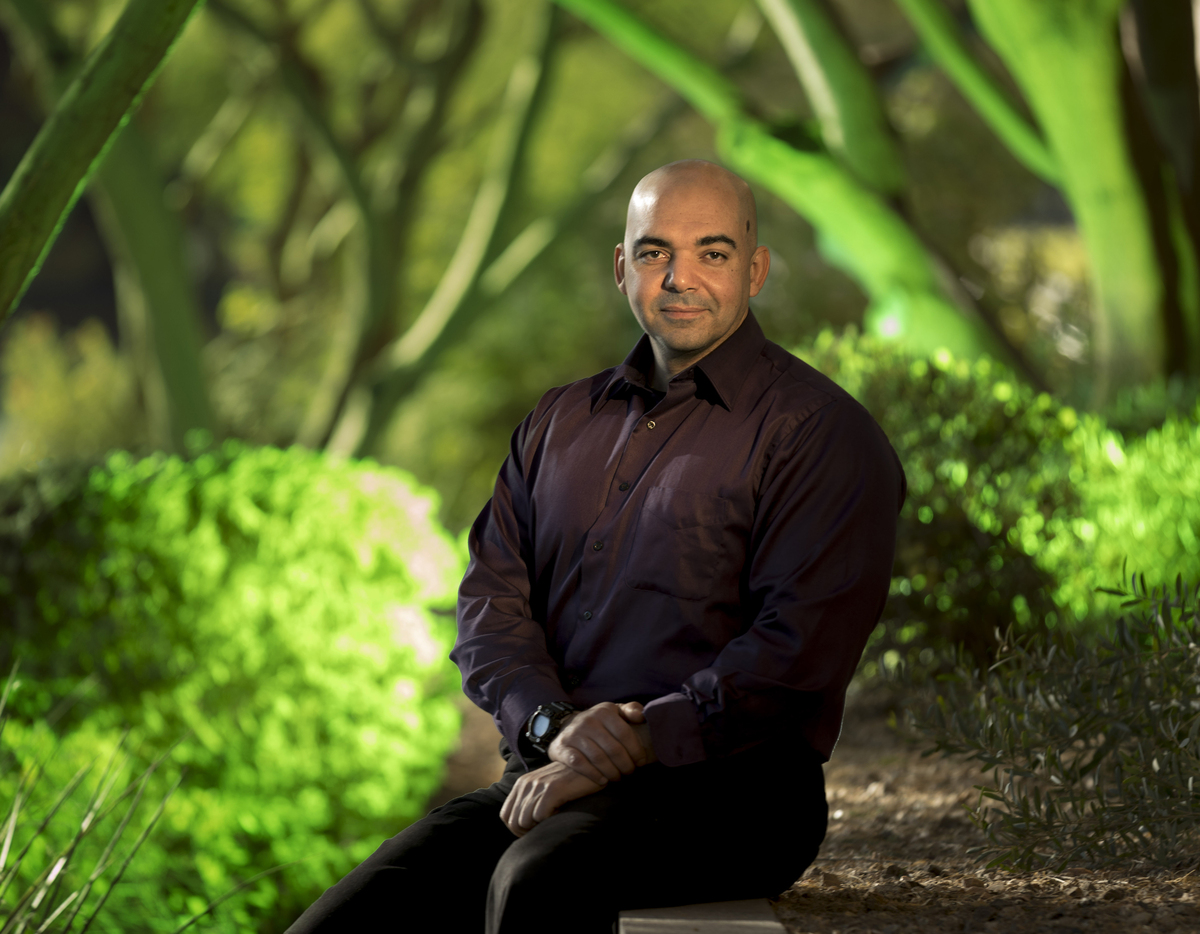 Dr. Mohab Ibrahim, an anesthesiologist and associate professor at the University of Arizona, is exploring the potential to control pain through regular exposure to green light.

That got Ibrahim thinking about the color green and how green light could be applied as a therapy.

“There was a healthy dose of skepticism,” he says. “It was kind of strange why are you using light to treat pain?”

This low-tech approach to treating pain may seem out of synch with Ibrahim’s credentials.

He’s an anesthesiologist with a Ph.D in pharmacology and toxicology.

But he started to explore the idea anyway, designing an animal study published in the journal Pain in 2017, that demonstrated the pain response of rats decreased when exposed to green light.

The idea that there’s a link between green light and pain is being explored by several research groups.

Research led by Rodrigo Noseda at Harvard Medical School looked at light sensitivity, known as photophobia, a common symptom of migraines. The research, published in 2016, found that green light is significantly less likely to exacerbate a migraine compared to other colors and, in some cases, can actually decrease the intensity of the headache. The group at Harvard has also shown that green light can “trigger positive emotions during migraines,” in contrast to colors like red, which are associated with negative feelings.

Ibrahim and his research colleagues also found a connection with the visual system. As part of their 2017 study, they fitted tiny contact lenses on the rats.

They found only the animals that could see green, either from an external light or through green lenses, had a drop in their pain response.

“We basically made the conclusion that whatever effect is happening is taking place through the visual system,” he says. “That’s why when we recruited patients we told them you cannot fall asleep when you’re undergoing this therapy.”

Ibrahim says there’s a lot more to investigate about the biological underpinnings of the green light treatment, but their research is offering some clues.

For example, Ibrahim’s 2017 study tested the effect of the opioid reversal drug naloxone on rats that had been exposed to green light. After administering the drug, there was a “complete reversal” of the pain relieving effects of the green LED.

“Whatever the mechanism is we thought maybe the endogenous opioid system might be involved,” Ibrahim says.

Ibrahim says his most recent research supports the theory that green light therapy is working in multiple ways: “It’s a concert of mechanisms working in harmony toward a common goal.”

Ibrahim was awarded funding by the National Institutes of Health to look deeper.

Ibrahim is also studying the effect of green light for conditions like fibromyalgia, nerve pain related to HIV and chemotherapy and a painful bladder condition called interstitial cystitis.

The interaction between light and pain

The link between light and pain is a promising area of research, says Mary Heinricher, Professor and Vice Chair for Research in the Department of Neurosurgery at Oregon Health & Science University, but she says she’s not yet convinced that color is the most important variable in modulating pain.

“The effects of the green light is pretty subtle,” Heinricher says. “We need the parallel work showing what are the relevant neural circuits if we are going to make anything tremendously useful for people.”

She says it also remains to be seen if the green light research translates into humans, which process color differently than rodents.

Heinricher doesn’t expect green light will be a primary treatment for chronic pain anytime soon, but says the research is a laudable and necessary step as we tease out the underlying science.

“We have tended to run to drugs, and not thought about intervening in the physical environment,” she says. “This is a wake up call. There’s something going on there.”

Heinricher says her team happened upon this area of research accidentally when they noticed certain cells that facilitate pain responded to a flash light in a dark lab.

“I was quite surprised,” she says. “If you had asked me this five years ago, I would have said no way.”

“It is a happy thought. I hope it works,” says Levin, director of the Headache Center at the University of California, San Francisco. “A lot of these other treatments don’t work as well as we’d like, and a lot of them cause side effects.”

Migraine sufferers are “very sensitive to environmental stimuli,” and Levin says the idea of manipulating light to lessen the headache severity is a “plausible” approach.

Levin says there isn’t enough evidence yet to support green light as a truly beneficial treatment for headache pain.

“It is very intriguing, but it still has a long way to go,” says Dr. Andrew Hershey, who is co-director of the Headache Center at Cincinnati Children’s Hospital Medical Center

“Trying to do a classic placebo-controlled study to see if one light works or not is likely not doable in this area,” he says, since the patient knows the color of the light.

He says positive results from patients who spend time with just a green light may also relate to them spending less time with irritating light, like the blue glow of computers and phones.

From light box to glasses

Ibrahim’s patient Ann Jones decided to keep the green light, even though the study’s over. She discovered when she stopped doing the treatment regularly, her migraines reemerged.

“I made a commitment to go back on the green lights daily,” she says. “The very next day I did not have migraine, and for five straight days I didn’t have a migraine.”

Jones says the only downside is finding time to spend in a dark room with just a green light for company.

In a separate clinical trial, researchers at Duke University are seeing if that problem can be solved through a wearable treatment.

“Having a patient sit in a room with green ambient light is not necessarily conducive to normal life,” says Padma Gulur, a professor of anesthesiology, who is leading the Duke study.

Gulur’s NIH funded study is looking at how different shades of glasses — clear, blue and green — affect postoperative pain and fibromyalgia. She says the early results are encouraging her to pursue larger human studies for multiple conditions.

“It just goes to show the power of our nervous system in how it responds and adapts to different stimuli,” says Gulur.

She says “minimal harm, ease of access and compliance” are all strong cases for seriously considering the feasibility of green light.

“Even if we see 50% of patients benefit from this, then already it becomes something worth trying,” she says.

Duane Lowe is a chiropractor with the Department of Veterans Affairs in Grand Junction, Colorado. He works with patients in chronic pain. After reading some of Ibrahim’s research, Lowe wanted to see if it could help his own patients.

He ordered some green glasses online.

“I just gave them to patients to try for a week,” he says. “After a very short period of time, patients were coming back giving very positive reviews.”

So he kept doing it.

He makes sure to tell the patients this is experimental – no one knows how well glasses work compared to the LED light, or how long you need to wear them.

“I didn’t actually have to worry about whether these studies have been done because the side effects of giving someone green glasses is almost nil,” he says.

Dr. Mohab Ibrahim enjoys the simplicity of the treatment, too.

“In my opinion, the most ideal drug or therapy is something that’s first safe, effective and affordable,” he says.

Researchers Warn Nearly Half Of Child Care Centers In U.S. Could Be Lost To Pandemic

IBM is handing out 1,500 DJI drones to aid with natural catastrophes

Gravity affects decision-making more than we can comprehend