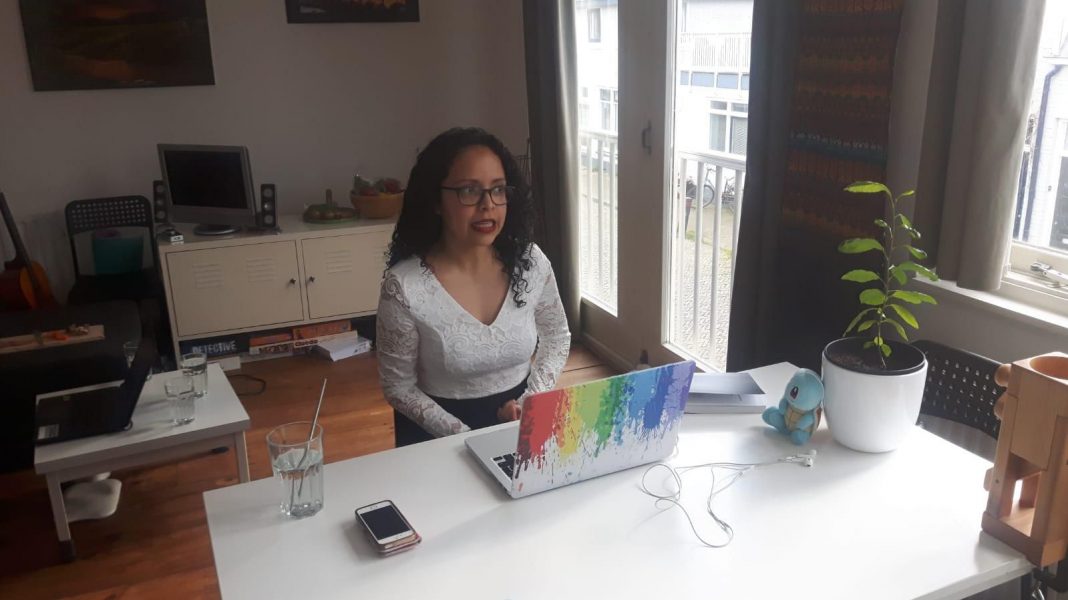 Astrophysicist Kristhell Lopez, who studies mysterious signals that might be mid-sized black holes, is one of just two female astrophysicists from Guatemala, a country with a long history of astronomy before Spanish colonization.

Lopez, originally from Guatemala City and now based in the Netherlands, says the goal of the project she dedicated her PhD to was to unravel the true nature of deep space signals coming from ULXs (Ultraluminous X-ray sources).

“The goal of the project is to estimate their mass, as their nature is yet to be confirmed. To achieve this, we did a NIR (near-infrared) survey of all ULXs located up to a distance of 10 Mpc (mega-parsec) from our Galaxy, with the hope to identify if they were accreting matter (i.e. “feeding off”) from a RSG (red supergiant) star,” she said, adding that the project originated 8 years ago and was continued on by her.

Lopez says that ULXs are interesting as they might just turn out to be intermediate mass black holes.

“This is very important!” she said, adding that while astronomers have evidence of stellar-mass black holes between 5-20 times the mass of our sun and of supermassive black holes in the center of galaxies, at over 1 million solar masses, evidence for mid-sized black holes has been scant.

In September, a team including Richard Udall and Karan Jani, using a different technique called gravitional wave measurement published a paper showing what Jani says is the first evidence so far of medium-sized black holes.

Lopez says studying ULXs was one of the first ways to search for intermediate mass black holes, with the caveat that the true nature of ULXs is still unknown.

Lopez says her passion for astronomy started by just looking at the night sky.

“I remember observing non-stop at the stars and thinking how beautiful they are, how they look so much like diamonds… It mesmerized me,” she said.

Lopez says astrophysics studies weren’t offered on any level, so she did her undergraduate studies in physics at the Universidad del Valle de Guatemala and was then granted a full scholarship to study a Masters in Astrophysics in Austria.

Lopez was also one of the organizers of the First Guatemalan Conference in Archeoastronomy, focused on how the country’s Mayan ancestors viewed the sky/Universe influenced their civilization’s growth. Mayan texts from the pre-colonial era show a sophisticated grasp of astronomy.

She says the conference was organized in response to the widely-reported belief that the world was going to end in 2012 as “predicted” by the Mayans.

“We wanted to debunk the myth of the end of the world” she said, “we invited international astronomers and archeologists to give talks, seminars and workshops about Astronomy and Archeology.”

Even after entering and completing her PhD position at the SRON Institute in the Netherlands, Lopez continued to face challenges, as the Covid-19 pandemic meant she defended her PhD from her kitchen, over Zoom.

Her successful defense in April 2020 means she is now the first female Guatemalan astrophysicist to do her undergraduate studies in Guatemala.

“I can tell you that I know how much it means for a woman of color to see herself represented in any field,” she said, “I did not have anyone to look up to.”

“We are only 7 Guatemalan astrophysicists in total, in the whole history of the country and only 2 of us are women!!”

The other female Guatemalan astrophysicist is the country’s first, Tanya Urrutia, who completed her undergraduate studies in Germany.

“I did not know about Tanya until I started my PhD,” Lopez said, adding that this meant she only had male role models to follow.

Representation in astronomy is not just an issue in Guatemala. In Colombia, a growing group of female astrophysicists have joined togehter in a platform called CHIA (Colombianas Haciendo Investigación en Astrociencias @AstroChia), named after the goddess of the Moon, in the Chibcha language, which was once spoken by the Muisca, an ancient civilization that once inhabited the central highlands of what is now modern Colombia.

One of CHIA’s co-founders is Colombian astrophysicist Valentina Abril Melgarejo, who uses some of the biggest telescopes known to humanity to look back through time to when galaxies considerably reduced their production of stars.

MORE FROM FORBESHow Does A Galaxy Grow? This Colombian Wants To Know!By Andrew Wight

Another CHIA co-founder is Andrea Guzman Mesa, also from Colombia, started off with a desire to follow a modern languages degree but is now a PhD student in Astrophysics at the University of Bern, studying the atmospheres of planets far outside of our solar system.

MORE FROM FORBESWhat Is This Colombian’s Exoplanet Work? It’s Out Of This World!By Andrew Wight

This Week’s ‘Wolf Moon’ Kicks-Off A Year Of Three ‘Supermoons,’ A ‘Blue Moon’ And A ‘Blood Moon’

How The Appalachian Mountains Kept The Mid-Atlantic Frigid On Tuesday

CHEAP: Get $530 off an Alienware Aurora desktop

The 33- year-old American who simply ended up being the very first individual to...

Teach Your Kids to Roughhouse in ‘Slow-Mo Mode’