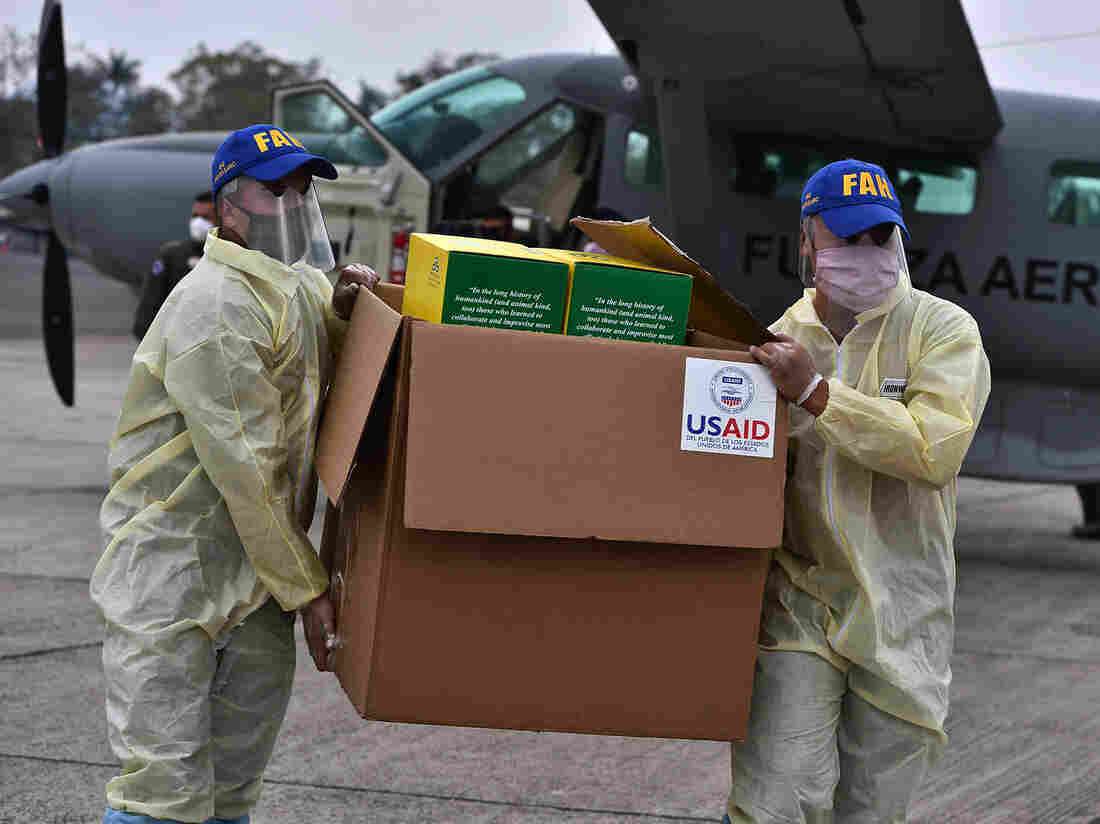 Foreign aid takes many forms — and Trump and Biden have differing perspectives. Above: Members of the Honduran Armed Forces carry a box of COVID-19 diagnostic testing kits donated by the United States Agency for International Development and the International Organization for Migration. 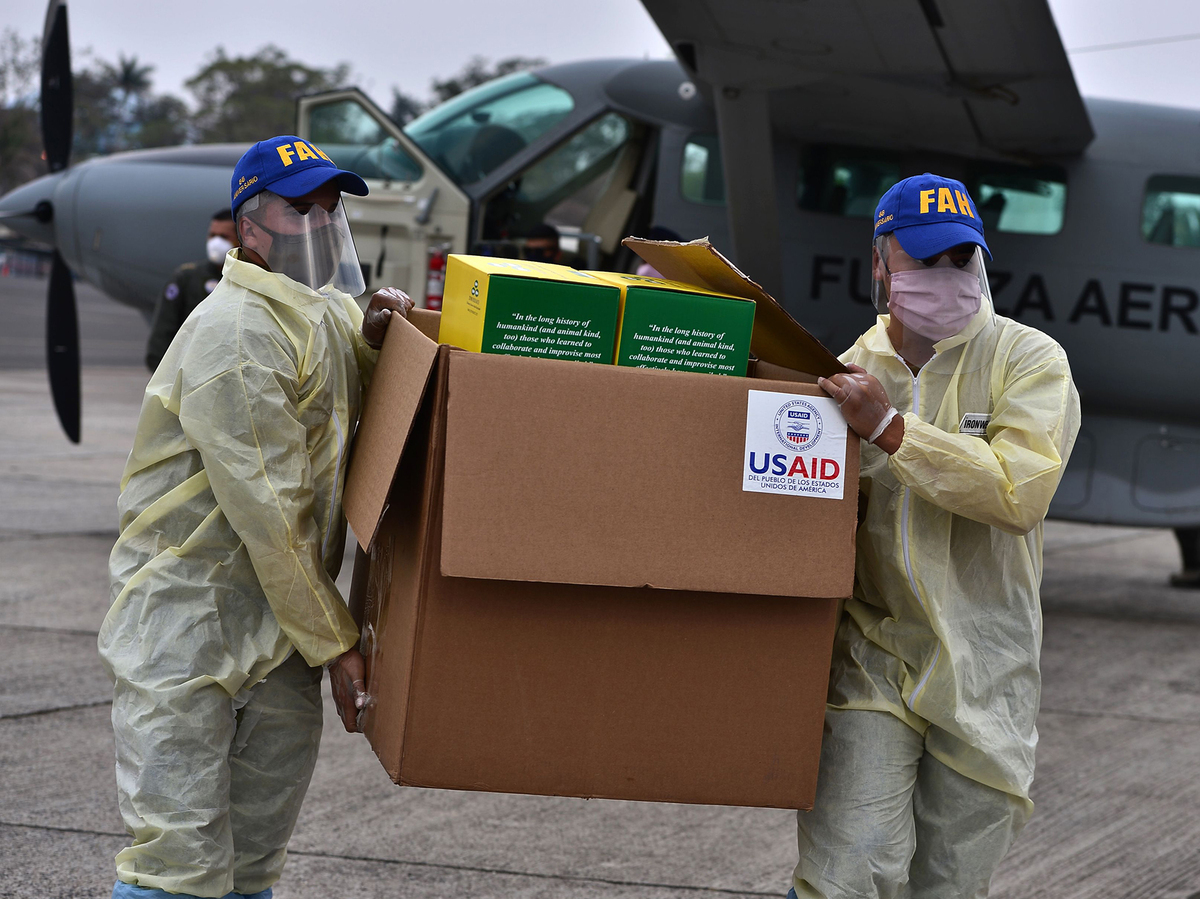 Foreign aid takes many forms — and Trump and Biden have differing perspectives. Above: Members of the Honduran Armed Forces carry a box of COVID-19 diagnostic testing kits donated by the United States Agency for International Development and the International Organization for Migration.

This election season – like many before it – has been dominated by domestic issues. But whether Americans elect Donald Trump or Joe Biden president will also have significant consequences for the rest of the world, especially those countries that count on U.S. foreign aid. And when it comes to aid and other global issues, Trump and Biden’s policies are starkly different.

While former Vice President Biden has outlined some of his plans and priorities for the future, President Trump’s campaign has focused more on what he’s done in his first term. Still, Trump’s past words and actions should be a good indicator of how he intends to move forward if re-elected.

Below is a summary of what Trump and Biden have said (or done) on these matters.

On the U.S. foreign aid strategy

Donald Trump: Trump’s “America First” mantra extends to his foreign aid philosophy. In 2018, he told world leaders at the United Nations (U.N.) General Assembly, “Moving forward, we are only going to give foreign aid to those who respect us and, frankly, are our friends.” For example, last year, he froze $450 million in aid to Guatemala, Honduras and El Salvador for what he described as their failure to stem migration. He later resumed aid, sending $143 million to the region. Under his administration, the U.S. Agency for International Development (USAID) also underwent some reforms that have been largely praised by the development sector, like moving away from a traditional donor-recipient model of aid to more partnerships. However, former USAID Administrator Mark Green who oversaw the changes says the president was “not really” involved in the work.

Joe Biden: “We’d bring aid back to the center of our foreign policy,” Antony Blinken, a foreign policy adviser for the Biden campaign, said in a May online event. Biden’s campaign website makes it clear that he views development aid as a “vital investment” in the success of other countries but also U.S. security and prosperity. The Central American migration crisis is a key example of this: Biden intends to expand a $750 million aid program that he spearheaded as vice president into a four-year, $4 billion regional strategy to tackle the root causes of emigration from El Salvador, Guatemala and Honduras, namely poverty, violence and corruption.

On the World Health Organization

Donald Trump: In April, as the COVID-19 crisis unfolded, Trump threatened to freeze U.S. funding to the World Health Organization (WHO) unless it underwent “major, substantive improvements” and became less “China-centric” within 30 days. Then, in July, he formally began the process of withdrawing the U.S. from the institution, saying that China has “total control” over WHO and had pressured the agency to “mislead the world” regarding COVID-19. Because the U.S. is the top WHO donor, the withdrawal, which could take at least a year, could threaten health programs around the world, according to global health experts.

Joe Biden: Biden vowed on Twitter to rejoin WHO on his first day as president if elected, reversing Trump’s decision to withdraw the U.S. He’s also said he would restore funding to the institution. Biden and his campaign have described WHO and other global institutions as “not perfect” but say that the U.S. must resume its leadership role in order to influence reform. That doesn’t “necessarily” mean the U.S. must remain the WHO’s top donor, according to the Biden campaign’s foreign policy adviser.

On helping other countries respond to COVID-19

Donald Trump: The Trump administration has donated ventilators and equipment to other countries to help with COVID-19, while USAID and the State Department have provided about $508 million to the U.N. and other aid organizations to help fight the pandemic in more than 100 countries. However, Trump refused to join the COVAX initiative, an international effort to develop an affordable COVID-19 vaccine, because of its affiliation with WHO. According to WHO, the COVAX effort would be especially helpful for sharing safe and effective vaccines across the world, including lower-income countries. Trump’s priority is “Operation Warp Speed” — his administration’s partnership with private companies to accelerate the development of COVID-19 drugs, vaccines and tests.

Joe Biden: In a March speech, Biden said that the U.S. will “never fully solve [COVID-19] if we’re unwilling to look beyond our own borders and engage fully with the rest of the world.” His COVID-19 plan includes a global response with USAID, the United States Agency for International Development, at the helm to assist “vulnerable nations.” He also plans to “re-launch and strengthen” USAID’s pathogen-tracking program, PREDICT, which the Trump administration cut three months before the first cases of COVID-19 were reported in China. Regarding vaccines, Biden hasn’t specifically said whether he would join the COVAX initiative.

Donald Trump: Trump rejects established peer-reviewed science showing that human activity, such as burning fossil fuels and industrial agriculture, is the main driver of climate change. Last year, he formally began the process of withdrawing the U.S. from the Paris climate agreement, saying that it is too costly and “disadvantages the United States to the exclusive benefit of other countries.” Officially, U.S. participation ends the day after the election. He also ended U.S. contributions to the Green Climate Fund and has frequently rolled back fossil fuel regulations.

Joe Biden: Biden has a $2 trillion climate plan and vows to rejoin the Paris climate agreement, in which countries committed to limit warming this century to 2 degrees Celsius above pre-industrial levels. He also promises to recommit the U.S. to the Green Climate Fund, which would help low- and middle-income countries “better manage the adverse effects of climate change, including conflict, migration and state fragility.”

On the reproductive rights of women and gender-based violence

Donald Trump: Every Republican since Ronald Reagan has implemented a form of the Mexico City policy, also called the “Global Gag Rule” by those who oppose it. This policy prohibits U.S. aid from going to any foreign nongovernmental organizations whose family planning efforts provide any services related to abortions, even if they’re just offering information. Under Trump, the policy was expanded to not only funds designated for family planning efforts but nearly all U.S. funding for global health. This means that if a staffer at an HIV/AIDs, malaria, nutrition or other health project even refers a client to a family planning service that talks about abortion, their agency’s funding could be affected. This broader application of the policy increased the amount of aid affected by the policy from roughly $600 million to $12 billion of planned assistance in 2018. In 2018, Trump’s Justice Department also narrowed the definition of domestic violence to harms that constitute a felony or misdemeanor, effectively eliminating nonphysical violence such as psychological, emotional or economic abuse.

Joe Biden: Biden has promised to end the Mexico City Policy. However, critics say he has an inconsistent record on abortion rights. (He once voted in favor of an amendment to allow states to overturn Roe v. Wade.) Biden has made ending gender-based violence a key focus of his platform. In 1994, he co-sponsored the Violence Against Women Act, and he plans to enact the 2019 Violence Against Women Reauthorization Act if the Senate doesn’t pass the bill.

Donald Trump: Under the Trump administration, the U.S. refugee admissions cap repeatedly hit a record low: from 45,000 in fiscal year 2018, to 30,000 the next year, then 18,000 and finally 15,000 in fiscal year 2021, which began this month. Despite the 18,000 cap for the fiscal year that just ended, admissions reached only 11,814 due to what the International Rescue Committee called “massive bureaucratic impediments” and COVID-19. “I have reduced refugee resettlement by 85 percent!” Trump claimed at a rally in Minneapolis in 2019. He told another crowd in Duluth that Biden’s plan will “[open] the floodgates to radical Islamic terrorism.”

Joe Biden: Biden says he will raise the U.S. refugee admissions cap to 125,000 and “seek to raise it over time, commensurate with our responsibility and our values.” However, some advocates have noted that it likely won’t be a quick or easy task to rebuild the asylum and refugee resettlement system after years of Trump scaling it back. Biden says he will also end Trump’s ban on immigration from seven predominantly Muslim countries (Iran, Iraq, Libya, Somalia, Sudan, Syria and Yemen).

Donald Trump: As president, Trump has repeatedly tried to slash foreign aid spending – including a 21% proposed cut this year. However, the budget has remained largely intact throughout his presidency due to opposition from Congress. He has also repeatedly proposed drastic cuts to global HIV programs, including the President’s Emergency Plan for AIDS Relief (PEPFAR), a program started by George W. Bush to combat the spread of HIV around the world. Instead Trump has boosted domestic HIV funding in line with his commitment to eradicate HIV in the U.S. by 2030. Again, Congress has managed to preserve PEPFAR funding, though it also hasn’t increased since 2009. However, U.S. Global AIDS Coordinator Deborah Birx said that the stagnant budget and Trump’s threats to cut PEPFAR funds have pushed the program to find ways to make a bigger impact without additional fundings.

Joe Biden: The Biden campaign’s foreign policy adviser Blinken said that Biden would expand foreign aid funding even amid a costly COVID-19 recovery effort because “an ounce of prevention is worth a pound of cure.” This includes funding for the President’s Emergency Plan for AIDS Relief (PEPFAR). Biden described PEPFAR in a 2018 op-ed as “one of the most-successful, effective and world-changing initiatives ever put forth by the United States government …. It’s proof that our foreign aid dollars are a smart investment that deliver real results.”

Joanne Lu is a freelance journalist who covers global poverty and inequity. Her work has appeared in Humanosphere, The Guardian, Global Washington and War is Boring. Follow her on Twitter: @joannelu

Biden Wants To Lower Medicare Eligibility Age To 60, But Hospitals Push Back

How to Read J.K. Rowling’s New Chapter Book for Free

Earth Day 2020: The Late Stephen Hawking’s Final Message To The World Is More...

Researchers Discover The Ancient Love Triangle That Made You

Walmart knocks Tesla with a claim declaring its photovoltaic panels ignited at 7 shops...