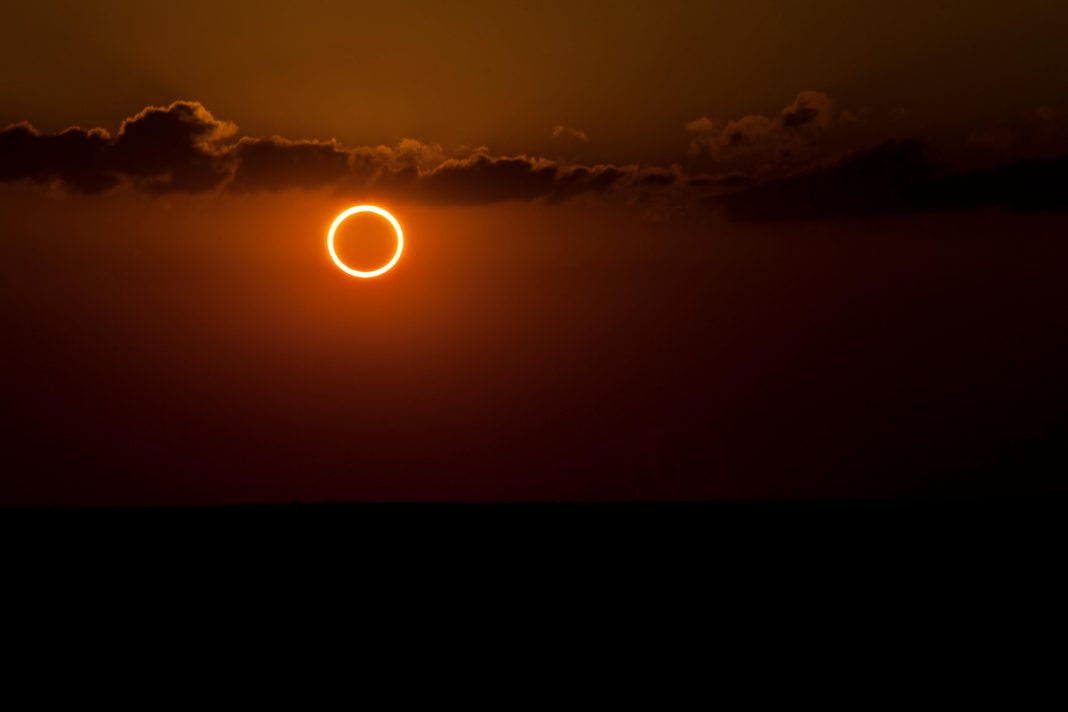 This last month it’s been Ramadan, the Islamic faith’s holy month and one of the most important times of the year for Muslims. It’s a month-long dawn-to-sunset fast the has this year been hugely affected by the lockdown, but despite its importance, Ramadan’s beginning and end is determined by something really quite tenuous—the sighting of the young Moon.

It’s New Moon this week. On Friday, May 22, 2020 at 17:38 Universal Co-ordinated Time (UTC) the Moon will enter its new phase as it slips roughly between the Earth and Sun on its monthly orbit.

Precisely one orbit of the Moon later—at the instance of New Moon on Sunday, June 21, 2020—our satellite will cover 99.5% of the Sun, causing a rare “ring of fire” annular solar eclipse. It will be visible across much the Islamic world, from the Congo to the Democratic Republic of Congo, South Sudan, Ethiopia, Eritrea, Yemen, Oman, Pakistan, India, Tibet, China and Taiwan.

An annular solar eclipse occurs when the Moon is far from Earth on its monthly elliptical monthly orbit, so appears to be smaller in the sky than the Sun (a “micro moon”, the opposite of a supermoon). Therefore, when the conditions are right for an eclipse, the Moon only covers the center of our Sun.

A New Moon is invisible since only its far side is lit-up. No, there is no “dark side of the Moon”—only a side we cannot see from Earth. That’s because the Moon is tidally-locked to Earth, so only shows us one “face.” However, when the New Moon moves away from the Sun, observers can suddenly see a super-slim crescent. That’s only visible very briefly after sunset after the New Moon. So exactly when the young Moon is sighted for the first time is a bit of a conundrum for Muslims.

Muslims call it the “Shawwal Moon” because it occurs in the tenth month of the Islamic calendar, which is based on the phases of the Moon. That’s why the exact dates of Muslim holidays change every year. The need for Moon sightings make it even less predictable.

The sighting by astronomers of the “Shawwal Moon” heralds the start of Eid al-Fitr, also called the “Festival of Breaking the Fast.” It’s a massive holiday celebrated by Muslims across the world, and involves all kinds of events, gifts, receptions—and the performance of communal prayer at daybreak on its first day—so its timing would be helpful to know in advance.

Ramadan is predicted to cease with the sighting of the “Shawwal Moon” after sunset on Saturday, May 23, though it will only be about 0.5% illuminated, and above the horizon for only a very short time after sunset. The following evening the crescent Moon will be higher in the sky and 3% illuminated beside the planets Mercury and Venus, so it may be that Ramadan officially ends on Sunday, May 24, 2020.

Disclaimer: I am the editor of WhenIsTheNextEclipse.com

How Mary Anning Went To Mars

How to include an Apple Card to your other Apple gadgets, like an iPad,...

Smoketree Photos: The Ghosts of the North American Desert

We’re not prepared for the deepfake transformation video